Maria Czepiel, who discovered the new poem by Spain's greatest Renaissance poet, at a conference in Naples to present her findings. Photo Credit: Clara Marias

By Maria Czepiel, who has recently submitted her doctorate and is a stipendiary lecturer at Brasenose and Balliol colleges. Her DPhil was in the Faculty of Medieval and Modern Languages and funded by the Open-Oxford-Cambridge Doctoral Training Partnership.

Garcilaso de la Vega (1501-1536), Spain’s greatest Renaissance poet, was in equal parts man of action and bard: as he writes in one of his poems, his life consisted of taking up ‘now the sword, now the pen’ (‘ora la espada, ora la pluma’).

He was part of the court of the Habsburg king and Holy Roman Emperor Charles V, and took part in battles and campaigns in Europe and North Africa. However, his career was not without hiccups; in 1532, he was condemned to exile by the king for having participated in the wedding of his nephew (which did not have the king’s approval). He spent some months confined to an island on the Danube near Ratisbon, before being sent to Naples in the service of the Spanish viceroy. In the years that followed, he reported to the king on various sensitive political and diplomatic issues, which seems to have earned him back the monarch’s good graces. He died of wounds received in battle in 1536.

While I was studying for my DPhil, I came across a 16th century printed book of Latin poetry...I was excited to find previously unidentified copies of the three Latin odes by Garcilaso.

As a poet, he is particularly famous for introducing classical and Italian forms such as eclogues, elegies and odes into Spanish poetry. As well as writing in Spanish, in his day, Garcilaso was also praised for his poetry in Latin. Unfortunately, until recently only three of his Latin odes were extant. We also knew, from a letter by the Italian humanist and poet Pietro Bembo, that Garcilaso had dedicated an ode to him, and that Bembo was especially pleased by it, but no copies of it survived.

While I was studying for my DPhil, I came across 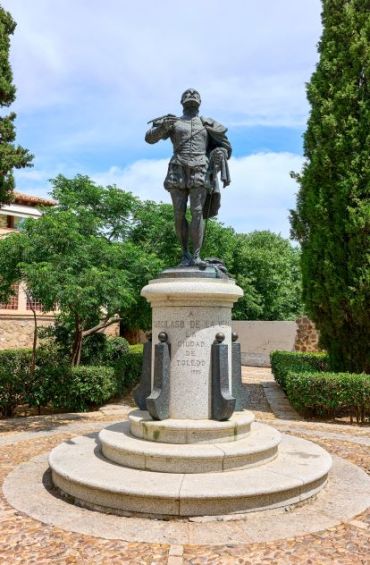 A statue of the renowned Garcilaso de la Vega in his home town of Toledo. Credit: Shutterstock
a 16th century printed book of Latin poetry [the book is in the Czech Republic but I saw the digitised form whilst in Oxford]. It had a further collection of poems written out by hand in the back. Among them, I was excited to find previously unidentified copies of the three Latin odes by Garcilaso. I was even more excited to notice the poems were followed by two more poems attributed to Garcilaso, and one of them was the poem dedicated to Bembo which had been lost for almost 500 years.

In his ode to the Italian, Garcilaso modestly claims he is not a very good poet, but that if he were, he would use his gifts to extol Bembo. He then goes on to do exactly that and praise Bembo’s poetry and work as an historian of Venice. Part of the aim of Garcilaso’s poem must have been to gain the approval of the older poet, which would admit him into the most elite literary circles of the period. (The strategy worked: Bembo wrote back to Garcilaso saying that he not only exceeded all Spanish poets, but even gave the Italians a run for their money.)

I was even more excited to notice the poems were followed by two more poems attributed to Garcilaso, and one of them was the poem dedicated to Bembo which had been lost for almost 500 years

The second poem is addressed to a German poet called Johann Alexander Brassicanus, who was not previously known to have a connection with Garcilaso. The poem describes tents and armies on the banks of the Danube, which suggests it refers to the period of exile. Until now, we have only had negative impressions of Garcilaso’s time in Germany, when he says he was ‘imprisoned […] in a foreign land’ (‘preso […] en tierra ajena’) and separated from his wife and family.

Now we have a more positive view, since in this poem Garcilaso speaks warmly of a friendship he made during that time: Brassicanus is ‘Among the first of my companions, bonded | To Lassus by undissolvable law | To the end of my life’ (‘sodalibus | In primis habite, indissociabili | Lasso lege revincte | Vitae tempora ad ultima’, 1–4). In short, these two poems give us new insights both into Garcilaso’s aspirations as a poet, as well as into parts of his fascinating life as a man of action.

I wrote an article about my discovery which has just come out in the Bulletin of Spanish Studies (https://www.tandfonline.com/doi/full/10.1080/14753820.2022.2122386). I hope the find will stimulate more interest in Garcilaso’s life and Latin poetry, and perhaps more odes will turn up when we least expect it.