As the planet warms, and our population grows, there is an ever-increasing pressure on natural resources.  It has been estimated that ‘stressed’ crops - from changing weather patterns, drought, flooding and extreme temperature - may reduce production by as much as 70%, which will have devastating impact on our ability to feed the world.

‘It’s becoming increasingly clear that such post-translational regulation of chloroplast proteins is vital for plant growth and productivity, and thus of course for food production’. Professor Paul Jarvis

It has become increasingly urgent that we develop improved crop varieties - plants with enhanced nutritional value or resilience to adverse environments - and key to this development will be our understanding of the molecular basis of plant stress tolerance.

New research from the University of Oxford, published recently in the journal eLife, sheds fresh light on plant chloroplasts, and the proteins inside them. The regulation of chloroplast proteins is important for plant development and stress acclimation and is increasingly significant as plants - including our staple crops, wheat, rice, barley - are having to respond to our changing environments.

‘As the planet warms, it will be increasingly urgent to understand the molecular basis of plant stress tolerance.’ Dr Samuel Watson

All green plants grow by converting light energy into chemical energy via a process known as photosynthesis. Photosynthesis occurs within specialised compartments of plant cells known as chloroplasts. Chloroplasts require thousands of different proteins to function, and these are imported into the chloroplast via a specialised machinery known as the TOC complex. The TOC complex is, itself, made of proteins.

Recent studies revealed that the TOC complex is rapidly destroyed when plants encounter environmental stress - this protects plant cells from damage by limiting photosynthesis, which can generate toxic by-products under adverse conditions. This process has been named CHLORAD, for “chloroplast-associated protein degradation”. 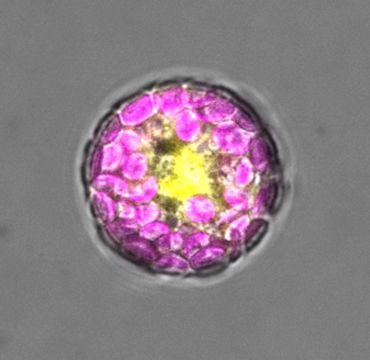 Plant cell (a protoplast) expressing the SUMO1 protein tagged with yellow fluorescent protein (YFP); the chloroplasts inside the cell are coloured magenta in this image

In CHLORAD, the TOC complex is first marked with a small protein called ubiquitin. This ‘ubiquitination’ promotes the destruction of the complex, and thus suppresses chloroplast protein import, photosynthesis, and the production of toxic by-products.

‘This study has uncovered another layer of complexity within the systems that plants use to control their chloroplasts.’ Professor Paul Jarvis

In this study, researchers asked whether the TOC complex is also SUMOylated - SUMO is another small tag that is similar to ubiquitin - and, if so, what the function such TOC SUMOylation is.

The researchers found that the TOC complex is indeed SUMOylated, and that TOC SUMOylation also triggers the destruction of the TOC complex and is important for plant growth and development. These results are intriguing, as they indicate that SUMO action is very similar to that of CHLORAD, in this context.

In fact, the observed similarity with CHLORAD implies that SUMOylation regulates the activity of the CHLORAD pathway. This is particularly interesting, as SUMOylation is known to be induced by various forms of environmental stress and is a key driver of plant stress acclimation.

Professor Paul Jarvis, who supervised the work said: ‘It was remarkable when the role for ubiquitination, and CHLORAD, was discovered a few years ago, and this new role for SUMO just adds to the intrigue.’

Building on these discoveries, the researchers are currently exploring how the CHLORAD pathway can be manipulated to improve crop performance. Better understanding of the regulation of chloroplast protein import and/or the CHLORAD pathway, delivered as a result of the new findings reported here, will help to guide these efforts.