Liz Frood walks through the temple complex at Karnak, Luxor.

By Elizabeth Frood, Associate Professor of Egyptology in Oxford's Faculty of Oriental Studies

An Egyptologist undertaking fieldwork in Egypt? It doesn’t sound very surprising, does it? Perhaps the subject of that research – ancient graffiti scribbled on temple walls – might be a little more startling. But I am that Egyptologist, and, as I sit in my office in the Sackler library in Oxford a few days after returning, I’m not just surprised, I’m completely stunned. Three years ago I didn’t think it would be possible to return to my work in Oxford, let alone go to Egypt. But I did it, and I still can’t quite believe it.

In August 2015 I went into septic shock due to an infection of unknown origin. The resulting damage to my body was catastrophic: I lost both my legs below the knee, the hearing in my right ear, the internal structure of my nose, and, I reckon worst of all, almost all the function in my hands. My major research project in Egypt, ongoing since 2010, has been to record, analyse and publish graffiti inscribed on the walls of the temple complex at Karnak, on the east bank of the Nile in Luxor. For me, epigraphic recording by drawing had been crucial to understanding the meaning of the graffiti. By drawing I could begin to access an individual’s decision to scribble their name, their image, or a picture of a god, at a particular time and in a particular place. For the longest time I thought my loss of manual dexterity would spell the end of this project.

Thanks to an invitation from Marie Tidball to speak about my fieldwork as part of her TORCH Disability and Curriculum series in October 2017, I began to tentatively explore possibilities for access and recording. It seemed completely abstract to me then – I think I used the word “fantasy” at least two or three times – but it got me thinking and moving forward. I started planning to go.

On September 17 this year I boarded a plane to Luxor, together with my husband Christoph and my three-year-old son Emeran. This first step was really only possible because of very recent radical improvements in my mobility on prosthetic legs and the increased stability and adaptability of what is left in my hands. And, of course, like any fieldwork project, it took a team – my “superteam”, which also included my photographer cousin Jane Wynyard, and two research assistants and coinvestigators, Chiara Salvador and Ellen Jones, postgraduate students in Egyptology at Oxford.

I tried to keep my expectations low (I can hear members of the superteam guffaw as they read this). I wanted to get a sense of the possibilities of Karnak for me as a site. This included testing different methodologies that would enable me to continue working on the graffiti, from ways of collating the drawings I had done before my illness to how we might make future recording possible. 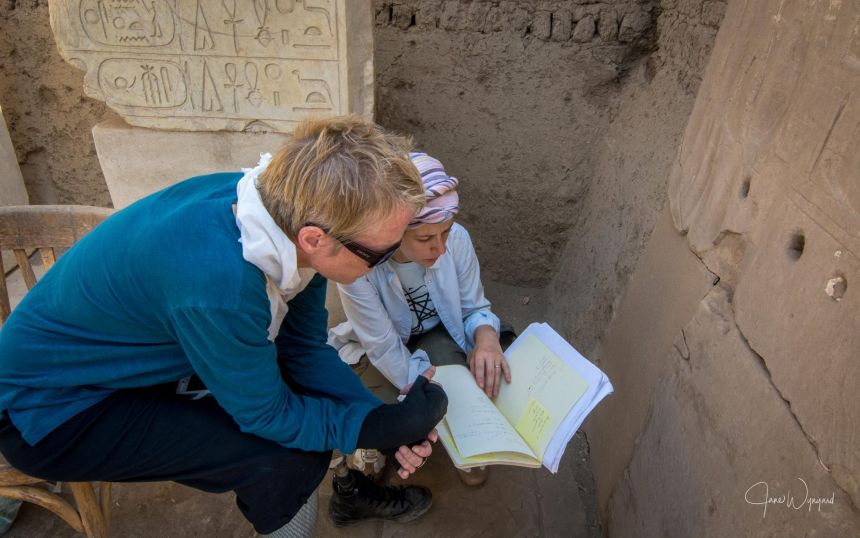 Liz and Chiara collating and discussing the graffiti.

The first few days were overwhelming. It was incredible to be able to see friends and colleagues whom I hadn’t seen since before I got sick. I cried a lot. I laughed a lot. And I walked a lot, into and around the temple.

I’m lucky that Karnak is a relatively flat site. Wheelchair access has also been made a priority here, thanks to the efforts of the Ministry of Antiquities and dedicated local campaigners. This afforded me smooth, even pathways to one of my project sites – the eighth pylon, a massive gateway in the south of the complex with a graffitied staircase inside. The sandy route to my other project site – a small temple dedicated to the god Ptah bearing many hundreds of graffiti – required a little more concentration and work, but I managed it.

One of the biggest physical challenges for me was, unsurprisingly, the heat. Temperatures could soar to 45 degrees. Prosthetic legs are heavy, hot and clammy under normal circumstances. So getting to my graffiti was a triumph. I had to keep reminding myself of this as I gradually lost perspective over the coming days.

Once I was there, standing in front of the graffiti, anxious about how much work there was left to do, I felt completely and utterly useless. If I couldn’t physically do anything to record, was there any point in me being there? Was I wasting time and money just to make a point? Grief is a sneaky beast – I knew it would hit while I was there, but I didn’t expect it to keep hitting.

Consultation with my team was needed, emotionally and analytically. We talked things through, strategised carefully, and decided to try different ways for me to work. At Ptah, Chiara and I examined our drawings against the originals, and discussed what changes and corrections were needed. I gradually became better at articulating what I saw and how I would have drawn them, so that she could write and draw for me. I struggle so much with feeling dependent. But I began to see this simply as a brilliantly productive extension of the collaborative process that is at the heart of archaeological fieldwork.

I even managed to assist Christoph, my archaeologist husband, to begin digitially mapping the location of the graffiti using an instrument called a “total station”. Incidentally, after 13 years together this was the first time he and I have collaborated in the field!

Ellie undertook photogrammetry to create 3D models and orthophotographs of graffiti whose readings are still problematic, or those which are too high for me to access (I’m not up to climbing ladders just yet). Perhaps all this digital recording is a first step towards creating some virtual reality reconstructions of these graffitied spaces that I, or anyone, can move around in and explore via a computer screen? This was one of my fantasies from the TORCH seminar. It is most certainly an extremely efficient and effective way of creating images that we can now manipulate and work with here in Oxford.

Ellie was also responsible for surveying and checking some of the graffiti at the eighth pylon. As part of this work she took photographs of some highly unusual yellow painted graffiti that I had identified back in 2014. In the course of processing these photographs through a computer program called D-Stretch, Ellie discovered new yellow painted graffiti in the same area. We couldn’t quite believe it, although I should have known better... there is always more graffiti! Such a buzz!

There is no doubt that our work on the graffiti in Karnak has been moved forward significantly by our two weeks there. And I no longer harbour doubts about my role in the field. I need to be there for the continuation and completion of the project. I need to be standing before these walls, climbing these stairs, moving through these gateways, with my team, discussing, observing, feeling…

Some 3,000 years ago very many priests and scribes, even the temple “chef-pâtissier”, sought out shady places or places with good views of processions, festivals or just the temple itself, and decided to leave their names or draw a picture. Often they carved deeply into the stone, and at least one or two thought to use bright yellow paint. Every time I go to Karnak and find their names, I understand a little bit more about what they were trying to do. And I now know that I can continue to go to Karnak to do this. This is both extraordinary and exactly as it should be.