The jumping mechanism of the miniature robots was inspired by Click Beetles. Image credit: Shutterstock.
Published

Inspired by jumping insects, University of Oxford researchers have helped develop a miniature robot capable of leaping more than 40 times its body length- equivalent to a human jumping up to the 20th floor of a building. The innovation could be a major step forward in developing microrobots for a wide range of applications.

Despite their small size, insects can be phenomenal jumpers, capable of leaping many times their body length with astonishing speed. Researchers have now successfully mimicked these capabilities in a miniature robot that can store a large amount of potential energy then rapidly release this to power a jump.

The team anticipate that the design could ultimately enable the production of fully-autonomous miniature robots, capable of navigating unfamiliar terrain and self-righting themselves. Their ability to access small spaces could make them useful in precision agriculture and performing maintenance on large machines like turbines and jet engines. 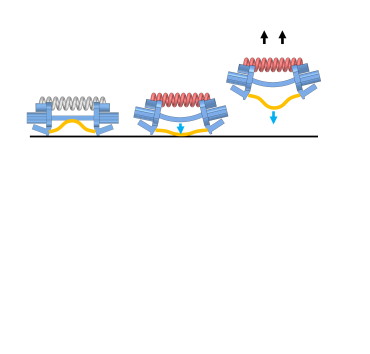 Diagram of the jumping mechanism in the miniature robots. A coiled muscle contracts and causes a stainless-steel beam to buckle, which stores elastic energy. When the beam buckles against a rigid rail, it rapidly ‘snaps-through’ and inverts, hitting the ground and releasing the stored energy to power the jump. Image credit: Yuzhe Wang, Joan Wang and Sameh Tawfick.
Weighing less than 14 grams, the tiny robot was inspired by click beetles, which can jump without using their legs using a ‘snap-buckling instability’ through which an elastic object rapidly jumps from one state to another. When click beetles need to execute a jump, for instance to avoid a predator or to right themselves, they rapidly snap their bodies against the ground to power the leap. Their bodies store elastic energy in a flexible hinge between the head and abdomen. This is initially controlled using an internal latch that can keep the beetle’s body in a bent position but when triggered, the hinge is released and the beetle’s body unbends extremely quickly, resulting in a powerful jump.

The robot mimics the click beetle’s mechanism by having a deformable body containing a stainless-steel beam that is attached to a coiled, artificial muscle made of nylon fibres. When the muscle contracts, the beam buckles, which stores elastic energy. Ultimately, the beam buckles against a rigid rail, causing it to rapidly invert and hit the ground, releasing the stored energy which powers the jump.

To develop the initial prototype, researchers at the University of Illinois and Princeton University, USA, adopted a trial and error approach similar to natural selection. Using a 3D printer, they produced hundreds of different designs, taking the best-performing versions forward at each stage. Professor Dominic Vella and Dr Mingchao Liu from the University of Oxford’s Mathematical Institute then developed a mathematical model to describe the different physical components of the jump, which allowed the design to be optimised even further. Finally, the team added a light sensor and a microcontroller, so that the robot would jump in response to a light signal.

Professor Vella (Mathematical Institute, University of Oxford) said: ‘This robot combines the best of natural design and man-made innovation. Insects can move extremely quickly but can’t store large amounts of energy because they are limited by natural materials, while robots typically store a large amount of energy but release this relatively slowly. Because energy is stored in our robot in a stainless-steel beam, it can achieve a high energy density to power even higher jumps than click beetles; because our robots mimic the beetle’s jumping technique, their jump is faster than typical robots.’

‘Perhaps the most astonishing finding from our model was the sheer level of acceleration’ he added. ‘During the jump, the robot reaches a peak acceleration of 250G. In comparison, an astronaut in the launch of a space rocket reaches around 3G, and humans blackout at around 9G.’

Dr Liu (Mathematical Institute) said: ‘We anticipate that in the future fleets of insect-inspired robots can be adapted for use in natural disaster scenarios, search and rescue missions, hazardous environments, or other situations where larger robotic platforms are inaccessible, and jumping is the most effective way to manoeuvre at a small scale in cramped spaces.’

The research has been published in Proceedings of the National Academy of Sciences.

Snap-buckling instability is the same mechanism that powers children’s popping toys. You can find out how it works in the video below, produced by The Mathematical Observer; a YouTube channel which showcases the research performed in the Oxford Mathematical Observatory.