A collaborative project between the University of Oxford and charity Save the Elephants used handheld satellite GPS to track elephant footprints to investigate how their movements are affected by the diversity of plant species. Image credit: Shutterstock.
Published

As human-elephant conflict continues to rise across Africa, researchers are searching for new ways to keep a watchful eye on wild African elephants, even looking to space technologies for guidance. 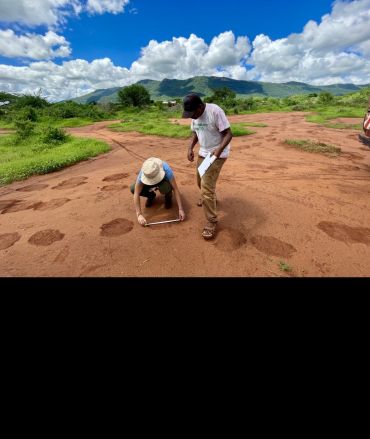 Emmanuel Mwambingu, Save The Elephants’ field officer, and Connor Bennet, Save The Elephants’ international intern taking elephant footprint measurements to determine the age of the elephants that came into the community area following an elephant crop-raid incident in Sagalla, Taita-Taveta county in 2022. Image credit: Kat Finch.
In the rural community of Sagalla in Tsavo Kenya, a hotspot for crop-raiding elephants, researchers at the University of Oxford’s Department of Biology collaborated with the charity Save the Elephants on a unique project to investigate how plant diversity on a micro scale affects elephant movement. For the first time ever, they tracked the footprints of elephants using a high-resolution hand-held Garmin GPS that captures point to point fixes at every 3-5 seconds, and overlaid it with free high-resolution satellite imagery.

In the process, they discovered that elephants make considered decisions about which paths to take based purely on their favourite food. The findings may be critical in helping conservationists forecast potential human-elephant conflict hotspots.

The Sentinel 2A imagery, obtained through an open-source satellite managed by the European Space Agency, has enabled scientists to map every single piece of vegetation within each 10m pixel in and around Sagalla. While elephants are normally tracked at 1-hour intervals, the handheld satellite GPS captures all the twists and turns, every thorny thicket, every tree that an elephant would take on its chosen path. The elephant data from the study covers the period from January 2015 to 2020.

The insight that different compositions of elephant groups prefer different vegetation patches could help us better understand where elephants are moving to within community areas to focus mitigation efforts, and also will promote better understanding for management of vegetation quality and composition inside wildlife reserves to keep parks more attractive to elephants inside than outside.

Dr Lucy King, Department of Biology, University of Oxford and Head of Save the Elephant’s Co-existence Programme.

The study is important because understanding how elephants access their favourite vegetation could help conservation managers focus resources onto potential conflict hotspots outside protected areas and better protect plant diversity within parks and buffer zones. Mapping the location and composition of specific vegetation species within plant communities also helps scientists to better understand the impact of human encroachment and vegetation removal on elephant movement.

Save the Elephants, the University of Oxford and the Sagalla community have been working together since 2009, starting with a project to explore how beehive fences could be used to reduce conflict with elephants. The satellite imagery project came about when the Sagalla community asked the researchers to help them better understand why and where elephants were foraging in the buffer zone of vegetation between the houses and the park boundary.

Lead author Gloria Mugo, from Save the Elephants, said: ‘It is incredible the level of detail we can infer from free satellite imagery about the processes that control the spatial dynamics of elephant movements. A lot is known about what kinds of foods are eaten by elephants, however, being able to single out the fact that their movements can be driven by their fancied, gender-based diet, helps to further our understanding of micro-level ecological interactions.’

The paper ‘Mapping Floristic Composition Using Sentinal-2A and A Case Study Evaluation of its Application in Elephant Movement in Sagalla, Tsavo’ has been published in the journal, Remote Sensing.