An estimated 100,000 elephants were killed for their ivory between 2010 and 2012 according to new research by a team including Oxford University scientists.

An average of 33,630 elephants is calculated to have been lost in each of the three years (2010, 2011 and 2012), with preliminary data indicating that this death rate continued into 2013. The number of elephants remaining in Africa is uncertain, but these losses are driving declines in the world's wild African elephants on the order of 2-3% a year.

The study, published in PNAS, provides the first verifiable estimation of the impacts of the ongoing ivory crisis on Africa's elephant populations. The researchers drew on data and experience from an Africa-wide intensive monitoring programme. The most thoroughly studied site was Samburu in northern Kenya where every birth and death over the past 16 years has been recorded in a long-term monitoring project co-founded by Iain Douglas-Hamilton of Oxford University's Department of Zoology and George Wittemyer of Colorado State University, for Save the Elephants. The work is done in association with the Kenya Wildlife Service.

'Witnessing the killing of known elephants, some that we have followed since they were born, has been terrible,' said Wittemyer, the lead author on the paper. 'Our data has become the most sensitive barometer of change during this poaching epidemic. We needed to quantify the scale of killing and figure out how to derive rigorous interpretation of poaching rates.'

The researchers determined illegal killing in Samburu began to surge in 2009. This surge was directly correlated to a more than quadrupling of local black-market ivory prices (the poacher's price) and tripling in the volume and number of illegal ivory seizures through Kenyan ports of transit. The data also show that the destination of the illegally trafficked ivory increasingly shifted to China.

The team used the intensive study of the Samburu elephants as a 'Rosetta stone' to translate less detailed information from 45 elephant populations across Africa to estimate natural mortality and illegal killing rates to model population trends for the species. The CITES-mandated global programme known as Monitoring of Illegal Killing of Elephants (MIKE) establishes cause of death for each elephant carcass found in these sites and this has provided the best measure of poaching pressure.

Over the last decade, the Proportion of Illegally Killed Elephants (PIKE) has climbed from 25% to 60-70%. Such figures are causing alarm amongst conservationists, as the study shows over 54% is a level of poaching that elephant birth rates are unable to overcome and will lead to population decline.

To establish figures rather than proportions, two types of model were used: One focused on the elephant populations with the best information and used them as an indicator for the conditions in their region of Africa. The other used proxy variables such as Chinese consumption rates, a corruption index, and poverty rates to estimate illegal killing in 300 sites. Both came to similar conclusions.

While the timing and magnitude of declines differed by region in Africa, with central Africa experiencing the worst levels, all regions of Africa are facing unsustainable levels of ivory poaching with the killing peak in 2011 equating to over 40,000 elephant deaths.

'It's a complex situation for elephants across Africa, with some populations – such as in Botswana – still increasing. History has taught us that numbers alone are no defence against attrition from the illegal ivory trade, and this new work confirms that elephant numbers are decreasing in East, Central and parts of Southern Africa,' said co-author Iain Douglas-Hamilton of Oxford University, founder of Save the Elephants.

'This study helps make sense of the challenge faced by thousands of rangers working on the front lines to protect elephants and other species across Africa,' said co-author Julian Blanc of the Convention on the International Trade in Endangered Species (CITES) secretariat. 'It also highlights the importance of the accurate collection of data as part of their day-to-day patrol work, which is essential to understand and communicate the true proportions of the threat that elephants face.' 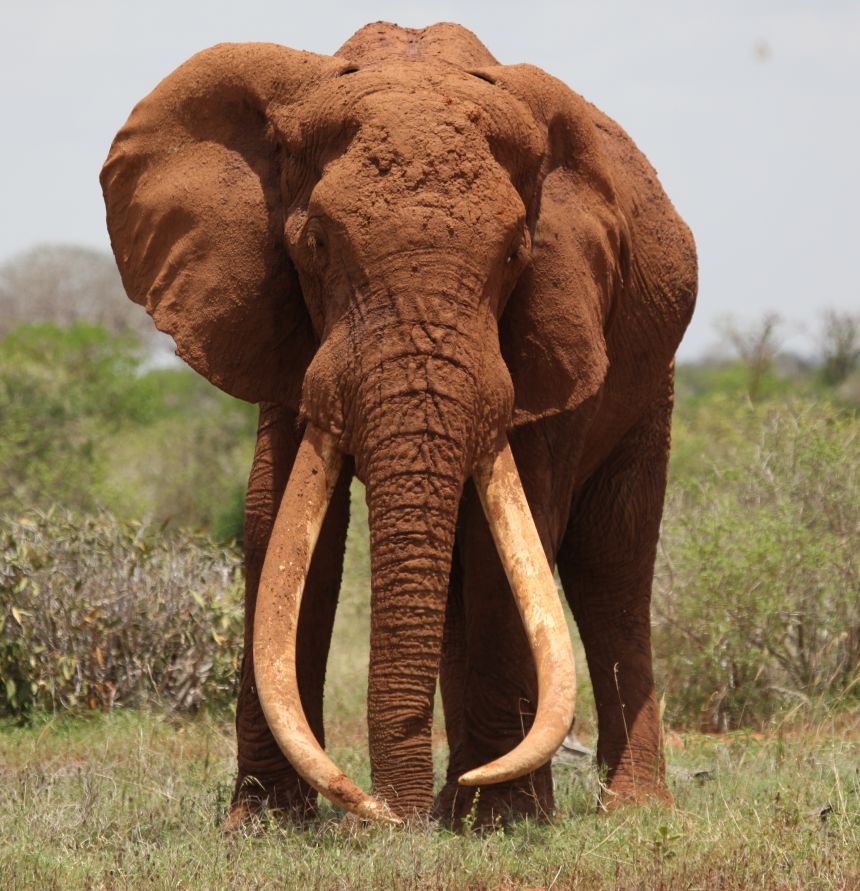 Satao, a bull elephant who was killed for his ivory in June 2014
Photo: Richard Moller