A fragment of the Winchcombe Meteorite. Credit: Trustees of the Natural History Museum, NHM.
Published

Researchers from the University of Oxford’s Departments of Physics and Earth Sciences have contributed to a highly detailed analysis of the Winchcombe meteorite which fell to Earth last year. The results, published today in Science Advances, shed light on early solar system conditions and support the theory that meteorites catalysed the emergence of life on Earth.

Meteorites can offer an invaluable window into the early solar system, since most originate from asteroids that formed in the same era as the planets (4.5 billion years ago). When they land on Earth, however, the fragments usually become contaminated and less informative. But on Sunday 28 February 2021, planetary scientists received a gift from the heavens when a fireball hurtled through the skies over the UK, eventually smashing to a halt on a driveway in Winchcombe, Gloucestershire. Within hours, researchers were at the scene to recover the resulting fragments and securely store them. As a result, the Winchcombe meteorite fragments are some of the most pristine available for analysis.

Overseen by the Natural History Museum in London, the Winchcombe fragments were distributed to multiple institutions around the UK, including the University of Oxford, for one of the most comprehensive meteorite analyses ever undertaken. 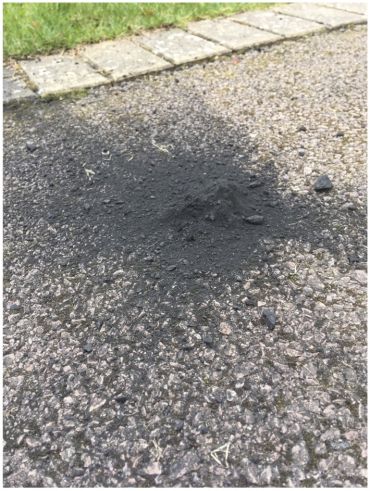 The main mass of the Winchcombe meteorite recovered by the Wilcock family on 1 March 2021. Credit: Rob, Cathryn and Hannah Wilcock.
A witness from the early solar system

At the University of Oxford’s Department of Physics, the fragments were analysed by Dr Katherine Shirley using infrared spectroscopy to map the meteorite’s mineral composition. This helped to confirm that the Winchcombe specimen belongs to a rare class of meteorites called CM carbonaceous chondrites, which originate from primitive asteroids in the asteroid belt. It is the first ever meteorite of this type to be found in the UK.

Other academic institutions involved in the study carried out detailed imaging and chemical analyses which found that the Winchcombe meteorite contains approximately 11% extra-terrestrial water (by weight). Most of this is locked-up in minerals that formed during chemical reactions between fluids and rocks on its parent asteroid in the earliest stages of the solar system. Furthermore, the ratio of hydrogen isotopes in the water closely resembled the composition of water on Earth.

Extracts from the Winchcombe meteorite also contained extra-terrestrial amino acids – prebiotic molecules that are fundamental components for the origin of life. As the composition of the Winchcombe meteorite is largely unmodified by the terrestrial environment, these results indicate that carbonaceous asteroids played a key role in delivering the ingredients needed to catalyse oceans and life on the early Earth.

Another key strand of the analysis was to assess the magnetic composition, which was led by the University of Oxford’s Department of Earth Sciences. James Bryson, Associate Professor of Mineralogy, explained: ‘The magnetic composition of a meteorite acts like an internal hard drive memory of the conditions during its formation. We found that there is a particularly high abundance of a magnetic phase called magnetite present in an exotic and uncommon form. This type of magnetite only forms under specific conditions, so this tells us that Winchcombe had a unique history. Our ongoing investigations are now trying to figure out exactly what this was.’

This future work will make use of the Department’s new, cutting-edge geo-quantum diamond microscope, one of only two in Europe. ‘This machine will enable us to perform magnetic analysis on much smaller samples than before, opening up a completely new avenue of research. It will bring a new lease of life into planetary sciences’ said Professor Bryson. 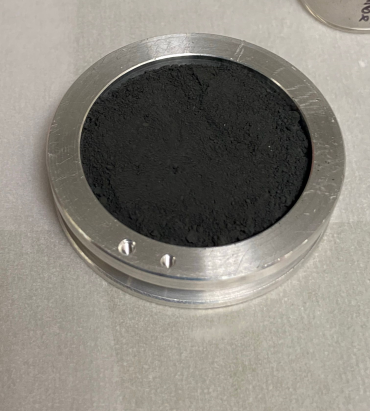 The powdered Winchcombe meteorite sample used in the study at the University of Oxford. Credit: Dr Rowan Curtis.
Tracing a path to Earth

Meanwhile, investigations by Dr Rowan Curtis (Department of Physics) could help to trace the path by which the Winchcombe meteorite made its way from the asteroid belt to Earth. Using a machine called a goniometer, he measured how light scattered across the surface of the meteorite, enabling improvements in asteroid thermal models and further constraints to be placed on the Yarkovsky effect. ‘When one side of an asteroid is illuminated by the Sun, it creates a differential heating effect that acts as a propeller,’ he explained. ‘Over long time periods, this effect can influence the trajectory of an asteroid. By mapping in detail variations in light scattering and thermal absorption, we can more accurately trace the path of the Winchcombe meteorite in reverse.’

The team agree that it has been a privilege to work on such a pristine sample, but their thorough analyses have also been the ideal pilot for future investigations. For example, the University of Oxford is part of NASA’s OSIRIS-REx mission, which aims to return samples from a “primitive” carbonaceous asteroid in the solar system named Bennu. The spacecraft is scheduled to return to Earth in September 2023.

The study ‘The Winchcombe meteorite, a unique and pristine witness from the outer solar system’ is published in Science Advances.