An international collaboration of scientists has performed the most precise measurement of the W boson yet – asking questions of the Standard Model of Particle Physics.

International scientists have taken the most precise measurement of the W boson to date – determining the mass of the W boson with a precision of 0.01%. The new measurement, published today in Science deviates from the W boson mass as predicted by calculations from theoretical physicists using the Standard Model of Particle Physics.

Professor Chris Hays, Department of Physics, University of Oxford said: ‘The CDF [Collider Detector at Fermilab] measurement was performed over the course of many years, with the measured value hidden from the analyzers until the procedures were fully scrutinized. When we uncovered the value, it was a surprise.’

Devised in the 1970s, the Standard Model of Particle Physics is the current thinking that best describes the building blocks of the universe and three of the four fundamental forces of nature: strong force, weak force and electromagnetic force. The W boson is one of the particles that make up the weak force – its interaction with proton and neutron particles cause the nuclear fusion reactions that ‘power’ the stars.

Although there are forces and ideas which are incompatible with the Standard Model, such as gravity or dark matter, the model has successfully explained a variety of phenomena even before the predictions could be proven with experimentation. 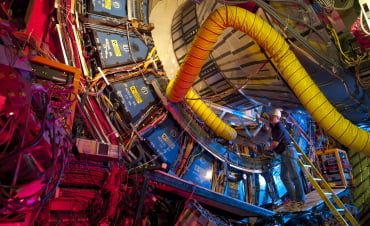 CDF detector inside the collision hall

The ten-year evaluation process used 4.2 million data ‘events’ collected from the CDF experiment at the Tevatron Collider at Fermilab in the US to produce a measurement twice as precise as previous measurements. Every collision produces hundreds of other particles as well as the W boson, which only lasts momentarily, making it extremely difficult to analyse data and measure the mass.

Professor Daniela Bortoletto, Department of Physics, University of Oxford said: ‘The precision achieved by this measurement is outstanding. The result is intriguing since it seems to indicate a discrepancy with the Standard Model predictions. It will add to the pressure on the LHC [Large Hadron Collider – the world’s largest particle accelerator] experiments to complete their analyses with the data samples already collected to improve our knowledge of this critical parameter of the Standard Model.’

‘While not yet conclusive, the new W mass measurement adds to a growing list of results that deviate from Standard Model predictions. These results may be the first steps to an expanded model of particle physics, raising the exciting possibility of more discoveries at the LHC,’ added Professor Hays.

The new W boson mass measurement is the most precise to date, but there are some disagreements with calculations from other collider experiments. Future measurements will help to explain why these differences exist.

The full paper, 'High-precision measurement of the W boson mass with the CDF II detector' is available to read on Science.