Iron is an essential nutrient that almost all life requires to grow and thrive. Iron’s importance goes all the way back to the formation of the planet Earth, where the amount of iron in the Earth’s rocky mantle was ‘set’ by the conditions under which the planet formed and went on to have major ramifications for how life developed. Now, scientists at the University of Oxford have uncovered the likely mechanisms by which iron influenced the development of complex life forms, which can also be used to understand how likely (or unlikely) advanced life forms might be on other planets. The work was published today in PNAS.

‘The initial amount of iron in Earth’s rocks is ‘set’ by the conditions of planetary accretion, during which the Earth’s metallic core segregated from its rocky mantle,’ says co-author Jon Wade, Associate Professor of Planetary Materials at the Department of Earth Sciences, University of Oxford. ‘Too little iron in the rocky portion of the planet, like the planet Mercury, and life is unlikely. Too much, like Mars, and water may be difficult to keep on the surface for times relevant to the evolution of complex life.’

Initially, iron conditions on Earth would have been optimal to ensure surface retention of water. Iron would have also been soluble in sea water, making it easily available to give simple life forms a jumpstart in development. However, oxygen levels on Earth began to rise approximately 2.4 billion years ago (referred to as the ‘Great Oxygenation Event’). An increase in oxygen created a reaction with iron, which led to it becoming insoluble. Gigatons of iron dropped out of sea water, where it was much less available to developing life forms. 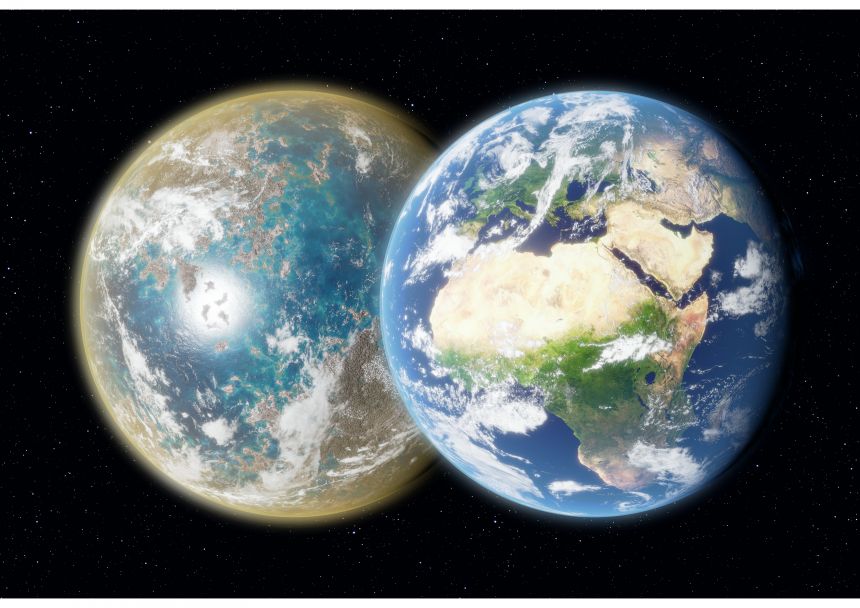 Early Earth on the left, had seas infused with life-enhancing iron, whereas Earth today, seen on the right, does not.

'Life had to find new ways to obtain the iron it needs,’ says co-author Hal Drakesmith, Professor of Iron Biology at the MRC Weatherall Institute of Molecular Medicine, University of Oxford. ‘For example, infection, symbiosis and multicellularity are behaviours that enable life to more efficiently capture and utilise this scarce but vital nutrient. Adopting such characteristics would have propelled early life forms to become ever more complex, on the way to evolving into what we see around us today.’

The need for iron as a driver for evolution, and consequent development of a complex organism capable of acquiring poorly available iron, may be rare or random occurrences. This has implications for how likely complex life forms might be on other planets.

‘It is not known how common intelligent life is in the Universe’ says Prof Drakesmith. ‘Our concepts imply that the conditions to support the initiation of simple life-forms are not enough to also ensure subsequent evolution of complex life-forms. Further selection by severe environmental changes may be needed – for example, how life on Earth needed to find a new way to access iron. Such temporal changes at planetary scale may be rare, or random, meaning that the likelihood of intelligent life may also be low.’

However, knowing now about how important iron is in the development of life may aid in the search for suitable planets that could develop life forms. By assessing the amount of iron in the mantle of exo-planets, it may now be possible to narrow the search for exo-planets capable of supporting life.