Mating changes female behaviour across a wide range of animals, with these changes induced by components of the male ejaculate, such as sperm and seminal fluid proteins. However, males can vary significantly in their ejaculates, due to factors such as age, mating history, or feeding status. This male variation may therefore lead to variation in the strength of responses males can stimulate in females. 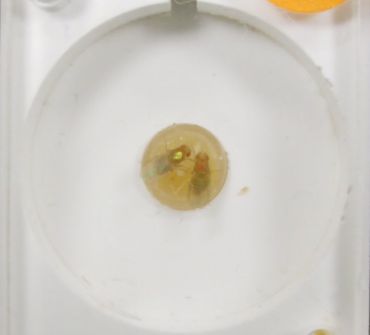 Image 1: Two female fruit flies are standing on a food cap (which contains food that they eat and lay eggs in). This is where the majority of fighting happens – you can see the flies have their legs touching, so they are probably fencing in this image. Each fly is marked with a different colour of paint to aid identification.

Male condition can therefore influence how females interact with each other – who you mate with changes your interactions with members of the same sex!

Image 2: This figure shows the setup we used for contests between females, which consisted of a circular arena with a food cap set into the middle. This food cap contained regular fly food medium, with a drop of yeast paste in the middle to act as a valuable, restricted resource. 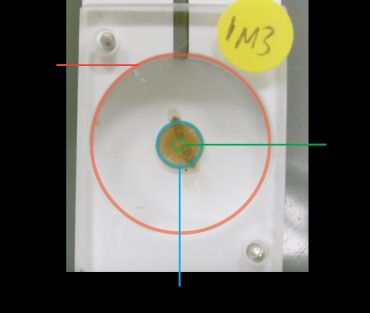 Could this happen in other species?

We know that other species (including humans!) have proteins in the seminal fluid that males transfer to females during sex. Various of these proteins have effects on female physiology and behaviour, but no one knows if these affect aggression (in humans or any other species).

We also know that male age (in flies and humans) results in reduced fertility and can have serious effects on their offspring. Although it is a long leap from flies to humans, could who you mate with influence your interactions with other females?

Many reproductive molecules and important bodily functions are conserved across the animal kingdom from flies to humans, so it is possible that what we found in flies here might be hinting to a common phenomenon across the tree of life. We need more studies to understand if this is the case!