As part of our Women in Science series, ScienceBlog meets Professor Tamsin Mather, a volcanologist in the Department of Earth Sciences at Oxford University. She discusses her professional journey to date, including recent work with the education initiative Votes for Schools, and why science is the best game around.

What is a typical day in the life of a volcanologist like?

Volcanology is incredibly varied, so there is no typical day. Some days I am out in the field, gathering samples from volcanoes and others I’ll be in the lab, giving lectures, or out in the community, encouraging people to take an interest in science.

What has your professional highlight been to date?

There have been lots, but one of the most exciting was finding fixed nitrogen in volcanic plumes in Nicaragua.

All living things need nitrogen to survive. Although Earth’s atmosphere is mainly made up of nitrogen, its atoms are very tightly bonded into molecules, so we can’t use it.  To do so, you need something to trigger their separation. For example, when lightning strikes, the heat prompts atmospheric nitrogen to react with oxygen, forming nitrogen oxides or “fixed nitrogen”. We discovered that above lava lakes, volcanic heat can have the same effect.

Volcanology is incredibly varied. Some days I am out in the field, gathering samples from volcanoes and others I’ll be in the lab, giving lectures, or out in the community, encouraging people to take an interest in science.

Why was the discovery so interesting?

The research shows how volcanoes have played a role in the evolution of the planet and the emergence and development of life.

But that particular trip looms large in my memory because we were robbed while getting the data. I remember it vividly, we had waited all day at the crater edge for the plume to settle, but the sun set before we had a chance to take our measurements. We went back to the national park early the next day, before the security guards arrived, and got robbed at gun point. In retrospect we should have known better, but excitement got the better of us. A terrifying experience but thankfully no one got hurt. We didn’t even get great data that day in the end. 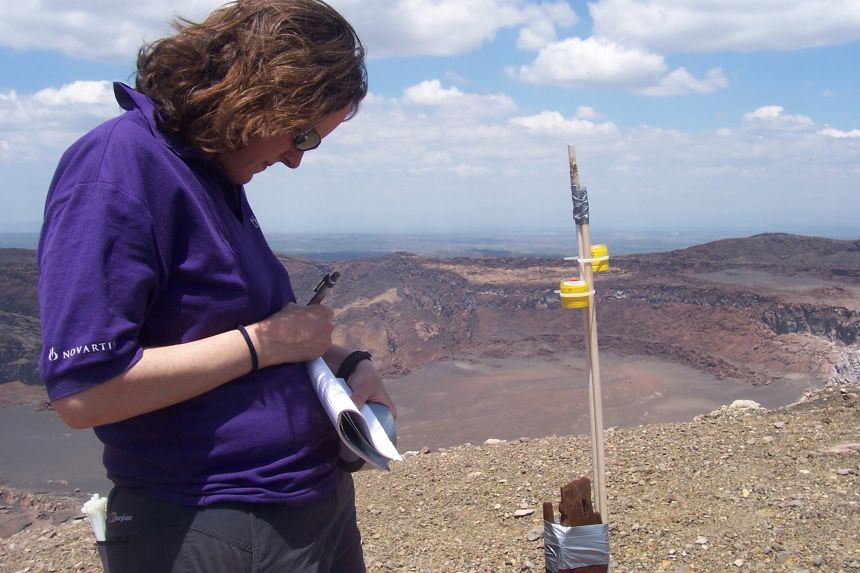 How did you come to specialise in volcanology?

By mistake. When applying for my PhD I put ocean chemistry as my first choice, but I was stumped for my second choice, so browsed the list of topics and the atmospheric chemistry of volcanic plumes stood out to me. I got more and more excited as I read about it, and ended up switching it from my second to first choice. I haven’t looked back.

Do you think being a woman in science holds any particular challenges?

The statistics bear it out - we are still in the minority. There are lots more women in more junior levels now and that will filter through eventually. I definitely would have appreciated more visible female scientist role models when I was younger, but I think the perception of science as a male pursuit is eroding.

For instance, I used to love Space LEGO, but there wasn’t much diversity in the astronaut characters that came with the kits then. Now, my primary school age daughter loves it too, and the kits are much more diverse. I even have the all-female Research Institute kit in my office. The landscape has changed a lot in the last 20 years, but there is still more to be done.

There isn’t just one solution. Whether in relation to gender or ethnic diversity in science, it is a multi-component problem. If someone is the only woman or ethnic minority in their group, they may feel there is no future role for them. There are so many influencing factors in this situation and they are not all easily articulated or solved.

Science is the best game around. You could be building bridges, curing a disease, developing new apps or climbing a volcano – the world is your oyster. I get paid to discover new things about our planet every day, how cool is that?!

What do you think can be done to encourage more diversity in science?

One of the key challenges for women in academia is the transition from PhD student, to post doc level and on to permanent faculty member. Often at that stage scientists have to relocate frequently. Some of my female contemporaries found this difficult and wanted more stability. Maybe they wanted to be close to a partner, or were thinking about having children. That is not an easy problem to solve and it can be difficult for men too.

There are things that can be done to make this journey easier. Programmes that provide flexible working patterns for outstanding scientists, like the Dorothy Hodgkin Fellowship scheme, work well, for instance. 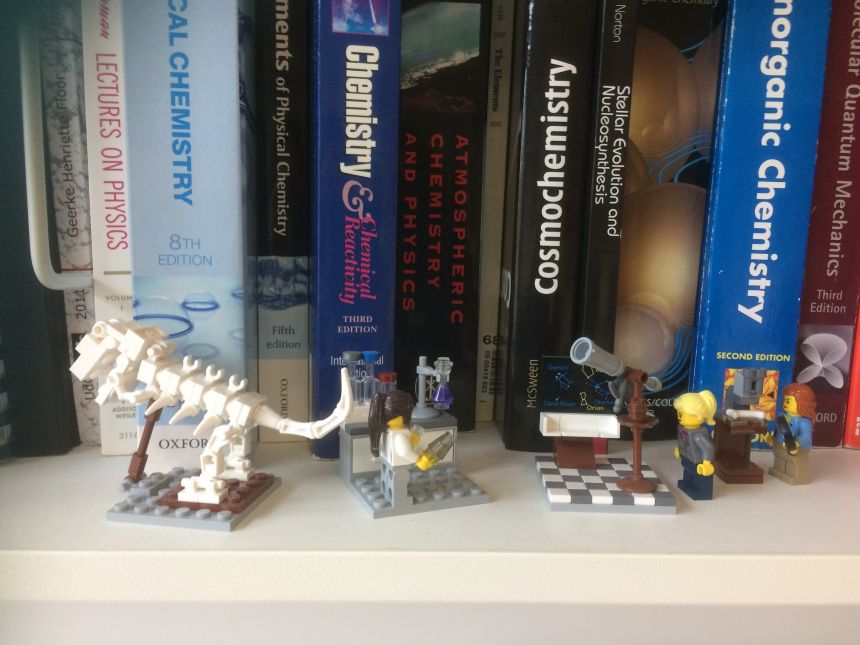 The all-female LEGO Research Institute collection, sits in pride of place on Professor Mather's office bookshelf, as a testament to how far gender bias in science has evolved. Copy Right: Tamsin Mather

We are studying the volcanoes of the Rift Valley in Ethiopia. Little is known about the history of these volcanoes and how often they erupt. But by measuring the layers of ash that have deposited around them, we can learn more about past and present volcanic activity. It’s possible these volcanoes could be used as energy sources in the future and we are investigating their potential for geothermal development.

How did you get started in science?

I always found it fun and really wanted to be an astronaut, but when I was seven I had an ear operation which killed that dream.

How did you come to be involved in Votes for Schools, the education initiative supporting children to have informed opinions?

It’s a great way to get young people thinking critically about the difference between opinions and facts. We have to empower young people and make sure they realise why having a voice matters. It is important to have an informed opinion, no matter your age. I was asked to join the Votes for Schools team, visiting Packmoor Ormiston Academy to talk about being a female scientist and to launch the primary school version of the scheme.

How did the children respond to your question, ‘Do we need more female scientists and engineers?’

The majority (61%) felt that there were not enough female scientists. The statistics of under-representation, arguments about diverse teams performing better, and the importance of engaging the whole of society in science were key here. Those that responded no, felt women have the right to choose what they want to be, a scientist or otherwise. Cultural background came into play as well, with some saying that women should stay at home. 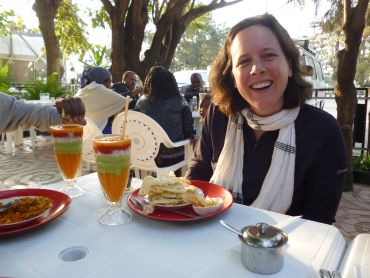 What were your main takeaways from working with the initiative?

Questions like ‘do you ever work on metamorphic as well as igneous rock?’ really surprised me, and the enthusiasm of staff and children alike was fantastic. They really understood the issues and were not afraid to express their opinions. Technology is so central to our lives now, compared to when I was at school. Smart phones and computer games have become key to how we socialise and have fun. Science and technology are certainly not just for geeks anymore!

What advice would you give to someone considering a career in STEM?

Do it! It’s the best game around. There are so many doors that a career in STEM opens for you. You could be building bridges, curing a disease, developing new computer games or apps or climbing a volcano – the world is your oyster. I get paid to discover new things about our planet every day, how cool is that?! 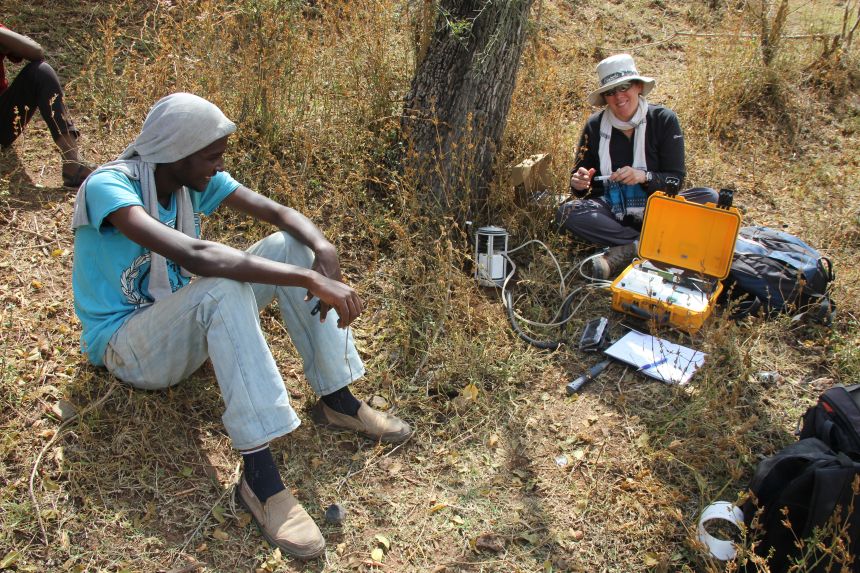