Through the InspireHer initiative, children learn how to programme objects using coding. Games like the robotic ball use methodical, step by step, drag, drop and pause coding, to manipulate its movements. Such skills can be useful in lots of science areas, such as engineering, robotics, website development and computing, as well as business, law and even retail. Image credit: Suzanna Marsh

Although women in science continue to be underrepresented at the highest level, things are slowly changing. In a complex but changing culture, many have built highly successful, rewarding careers, carving out a niche for themselves as a role model to budding scientists, regardless of gender.

In honour of the forthcoming International Women’s Day (March 8th 2017), over the next few weeks, ScienceBlog will be turning the spotlight on some of the diverse and accomplished women of Oxford. Women who, in influencing and changing the world around them with their work, are inspiring a new generation of young people to follow in their footsteps.

Bushra AlAhmadi is a DPhil student in the Department of Computer Science, specialising in cyber security. In 2016 she was awarded the prestigious Google Anita Borg scholarship for women in technology and co-founded the community outreach initiative, InspireHer. The initiative aims to build on young girls’ interest in computer science, by engaging both parent and child with a fun and interactive coding workshop.

How did you come to choose computer science as your field of expertise?

I had a head full of ideas and naturally really enjoyed computer programming; building something from scratch and teaching it to do things. Being able to make something do what you want is both useful and powerful – and that is all coding is. People are just starting to realise that as a skill, it can be useful in lots of areas - not only science areas like engineering, robotics, website development and computing, but also business, law and even retail. It has allowed me to work in multiple fields: programming, security, network security and now cyber security. The freedom of variety to do what you want is really appealing.

What are you currently working on?

My research involves designing malware detection systems, specifically in Software Defined Networks (SDN). Day to day, it involves a lot of coding and testing, trying to find ways to detect and prevent malware. At the moment I am working with external security operation centres' (SOCs) and analysts to understand how they detect malicious activities on the network.

What do you find most challenging about being a woman in science?

As a Saudi Arabian, who completed her master’s degree in California and now lives here in Oxford, I think being a woman in science depends on where you are. Saudi Arabia is actually the place where I feel least aware that I am a 'woman in science'. My university, King Saud University, is divided into single sex campuses, and we actually have an equal number of female and male students studying computer science, if not more. There are around 1,000 female computing undergraduates as well as Master's and PhD students, so we don’t see ourselves as female scientists, just scientists. But, both in the USA and UK, I was always aware of being a minority in my field. Often you are the only woman in your study group.

We need more women and ethnic minorities working in tech, so don’t be afraid to apply just because you are different. In my case it has only been an asset.

In the early stages of my pregnancy, I didn’t want people to think I was less capable of doing my work, so didn’t tell anyone at first and became quite isolated and homesick. But, when I did tell my tutors, the support I got from the university was great, and made me wish I had done so sooner. Everyone from my supervisors to the administrators, went out of their way to make me feel comfortable. Female professors are still a minority at Oxford, but they openly talk about their experiences as women. It’s so important to have relatable role models who talk about motherhood, rather than hiding it away like it is wrong, or that in doing so they are making excuses.

When I attended my first seminar after having my son, I was really nervous. My professor pulled me aside and said: 'if you need to bring your child to a lecture or a meeting, just do it – I have.' It instantly put me at ease and made me realise, it didn’t matter. She was a mum too, like lots of other female scientists. They do not let it hold them back, so I never have either. As a woman and an international student, you feel very welcome and safe here. With everything happening in the world at the moment, I feel very lucky to be here. 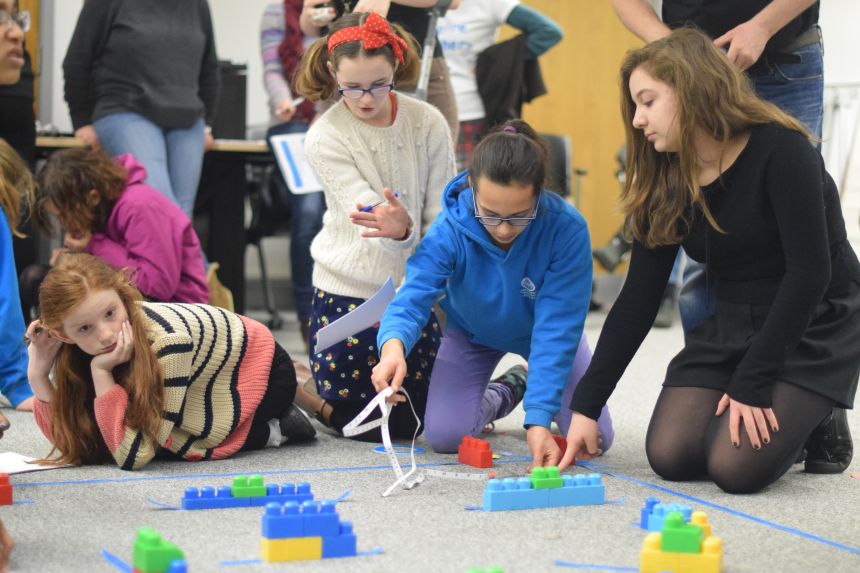 The family focused initiative supports children and their parents to learn more about coding.

What accomplishments are you most proud of to date?

Winning a place on the Google Women Techmakers Scholars Programme, which was formerly known as the Anita Borg Memorial Scholarship Programme (offering financial support to people studying computer science at under graduate or graduate level) was a great honour. On a personal level, doing a PhD while pregnant and having my son in my first year of study is something I am very proud of.

What led you to set up InspireHer?

Female professors are still a minority at Oxford, but they openly talk about their experiences as women. It’s so important to have relatable role models who talk about motherhood, rather than hiding it away like it is wrong, or that in doing so they are making excuse.

As part of my scholarship we were asked to come up with outreach ideas and as a mum, I wanted to engage parents as well, so that they can support and encourage their child’s interest in computer science.

InspireHer is a programme for young girls, who with their parents can become inspired through coding. Through the programme, I often meet parents who think that exposure to technology is bad for their child's development. There are lots of computer and smart tech games that can help children with their maths and science skills development.

Programmes like SCRATCH encourage children to create their own stories, animations and videos.

What can be done to encourage more young girls to choose a career in STEM?

Research suggests that if we want to see more women working in the STEM sciences, we have to engage them at an early age. Having a parent to help and guide them helps feed a child’s interest and boost their confidence. If parents do not understand or value computer science, then their children are not likely to either.

Strong, encouraging role models are really important, especially for younger children (under five) who would not know where to look for coding activities on their own. I am very proud to be a woman in science. There are some great female computer scientists, but to stay that way, we need a new generation to follow suit and a generation after that and after that. Workshops like InspireHer allow young girls to build on their interest in computing, practice activities and then decide for themselves if it is the right career for them. 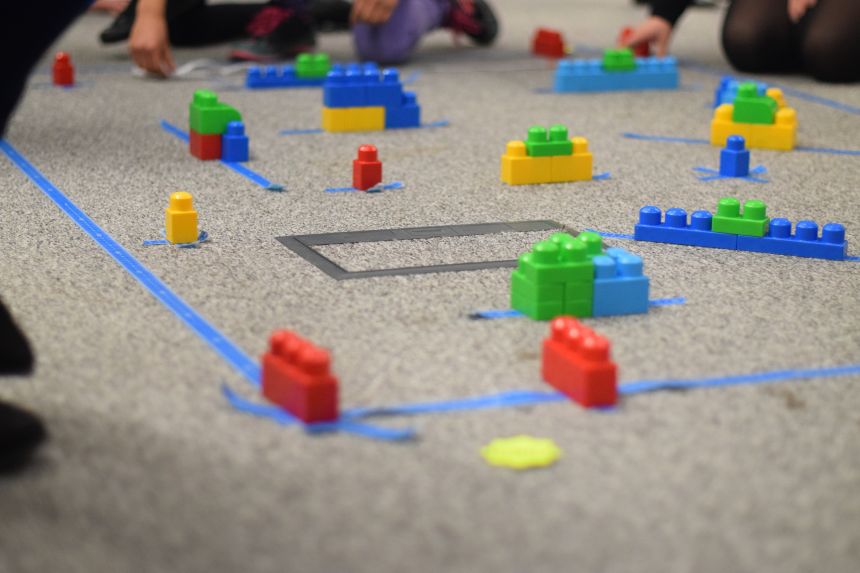 Through the InspireHer programme young girls and their parents gain the skill of coding. The exercises used are methodical and build a step by step approach to problem solving, in much the same way as LEGO and building blocks.

How can schools better support children interested in science?

Some of the girls attending InspireHer events say they love science, but find school boring. Coding is an interactive and fun way to learn as it is multi-disciplinary and a good skill to develop, whatever field you decide to go into. Teachers could use the robotic ball exercise to make maths and science lessons more hands on. We use it a lot at InspireHer events and the children respond well to it. They learn to code and control the ball, coordinating its movements by using drag, drop and pause options. The game encourages the same step by step approach and problem-solving skills as playing with LEGO or building blocks.

What are your goals for the future?

I am participating in the first Saudi Arabian Cyber Security Contest, which in light of the recent cyber-attacks on Saudi Arabia, is a big deal in my country. Twenty finalists were chosen out of 500 entrants.

When I complete my scholarship in 2018, I will return to Saudi Arabia and teach coding to undergraduates. I am also preparing to launch my own cyber security consultancy business, which I hope will support government and private organisations to develop and build their cyber security capabilities.

What advice would you give to anyone considering a career in computer science?

Believe in yourself and you can make a great impact in any field, especially tech and computing. Don’t be afraid to take the lead, firsts only happen because someone makes them happen.  When I started at King Saud University, the only student society was for male law students, (there was nothing for women). I started the first IT Society for Women, organising coding workshops and tech talks.  I’ve also been involved with Oxford Women in Computer Science since I arrived at the University in 2014, and was President of the group from 2015 - 2016. We organised the second Oxbridge women in computer science conference, bringing together female researchers from Oxford and Cambridge. Of all the sciences, computing really benefits from and needs diversity. We need more women and ethnic minorities working in tech, so don’t be afraid to apply just because you are different. In my case it has only been an asset.

Computer science background information and practical resources are available from the University of Oxford Department of Computer Science website.

For further information on coding initiatives for children visit Code First Girls, or check out Go Girl coding , which is also an Oxford University initiative.

SCRATCH is a coding platform for young people that allows children to create their own stories, animations and videos.