Dr Dhopade works in partnership with Rolls-Royce plc, working to understand the aerodynamics of jet engines and to control the temperature inside the engine. Credit: Oxford University

Many female scientists now have inspiring stories to tell, but all the science disciplines still need to make progress on gender equality. With the lowest percentage of female professionals of all the STEM areas (9% in UK universities), engineering is one of the most  scrutinised specialisms.

As a Canadian woman of South Asian heritage, Dr Priyanka Dhopade, Senior Research Associate at Oxford University’s Osney Thermo-Fluid Laboratory, is breaking down barriers in more ways than one. She talked to Scienceblog about her journey so far and how she is using her own experience coming from a minority background to create a brighter future for female engineers to come.

What does your work involve?

Most of my work is in partnership with Rolls-Royce plc, and focuses on the aerodynamics of jet engines, specifically controlling the temperature inside the engine. Jet engines are designed to operate at extremely high temperatures and pressures to be efficient. This means that some parts of the engine are exposed to temperatures higher than the melting points of those parts. This requires some creative cooling methods e.g. internally cooling the turbine blades using a complicated network of passages. My research focuses on finding the novel cooling methods, preventing overheating but at the same time not making it too cool that you decrease its thrust or efficiency. 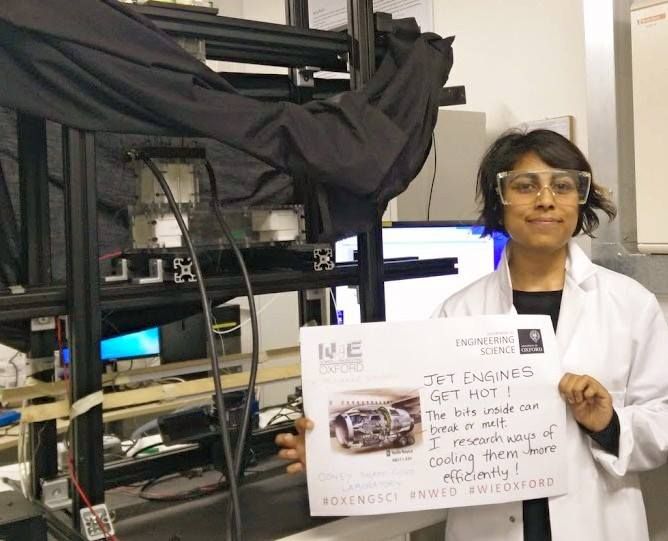 What is your take on diversity in general at Oxford?

I think Oxford has come a long way, but there is still more to be done. It’s a diverse and inclusive environment for research and collaboration and I work with people from various ethnicities on a daily basis. However, given the historical context, I do recognise that there is still this perception that Oxford isn't open to everyone. It can be difficult to change these perceptions and it takes time.

The Diversifying Oxford Portraits initiative is a great example of a tangible change that can help. Outreach programs targeting BME groups and communities that are outside the "Oxbridge" network can also help. The University can only benefit from diversity in all forms - ethnicity, class, gender, disability and sexual orientation. Given the current political climate, I think it's important for educational institutions, especially those as prestigious as Oxford, to set an example of an open, diverse and inclusive community.

The University can only benefit from diversity in all forms - ethnicity, class, gender, disability and sexual orientation. Given the current political climate, I think it's important for educational institutions, especially those as prestigious as Oxford, to set an example of an open, diverse and inclusive community.

What has it been like being a woman studying, working and now teaching engineering?

I have studied and worked in engineering in Canada, Australia and the UK, and the experience has been fairly similar, I have always been in a minority in my industry. After a while that gets hard to ignore. I don’t think it is so much a reflection on the universities themselves, but more to do with the level of my position within them. As my career has progressed, it has become more and more noticeable that I am in a minority in my field. 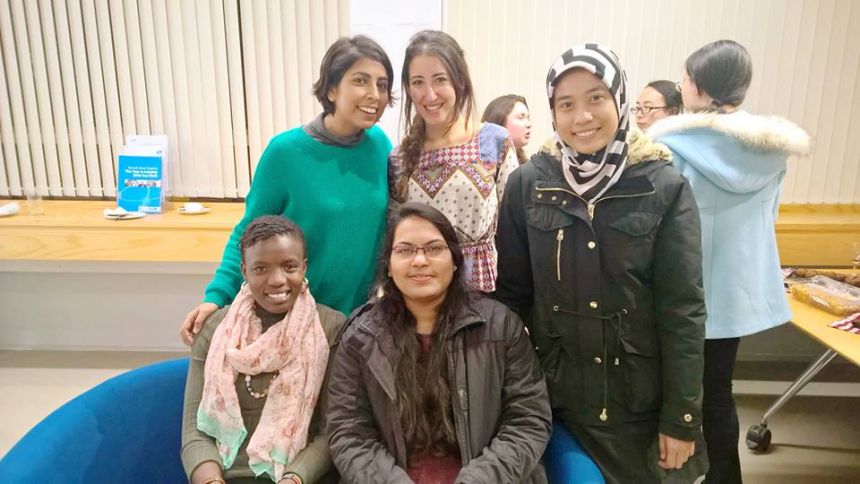 Dr Priyanka Dhopade coordinates the Women in Engineering at Oxford group, which organises talks, social events and other networking activities for women in the field. Credit: Dr Dhopade

How has it become more noticeable?

As an undergraduate in Canada, I never felt or experienced discrimination. If anything, it was a very positive time for me. I worked hard to really understand the material, and helped other students along the way. When studying for my PHD I was one of the only females in the research group and now as a senior researcher I am the only female - in a group of eighty personnel. Numbers like that are hard to ignore, and you become more aware and frustrated by these issues.

I coordinate the Women in Engineering Oxford group and think I am more of a feminist and an advocate for women in STEM now, than I ever was before, because of my own journey. After a while you just start to think ‘this is not right, I should not be the only woman here.’

Do the women in the group have similar experiences?

There is real camaraderie between the women in my field, which is something I never expected. We are all tied by a common bond, and so understand the issues and support each other. I have made so many female friends across STEM and other PHD areas because of what I do, probably more than I have ever had. It's been great to watch the Women in Engineering at Oxford group, initially created to support the Athena SWAN initiative, grow over the last few years, as more women have joined the research team. Though we still have some work to do to help them progress to high level positions. 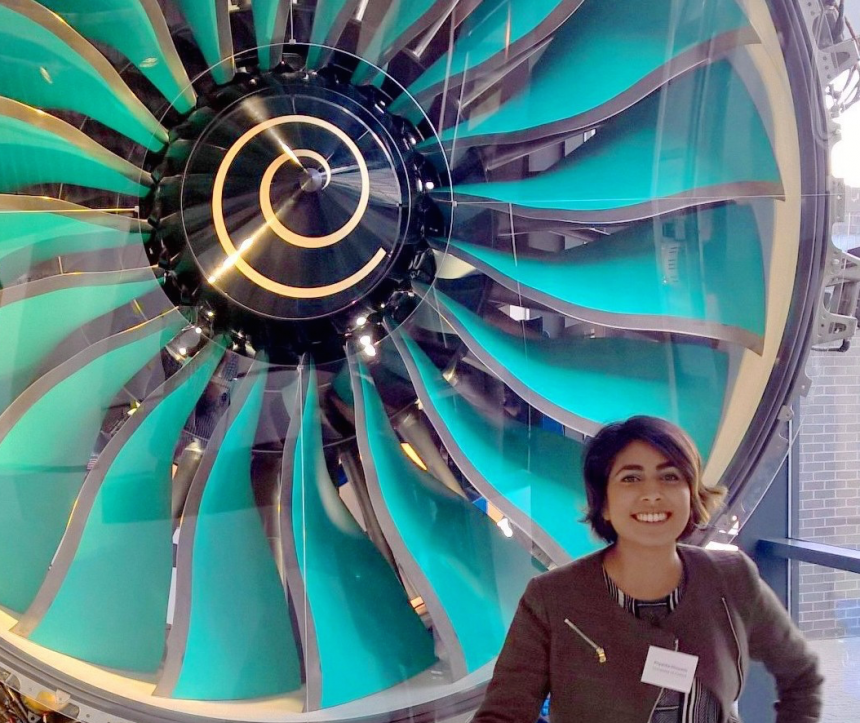 Dr Priyanka Dhopade is an aerodynamics engineer, who works in collaboration with manufacturers like Rolls-Royce plc. Her research focuses on finding cooling methods for jet engines that strike a balance between preventing overheating and not making it so cool, that it impacts thrust and efficiency. Credit: Dr Priyanka Dhopade

How do you think these issues and the general imbalance of women working in engineering can be addressed?

It has to be tackled collaboratively by employers and on a policy level. Maternity leave policies are set by the government but have a major impact on how employers view family responsibilities. I know women who have been asked in interviews, directly, if they plan to have children, and if they answer yes, they are seen as not being serious about their careers. I feel that the government sets the tone, and needs to make parental leave a shared responsibility, (as it is in Scandinavia for example). If both men and women had the option of appropriate parental leave it would be seen more as a natural progression of life for those that choose to do so, not just something that women want. I think things are moving in the right direction, but it is a long process.

Unconscious bias is a big issue that does not get much attention. It is difficult to get people to challenge and face up to their own implicit biases, everyone has them, but are rarely willing to admit to them. There is already some great training underway, like the Royal Academy of Engineering and Royal Society of Science, who are rolling out unconscious bias recruitment programmes. But more is needed to encourage panellists to be open minded, particularly at higher levels of academia.

Unconscious bias is a big issue that does not get much attention. It is difficult to get people to challenge and face up to their own implicit biases, everyone has them, but are rarely willing to admit to them.

Speaking to senior academics at Oxford, I know that the University wants to hire more women, but they just aren’t getting the applications. I’m not entirely sure why that is, but I think confidence has a lot to do with it. Having been in their shoes, without my PHD supervisor recommending me I probably wouldn’t have applied myself. There are not many women in top tier engineering research positions and for that to change there has to be some degree of head hunting for female scientists as well.

How would you describe your experience of Oxford?

I’ve been at Oxford for four, very positive years. We work closely with partner organisations, which means I get to have direct impact on Rolls-Royce plc next generation technology, which is so rewarding. 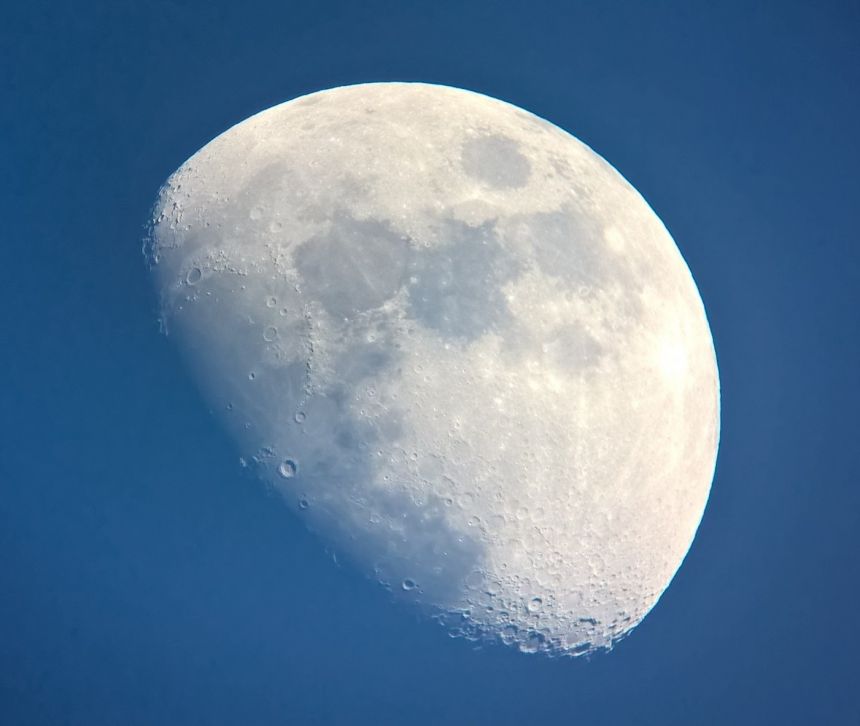 Dr Dhopade has a passion for astronomy, and in her spare time takes in some spectacular views of the moon, with her telescope from her balcony.

What is the biggest challenge in your job?

The biggest challenge is also the biggest blessing; working directly with sponsors. Large external organisations work to their own deadlines, so we have to adapt our working styles and be more flexible.

Where do you see yourself in 10 years?

In academia, continuing my research career at Oxford hopefully. My work has the potential to significantly reduce the environmental impact of civil aviation, which, as air passenger travel continues to rise, is critical. More efficient engines consume less fuel and emit less greenhouse gases.  I also want to get more involved in conveying the importance of engineering research to the general public.

Did you always want to be an engineer?

Growing up in a South Asian family, the cultural connotations of a career in science were very positive and encouraged, which I think isn’t always the case in the West. STEM fields were seen as stable, financially rewarding professions for boys and girls. My Dad is an engineer too, so I am lucky to have supportive parents who understand the field.

One of my earliest role models was Roberta Bondar, the first Canadian woman in space, and I had a signed poster of her on my wall growing up. Every time I looked at it, I’d get inspired and think; ‘if she can do it, so can I!’ Female role models play such an important role in a young girl’s life.

Engineering is mentally taxing, how do you like to unwind?
I love travelling and also have a telescope that I am always looking for an opportunity to use (even though Britain's climate is largely uncooperative in this aspect!) and so far, I've seen some spectacular views of the moon and sun from my balcony.

What is your favourite thing about your job?

Working with so many smart people is so inspiring. I feel like I am getting smarter everyday just from being around them. 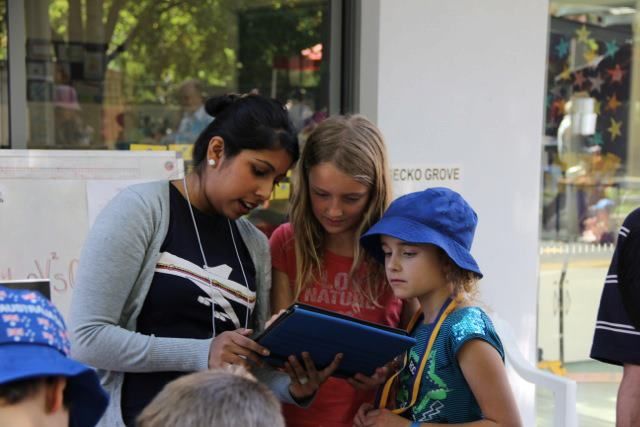 Dr Dhopade is a an advocate for STEM, and involved in community outreach, conveying the importance of engineering research to the general public.
Why didn't I 'discover' the Blenheim sarcophagus?
The seminar series exploring violence