Professor Yadvinder Malhi in his element: 'Restoring the rainforest and nature can’t solve climate change, but it can make a substantial and real contribution, while bringing all the many other benefits of a thriving natural world.'

Rainforests are amazing places - great biodiverse ecosystems and carbon sinks. But, as a million nature programmes have shown, they are also full of things that could kill you: insects as big as your fist, some of the deadliest snakes alive, even the frogs can be nasty. Not unreasonably, this might well deter many people from venturing into these great forests – but not Oxford professor Yadvinder Malhi. He admits, he likes that sort of thing...a lot. It is not just the biodiversity which attracts the professor of Ecosystem Science, but the challenging nature of doing research there, the fact we still know so little about them and the major role rainforests have to play in our climate.

A million nature programmes have shown, rainforests are full of things that could kill you...Not unreasonably, this might well deter many people from venturing into these great forests – but not Oxford professor Yadvinder Malhi. He admits, he likes that sort of thing...a lot

Until the pandemic, Professor Malhi had spent years in and around tropical rainforests, visiting field research sites most years. He took his young family on holiday to one dense forest deep in Borneo and only went to the beach, reluctantly, after his son protested at the idea of even more time in the rainforest. This year, though, he has been a stay-at-home academic, with the most challenging environment being Oxford and the University’s Wytham Woods (actually a very interesting place to study, says the professor).

It is a far cry from where the genial professor grew up: darkest Essex. Although, when he was around six, the young Yadvinder’s parents sent him to live with his grandparents in the Punjab for a year – so he would understand his Indian roots. Life could not have been more different (and more challenging), but Yadvinder discovered an intense life in full colour surrounded by warm, welcoming people – and his love affair with tough places and nature began.

‘I saw the world open up for me,’ he says. ‘It made me want to explore the whole world.’

He recalls how his cousins would bring him local birds and animals to inspect, catching parrots in basket traps, so the budding young scientist could inspect them. After a year, he returned to monochrome Essex, more interested than ever in the scientific world, and told his incredulous classmates about one discovery, ‘There are more brown people in the world than white.’

'They did not believe me,' he laughs.  Yadvinder's keen interest and scientific ability, took him from his local school to Cambridge in the late 1980s, to study Physics.

‘I wanted to study astronomy,’ he says. Awareness of the issue of climate change was in its infancy, but he was beginning to think that maybe environmental science, rather than the stars, was for him.

‘There is a tradition of physicists going into biology,’ he adds. ‘I’ve learned a lot in the process.’

Going to Edinburgh after his doctorate, the young researcher took his first big step into the natural world, with a study visit to Brazil. He learnt Portuguese (though his samba didn’t improve much) while waiting for his equipment to clear customs (it took three months). But the main point was to work in the rainforest.

‘We worked on a scaffolding tower in the middle of the Amazon,’ he says, reminiscing fondly. ‘We measured the rain, air and water....this was the first time I had been in a rainforest. I loved it all, the bugs, the big skies, the multitude of living things, everything.’

He adds, ‘There was rainforest for a 1,000 miles in every direction. It’s a continent-sized forest. To see such vast nature and to feel so small - it was transformative.’

There was rainforest for a 1,000 miles in every direction [on his first trip to the Amazon]. It’s a continent-sized forest. To see such vast nature and to feel so small - it was transformative

Perhaps with memories of his days as a boy naturalist, he says, ‘There was so much to learn. I was more and more fascinated by ecology.’

He was eager to learn more about ecology – while bringing his physicist’s mindset to the research. Professor Malhi worked largely in Brazil until the early 2000s, when he was invited to look at the potential to do research Peru. He loved that too, ‘I looked at the Andes, it was fantastic. We spent a few weeks, trekking ancient Inca trails.’

On the slopes of the Andes, working with local and international partners, he helped establish a ‘vertical science laboratory’, stretching from the steaming lowland rainforest to the high treeline of the cloud forest, four km up in the atmosphere. 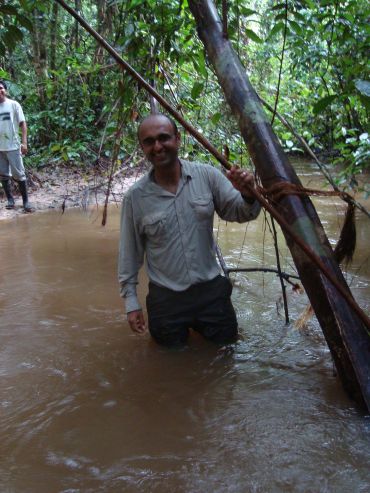 Full of things that could kill you: Yadvinder smiles at the memory of days in the rainforest.

He beams as he remembers with evident happy memories, ‘We put study sites all up the sides of the mountains to understand how climate affected tropical forests, and moved plants and soils up and down the mountains [to look at the environment at different levels].’

The same method has now been adopted in other forests from Brazil to Borneo.

‘I was trying to look at the forest as a physicist would, as a system,’ he says.

In 2004, he arrived in Oxford, with a Royal Society fellowship. His work could continue, but he was based, for part of the year anyway, in the city of dreaming spires. Cycling home one rainy Michaelmas day after an intense few weeks of teaching, he missed the outdoors, the forest, the sun. On arriving home, he discovered his wife had been offered an overseas posting – Ghana. He did not need to be asked twice.

Cycling home one rainy Michaelmas day...[in Oxford] he missed the outdoors, the forest, the sun. On arriving home, he discovered his wife had been offered an overseas posting – Ghana. He did not need to be asked twice

‘We went to Ghana for three years,’ he says. ‘I was a stay-at-home father for much of the time, but I used it as a chance to get to understand the forests and people of this continent that was so new to me.’

He adds, enthusiastically, ‘Africa has an unjustified reputation to be really difficult to work in, but once you know people and build local friendships, it can be great and immensely rewarding. I have developed some wonderful long term friendships and working relationships there, and now over half my work is in Africa’

Since the creation of the vertical lab in the Andes, a key part of Professor Malhi’s work has been researching, with partners on the ground, the metabolism of the forest. It is critical work – finding out what is in the rainforest and what is happening – and it is varied from country to country and even within the same forest.

‘We were doing our own research but we realised a global understanding of rainforests was needed, which is where the Global Ecosystems Network (GEM) came in,’ he says.

‘We can see how events, such as El Niño, can lead to carbon pouring into the atmosphere [as the rainforest turns from carbon sink to carbon producer]...half of our plots [study sites] in a key part of the Amazon caught fire and we have been tracking them to see how they recover. These long-term ecological observations are  like an ecological weather station, giving us insights into how the forests were and early warning of how they might be changing.’

We can see how events, such as El Niño, can lead to carbon pouring into the atmosphere [as the rainforest turns from carbon sink to carbon producer]...These long-term ecological observations are like an ecological weather station, giving us insights into how the forests might be changing

His scientific interest is clearly to the fore as Professor Malhi talks about major weather events, which are becoming more common, potentially having the capacity to turn a massive carbon sink into a carbon producer. The consequences for climate change would be severe. He maintains nature and the rainforest will play a huge role in the battle against climate change, ‘Restoring the rainforest and nature can’t solve climate change, but it can make a substantial and real contribution, while bringing all the many other benefits of a thriving natural world.’

Talking about the new Oxford Martin School Programme in Biodiversity and Society, his particular focus is on better connecting the university to nature restoration projects and plans recovery in the surrounding landscapes of Oxfordshire.

‘We need to do something here locally...the UK’s biodiversity is in a poor state and there’s a lot of potential and new political will to make things better. The experience of lockdown really brought home the importance of local nature. Biodiversity is no longer just thought of as something just nice to have – it’s seen as essential, bringing lots of benefits such as human health and wellbeing, flood control and air quality.’

Restoring the rainforest and nature can’t solve climate change, but it can make a substantial and real contribution, while bringing all the many other benefits of a thriving natural world

Professor Malhi is hopeful about the future of the natural world, ‘This is an exciting time. We’re going to see serious efforts to maintain and restore biodiversity...there’s a very positive agenda. It’s no longer about just stopping bad things happening, but about making good things happen.’

And his enthusiasm for research and hard-to-reach places is evident, ‘It’s amazing what you can learn from the countries we work in, from the people who live and work there every day, and from the amazing variety of tropical nature.’

As for him, the Essex boy cannot wait for the pandemic to be over, so that he can head back to where the wild things are, for the sake of science, ‘As a scientist, it’s really important to have a passion, a passion for finding things out – that’s much more important than revising for exams.’

Exhibition and installation: coming to meat you
One million orphans, so far: the hidden COVID crisis we need to talk about much more