The concentration of CO2 in the atmosphere at the last ice age, some 19,000 years ago, was about a third lower than just prior to the Industrial Revolution. Where this carbon was stored during that frozen time is a mystery scientists have long sought to solve.

Most explanations for this “missing” CO2 – equivalent to about 200 billion tons of carbon or 20 years’ worth of anthropogenic emissions – have focused on the ocean. The reason is that, owing to some rather peculiar chemistry, CO2 is highly soluble in seawater. Consequently, the ocean contains roughly 60 times more CO2 than the atmosphere. 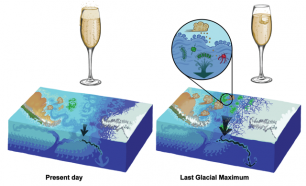 Illustration of the two main mechanisms identified by this study to explain lower atmospheric CO2 during glacial periods. Left: present-day conditions; right: conditions around 19,000 years ago during the Last Glacial Maximum.

In the way that a chilled glass of sparkling wine will remain fizzier for longer than a warm one (solubility increases with decreasing temperature), more CO2 must have been dissolved in the ocean during the last ice age when the ocean was on average 2.5ºC cooler. But previous studies, which essentially treated the ocean as a large tub of fizzy wine, have concluded that this mechanism can only explain about a quarter of the CO2 change. So what else is going on?

Well, we know that the ocean is (sadly!) not like a glass of Prosecco. Currents at the surface move water from the tropics to high latitudes. Along the way the water absorbs CO2 from the atmosphere as it cools, until it become dense enough to sink into the deep, taking dissolved carbon with it. This process is called the “solubility pump” since it is akin to “pumping” carbon down from the surface into the interior.

The pump doesn’t operate at full capacity, though, as the rate of absorption is quite slow and when the water sinks it actually contains much less CO2 than it is theoretically capable of absorbing from the atmosphere.

The more the water has to cool during its poleward journey, the greater the deficit. Reconstructions of sea surface temperature suggest that this gradient was smaller during the last ice age, with more cooling at mid-latitudes and less in polar regions, where the water is already close to freezing.

This led us to hypothesize that earlier studies, which had not only neglected this “disequilibrium” effect but also assumed that the ocean cooled uniformly, may have underestimated the effect of temperature.

To test this idea we developed a novel computer model which both accounts for disequilibrium and reproduces the reconstructed, non-uniform pattern of sea surface temperature change. Sure enough, the model predicts almost double the CO2 absorption as previous estimates and suggests that temperature can explain as much as half the glacial-interglacial atmospheric CO2 change.

In addition, ocean biology also plays a critical role in carbon storage. Like plants on land, marine algae absorb CO2 from the atmosphere during photosynthesis. When they die they sink into the deep ocean where bacteria feed on them to respire CO2 that then dissolves into the seawater. This “biological pump” doesn’t operate at full capacity either, as in large parts of the ocean algae are starved of iron (think of Popeye without his spinach!), an essential micronutrient supplied primarily by wind-borne dust.

As glacial periods were likely windier and dustier, more iron may have been supplied during those times, “fertilizing” algal growth and drawing down atmospheric CO2. But earlier studies had concluded that this could only account for about a tenth of the full CO2 change. Our new simulations informed by recent data on glacial dust fluxes can, on the other hand, explain a much more hefty quarter of the “missing” CO2.

If it’s true that these processes which were previously considered insignificant, are the biggest drivers of glacial-interglacial CO2 change, it’s perhaps even more surprising that the two processes widely believed to be the most important turn out to be minor players.

The current consensus is that a slowdown in the “overturning” circulation in the Atlantic and massive expansion of sea ice off Antarctica were the likely drivers of the CO2 change. However, our simulations show that if anything, both of these make the biological pump less efficient during glacial periods and thus increase atmospheric CO2!

Exciting as these new results are, their real significance lies in illuminating and untangling the complex interactions and feedbacks between the various processes that make up the ocean carbon cycle. Plenty more research will be needed before the final word on the cause of ice ages is written!