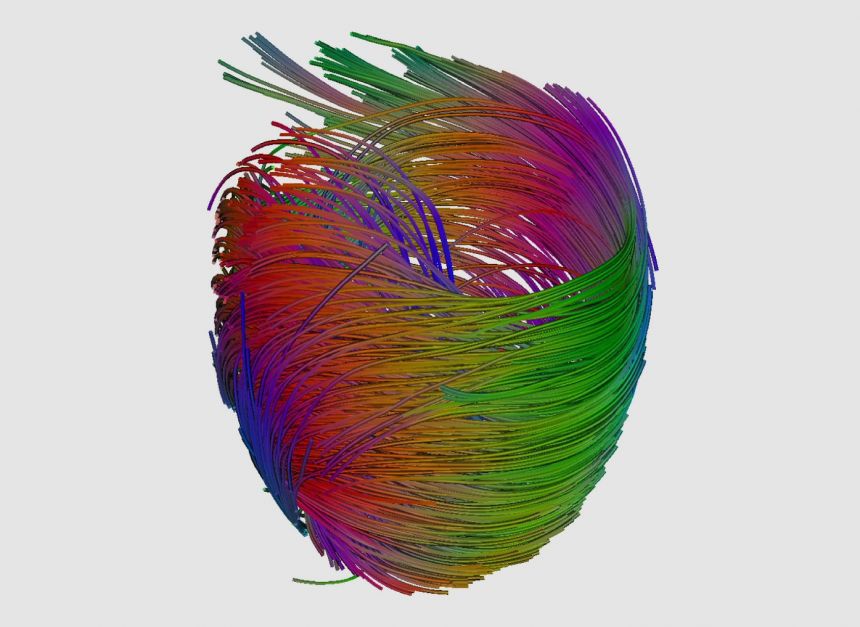 If you thought 'tugging at your heartstrings' was just an expression, think again.

In a tale appropriate to the cardiac-thumping run up to Valentine's Day an Oxford University researcher has produced an image showing the orientation of 'strings', or more scientifically-speaking 'muscle fibres', within the human heart.

The image above by Patrick Hales, from Oxford University's Wellcome Trust Centre for Human Genetics [WTCHG], won the runner up prize in the British Heart Foundation's Reflections of Research competition.

It was generated from an MRI scan of a heart, using Diffusion Tensor Imaging. The scan tracks the movement of water molecules throughout the heart muscle, which reveals how the muscle cells are aligned. The lines represent the orientation of muscle fibres in the heart’s biggest chamber, the left ventricle.

'This technology allows us to model the structure of muscles in the heart in a non-invasive way, and how diseases can cause it to change,' Patrick told us.

'In the future, we hope that our research might be able to determine how the structure of the heart is damaged during a heart attack, and how the muscle fibres respond.'

'We also hope that our computer models of individual hearts will one day be used as a tool for diagnosis, and could even provide patient-specific assessment of treatment options. Imagine your doctor trying out treatments on a ‘virtual’ version of you, before choosing the right prescription.'

The image was produced as part of a collaborative research project between researchers at medical, basic science, and computing departments at Oxford University, funded jointly by the BHF and the BBSRC.

Also deserving a special mention is the image 'The tree of life' (below) by Patrizia Camelliti of Oxford's DPAG that made the competition's shortlist.

It shows the orientation of cells deep within the heart, visualised using multiphoton fluorescence microscopy. The cells have been stained with special pigment molecules which absorb the light from a laser and emit light of a different wavelength.

According to Patrizia: 'The muscle cells of the heart intertwine like the branches of a great banyan tree. This intricate structure is essential for generating force to pump blood around the body.'

'My research aims to reveal the complex structural and functional alterations affecting the heart during heart failure, and how people with this condition can be helped by implanted devices that help the heart to pump.'

'The results will help engineers improve the design of these devices, with direct benefits for the thousands of people awaiting a heart transplant.'

What to do with CO2
Movie or hi-res photo? Take both