One in seven people worldwide - that’s over a billion, do not have access to clean drinking water. From rainfall to seawater and human wastewater, to have enough fresh water in the future, we have to recycle it now. Image credit: Shutterstock

From drought concerns to political debate and international awareness activity, H₂O has become big news, with good reason. As quickly as the world’s population is rising, international water reserves are diminishing. Despite making up over 70% of the earth’s surface, the bulk of our water reserves are either oceans (97%), or locked up in ice (98% of fresh water supplies), and therefore undrinkable. These changing circumstances have left one in seven people worldwide - that’s over a billion - without access to clean drinking water.

Although near to the sea, countries in the Arabian Peninsula do not have access to rainfall or natural ground water resources and a water crisis is looming. Professor Nick Hankins, Associate Professor of Chemical Engineering at Oxford’s Department of Engineering Science talks to Science Blog, about his new research partnership with the University of Bahrain, developing cost-effective water treatment and desalination solutions. 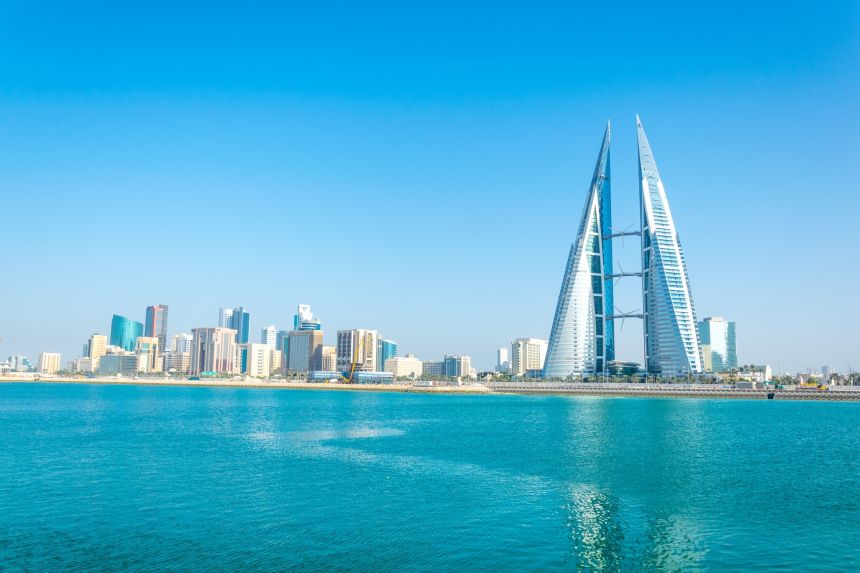 Although near to the sea, countries in the Arabian Peninsula do not have access to rainfall or natural ground water resources and a water crisis is looming. A new Oxford University collaboration will focus on developing solutions to producing water cost-effectively and sustainably in the future. Image credit: Shutterstock

What is sustainable water engineering?

I call my laboratory, the laboratory of sustainable water engineering, I think it explains the work better than chemical engineering.  It is a way of thinking about a resource in terms of how we use it, store it, consume it, and recycle it, all of which are incredibly important in water treatment. Future research into sustainability is key to the future of our planet.

It’s often said that water is the new gold. Some dispute it, but the reality is there is a lot of water on this planet, and only a tiny amount of fresh surface water available. My research focuses on developing four key water treatment solutions: the supply of clean, potable drinking water e.g. low energy desalination of seawater, wastewater treatment, water reuse, and finally industrial process water treatment and recycling.

Sustainable water engineering is a way of thinking about a resource in terms of how we use it, store it, consume it, and recycle it. Future research into sustainability is key to the future of our planet.

To have enough fresh water we have to recycle it. It rains, it pours and then we recycle it. Sea water is a largely untapped resource that we need to utilise, but the current costs are just not sustainable.

Can you describe desalination?

Desalination is the process of removing all of the salt in seawater. Seawater also contains marine organisms, silt and other materials that reduce the purity of the water. These have to be stripped out to make it drinkable and/or useful to agriculture. It is a lot more expensive than treating rainfall or even wastewater, so any savings that you can make will make a big difference. It is particularly useful in countries that are near to the sea but do not have their own natural water resources, like Bahrain, Saudi Arabia and the Gulf region in general.

Does your research centre use any specific techniques?

Mining into the world’s seawater resource is key to future water sustainability. Thermal desalination was often used in this area, but the costs are just not sustainable. My research centre specialises in developing cost-effective, lower-energy intensive water treatment techniques.

Reverse osmosis is a popular water purification technology that uses a semipermeable membrane to remove ions, molecules, and larger particles from water under pressure. But I’ve been working on a technique called forward osmosis, which uses less energy. It uses the same principle, only the other way around. A ‘draw’ solution pulls out the water while the salt is trapped by a membrane. The draw agents - magnetic particles or large molecules - are then filtered out from the draw solution or removed by changing the temperature of the water. This allows drinkable water to be extracted, without the need to remove gunk or worry about fouling. It uses less energy and in the long term it could be a good solution to pre-treating the seawater.

The only way forward is to use renewable energy, or to find new ways of reducing the energy costs of treatment processes. Which is exactly the purpose of my research.

How is water treatment useful?

Water treatment has grown in international importance, particularly in the Gulf region. Now that oil resources are running out they are having to diversify economically, and find new ways to save money and conserve energy.  As a result there is a lot of government interest in renewable energy, which is energy that is made from natural resources, like solar power, wind turbines and hydropower. Each area has its own challenges, but desalination is one of the most intensive uses for renewable energy.

How did the collaboration with the University of Bahrain (UoB) come about?

The University of Bahrain is in the process of setting up a centre for sustainability, which will focus on renewable energy research.

We recently entered into a four-year partnership with the UoB, which will support the centre to develop sustainable water resources. Our initial research collaboration will investigate ways to reduce the energy consumption associated with the pre-treatment of sea water, which is a necessary but energy-hungry first stage in desalination.

What are the overall project’s aims?

Developing solutions to producing water cost-effectively and sustainably in the future. Work might include irrigating the desert to see if you can grow crops there, or developing ‘seawater greenhouses’ in which desalination is combined with growing crops.

It’s a great opportunity for Oxford that also represents a progressive step forward for Bahrain politically. The country has strong historical links with the UK. They are keen to strengthen international links and work with academic centres of excellence like Oxford.

The clue is in the name, wastewater. We would be crazy not to recycle it. It is already happening in Singapore, where they drink recycled human wastewater. That is where the future is. We are going to have to start looking at our waste differently eventually, so why not now?

What interests you most about the project?

I am thrilled to be involved in an international collaboration where I think there will be a strong and immediate impact. It is also a very exciting opportunity for shared knowledge transfer, supporting a particular and very serious problem. Our findings can be applied straight away in Bahrain and will instantly make a difference to people’s lives.

When will work commence?

We are already up and running. A signing ceremony was held earlier this week at the UoB and attended by a number of state officials including the British Ambassador Simon Martin, the Regional Director of the British Council Alan Rutt and others from local industry.

The project funding includes two research positions, one working with me, in Oxford, and the other will be based at the UoB Sustainability Centre. The next step for us will be recruiting for those positions. We will work in parallel with the team at UoB and will hopefully start field work, conducting seawater analysis in October 2017. 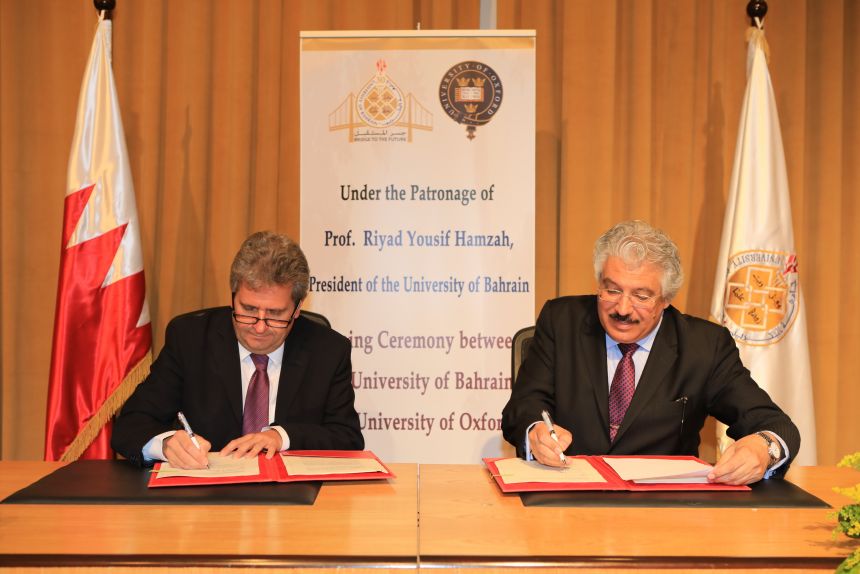 Who will benefit from the research?

The Gulf regions share a common water supply challenge, so those countries will feel the initial benefits. But in the future the work could well be useful internationally and in the UK.

In general though, water desalination has wide benefits and could be useful even in wet countries with rainfall. Even in the UK there can be shortfalls in supply and regional droughts. There is already a desalination plant on the Thames Estuary at Bacton, which supplies clean water to the city of London, so there is scope for collaboration further down the line.

What are your long-term goals with the work?

The initial forecast is for four years, but the potential impact means it could, and hopefully will, run for much longer.

My research centre focuses on water treatment in general, answering questions like ’how do you turn rain water into clean drinking water?’ Another of my key research streams is the biological treatment of wastewater. Recycling wastewater is much more cost and energy-effective than desalination, but it is a concept that scares people. The world is on the brink of a devastating water crisis, so recycling the water used, and using less of it in general is really the only way forward.

The clue is in the name, wastewater. We would be crazy not to recycle it. It is already happening in Singapore, where they drink recycled human wastewater that is now cleaner than tap water. That is where the future is. We are going to have to start looking at our waste differently eventually, so why not now? 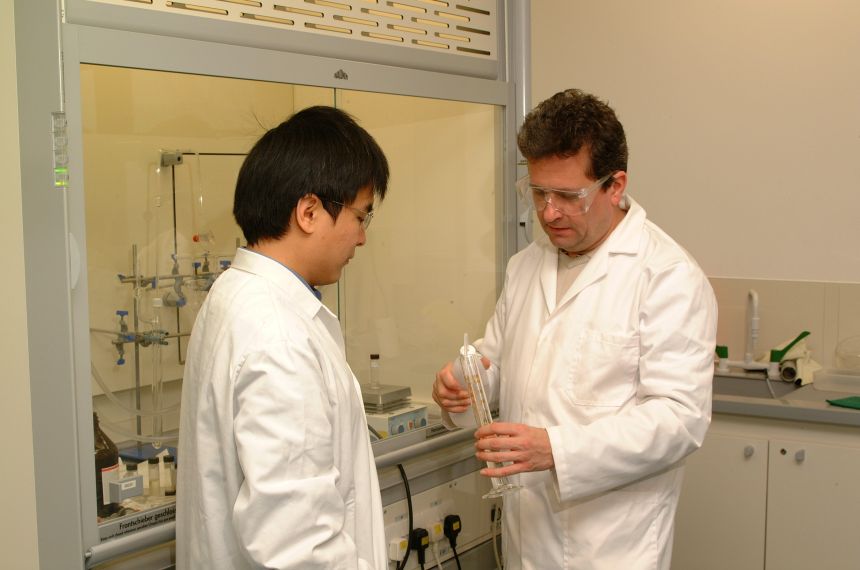 Professor Hankins and a colleague working at his Laboratory of Sustainable Water Engineering. Image credit: OU
Why are ASAP Rocky and Stormzy the talk of Oxford?
Students to play alongside 'legendary' Pakistani singer