The Antibiotics and Activity Spaces project is based in Thailand and Lao PDR.

The Antibiotics and Activity Spaces project is a survey of 4,800 villagers in Chiang Rai (Thailand) and Salavan (Lao PDR) to better understand (1) how people access healthcare and what actually counts as 'problematic' antibiotic use, (2) whether antibiotic-related information from educational activities spreads or simply evaporates in village community networks, and (3) whether there are simple 'early warning' indicators (eg specific symptoms) to detect whether people are likely to have 'problematic' antibiotic use. The project is hosted by Oxford's Centre for Tropical Medicine and Global Health.

A healing stone brought from Burma a generation ago lies alongside a tiger claw on Abor’s wooden table. Scraping this 'Black Stone' against a rock creates a fine grey powder, which Abor dissolves in water and applies to wounds that he had previously perforated lightly with a hammer holding small nails. Legends tell of people with broken bones who, unable to stay off work during the hospital’s recommended three-month recovery period, would convalesce within a week after receiving Abor’s treatment.

Abor’s story and the legends around the Black Stone are just one of the many fascinating tales of treatment that the Antibiotics and Activity Spaces survey team encountered during a demanding journey to 72 villages and more than 15 different ethnic groups in Northern Thailand. Tales about herbal medicine, ghost doctors, sacred books of chants, and ceremonial posts highlight that healing maintains firm though waning links to local knowledge and belief systems even in an economy and society transitioning as rapidly as Thailand’s.

The villagers who told their stories would still seek care from doctors for serious health conditions, using traditional healing often only as a secondary step when they had started to lose hope about the ability of formal healthcare to cure them. Traditional healing and medicine therefore do not necessarily compete with or substitute for formal healthcare from trained doctors and nurses. Rather, tradition blends into and complements modern forms of healing that have their own limitations.

One example of the blend of the traditional and the modern is the work of Grandma Kaew. The skills and knowledge for her work as a herbalist had been passed down to her from previous generations, enabling her to produce herbal compresses and mixtures and to blow ancient chants on to patients’ wounds. Practical reasons also require her to process herbs efficiently, owing to which she also blends sun-dried herbs and packages them in capsules for easier storage and administration. Her industrious work combines century-old traditions and knowledge with patient expectations for capsules that resemble modern pharmaceuticals. 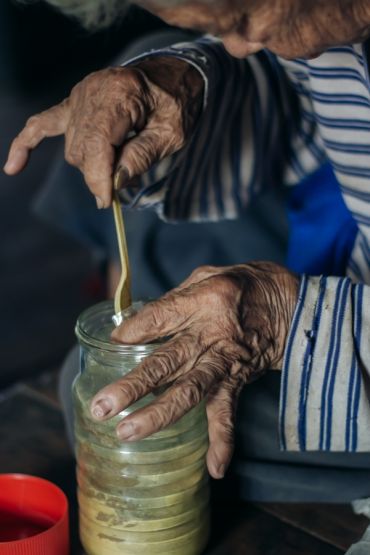 Incidentally, Grandma Kaew’s capsules do not only embody the knowledge and skills of past generations, but they also resemble solutions for acutely current global health policy problems: microbes’ resistance to antibiotics and other types of antimicrobial medicine is growing. Also known as drug resistance, this process makes medicine less effective, infectious diseases more difficult to treat, and it is feared to become the leading cause of death by 2050. One way to counteract this development is to preserve the effectiveness of the medicine by using it as sparingly as possible. Thai health policy follows this approach by promoting the use of herbal medicines through its Antibiotic Smart Use programme, which has equipped nurses and doctors with an alternative to antibiotics should patients expect or demand medicine for non-bacterial infections.

Reflecting on the relationship between traditional medicine and modern global health problems, project leader Dr Marco J Haenssgen argues: 'The Tales of Treatment are not only a vibrant account of Northern Thai culture and customs, but they also reveal an ironic situation in global health. Modern medicine has often discredited traditional medicine as unscientific and created a widespread dependence on Western pharmaceuticals. This dependence has quite plausibly accelerated the development of antimicrobial resistance, yet the threat of antimicrobial resistance may also entail a recognition of traditional forms of healing as a substitute for needless antimicrobial use. While we do see a co-existence of different systems of medicine in some health systems like in India and China, there is perhaps more that Western biomedicine can and should learn from local knowledge.'

This provided an opportunity for visitors to envision the gradual blend of the 'traditional' and the 'modern', as research officer Ern Charoenboon recalls: 'It’s not only interesting to learn how villagers make sense out of modern medicine during our time in the field, but when we brought the stories from Chiang Rai to Bangkok, it was also fascinating to see how urban dwellers interpret these "traditional treatments," "old-days solutions," and "rural beliefs."'

The exhibition also shared a glimpse of early research findings from the Antibiotics and Activity Spaces project and paid tribute to the hard-working survey teams in Thailand and Lao PDR who made this work possible.

The Antibiotics and Activity Spaces project is funded by the Antimicrobial Resistance Cross Council Initiative supported by the UK's seven research councils in partnership with the Department of Health and Department for Environment, Food & Rural Affairs (grant ref. ES/P00511X/1, administered by the UK Economic and Social Research Council).