A reflectively spotty Gynanisa minettii caterpillar emerges from a bush in Tanzania.

A conservation DPhil student at Oxford University has won the student section of the 2016 British Ecological Society Photographic Competition. 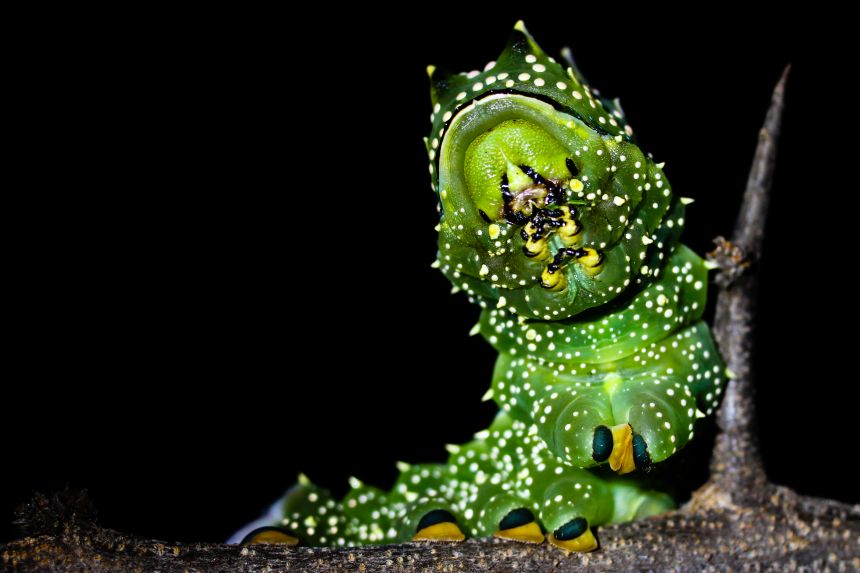 A reflectively spotty Gynanisa minettii caterpillar emerges from a bush in Tanzania.

Leejiah is a DPhil student in Oxford's Department of Zoology conducting research into human-wildlife conflict in Tanzania. His research tries to understand some of the factors that contribute to conflict between large carnivores and pastoralists – for instance, understanding in which seasons and habitat types livestock are most at risk of being attacked by lions or hyenas.

He said: 'This picture was taken at my field site around Ruaha National Park in Tanzania. I frequently search for animals around my camp at night, as there are a number of slightly more unusual creatures that are more active and visible at night. This moth caterpillar's almost reflective skin was hard to miss under torchlight, and it obliged me with some interesting poses while I photographed it.

'I enjoy using photography to share aspects of the natural world that I find beautiful or unusual, so it's great to have a picture recognised by the British Ecological Society. Hopefully, along with the other photographs, my photography will help in some small way by inspiring interest in the natural world and action to help conserve it.'