Our understanding of how to manipulate and control liquids in technology has been transformed by the functional surfaces evolved by living organisms to interact with their environment. Water-repellent lotus leaves, water-collecting wing-cases of desert beetles, and water-removing gecko skin are some of the many organisms that have inspired solutions to challenges in liquid manipulating technologies. The requirement for liquid-repellent surfaces infiltrates industries from architecture, to medical devices, and household products. 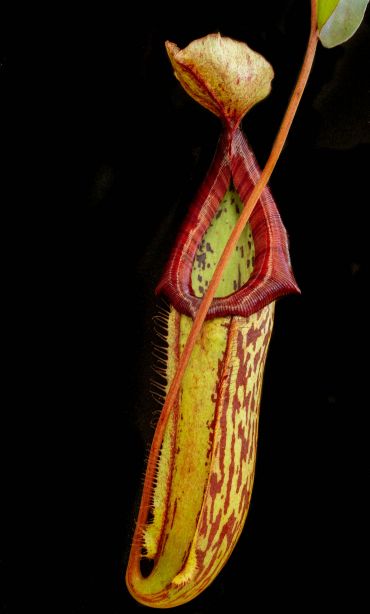 The carnivorous Nepenthes trap
Lubricated surfaces in a technological context are referred to as Slippery Liquid-Infused Porous Surfaces (SLIPS). They lock in water and create a self-cleaning surface on metal, plastic and textiles to repel contaminants. Interestingly, SLIPS technology is inspired by the slippery surface of a carnivorous pitcher plant (Nepenthes). Pitcher plants produce pitfall traps, derived from leaves, to attract, capture, retain, kill and digest animal prey (usually insects) to enable them to survive in nutrient-poor environments. A key trapping feature of the pitcher is the peristome, which has sloping, macroscopic ridges, in turn made up of microscopic ridges. When wetted, the peristome becomes highly slippery which leads insects to slide off it, into the trap, where they become broken down within a pool of digestive juices, releasing nutrients for the plant.

A shortfall in SLIPS has been the lack of drop-solid interaction, which means that controlling the motion of liquid droplets upon their surfaces is inherently difficult. Importantly, this lack of controlled droplet transport has limited the application of these liquid-shedding surfaces in droplet-based technologies. Mechanisms for harnessing the directional transport of droplets will be important for informing the design of synthetic surfaces that transport droplets in a controlled way. Such mechanisms could be applied to technologies such as rainwater harvesting and anti-fogging coatings, as well as to rapidly expanding new technologies such as Micro-Electro-Mechanical Systems (MEMS) and digital microfluidic devices.

Examining functional surfaces in nature may also offer insights into the evolution of natural systems. Whilst the trapping mechanism of carnivorous pitcher plants is well documented, the functionality of the grooves on the peristome surface remains relatively unexplored. In our recent paper, we show that capillary action pins droplets to the parallel, water-infused grooves, and directs their transport in a controlled way. This indicates that the ‘pitfall’ trapping mechanism is enhanced by the water-infused, grooves on the slippery peristome surface, which drive prey into the trap in a way that is more tightly controlled than considered previously, and avoid arbitrary slippage.

Based on our observations of ants, Drosophila flies, and droplets sliding on the slippery peristome, we created artificial surfaces, inspired by the plant, capable of trapping, retaining and directing the travel of liquid droplets. We created various models including steps and trenches, upon which we positioned liquid droplets and observed their behaviour. Droplets in contact with ‘features’ (analogous to the grooves on the natural peristome) became strongly adhered and would not detach easily, but were free to slide along the feature.

In other words, the features had a strong retention influence. They trapped and retained the droplets, even when held upside down, and controlled the direction of droplet travel. Furthermore, the droplets would slide along the grooves at remarkable shallow angles – even just a few degrees. These findings reveal a potential mechanism for developing systems in which the transport of droplets is guided by curved ‘energy railings’. These would provide a biomimetic means of transporting and sorting droplets that is straightforward to implement in droplet-based fluidic devices and could enable the efficient mass transport of liquids along pre-determined pathways.

Find out more about the work of Jian Guan.

Read the full paper in The Royal Society: 'Guided droplet transport on synthetic slippery surfaces inspired by a pitcher plant'.

Beyond regulating trade: understanding the consumers driving Saiga horn demand
How can evolutionary biology help to get rid of antibiotic resistant bacteria?