Gels are useful: we shave, brush our teeth, and fix our hair with them; in the form of soft contact lenses they can even improve our eyesight.

Recently, researchers at Oxford University’s Department of Engineering Science have been investigating ‘smart gels’ that can switch from a stable gel to a liquid suspension of very small particles (a ‘sol’).

Now they report in the journal Advanced Materials that they have discovered a new family of gel-like materials whose behaviour is extremely unusual; not only is their ‘shape-shifting’ from gel to sol entirely reversible but it can be triggered by a range of stimuli including heat, mechanical pressure, and the presence of specific chemicals.

So what makes these new smart gels so smart?

The gels are actually hybrid materials that assemble themselves from metal and organic components, explains Abhijeet Chaudhari, a DPhil student in the Multifunctional Materials & Composites (MMC) Laboratory at Oxford University's Department of Engineering Science, who is the first author of the report.

‘When we scrutinised the hybrid gels under a scanning electron microscope (SEM), we were astounded to see exquisite fine-scale fibre architectures, which are completely different from those known in any other contemporary gel materials,’ Abhijeet tells me. They then discovered that intertwined amongst these microscopic fibres were a profusion of nanoparticles around 100 nanometres in size. An X-ray diffraction technique confirmed that these were nanoparticles of ‘HKUST-1’, a copper-based Metal-Organic Framework (MOF) notable for its very large surface area (exceeding 2000 square-metres in each gram).

Professor Jin-Chong Tan of the Department of Engineering Science, who led the team, says: ‘Because of its fine-scale fibre network architecture, which is hierarchical in nature, the new hybrid gels are remarkably sensitive to different combination of external stimulants.’

‘This makes this family of hybrid gels highly tuneable, enabling us to engineer bespoke materials with the desired properties to fit a specific application,’ adds Abhijeet.

To illustrate this, the team demonstrated that by simply switching the types of solvent used in material synthesis the electrical conductive properties and mechanical resilience of the gels can be altered.

The tuneable properties of these materials come from the sol-gel transformation in which an apparently stable gel collapses into a sol and then become a gel again once the external stimuli are removed. This behaviour is driven by what is happening inside the material at the microscopic scale where there is rapid molecular bond-breaking (gel to sol) and bond–making (sol to gel).

Jin-Chong says: ‘This fascinating phenomenon is exceptionally rare for gel systems incorporating MOF nanoparticles; to the best of our knowledge this is the first example of its kind reported in the literature.’

Such shape-shifting materials could find applications in Microelectromechanical Systems (MEMS) and NEMS devices. They could also create ‘self-healing’ coatings that can repair themselves after impact or corrosion damage or in energy technology to build new electrolytes for rechargeable batteries or enhanced dielectrics for supercapacitors.

But it’s the promise of MOF nanoparticles suitable to make into thin films for sensors and microelectronics that is particularly alluring.

Abhijeet explains that conventional methods of MOF thin film fabrication are costly, laborious, and mostly limited to creating small surface areas, making them unsuitable for large-scale commercial use: ‘We discovered that copious amounts of high-quality HKUST-1 (MOF) nanoparticles can be straightforwardly harvested by breaking down the gel fibres using methanol.’

‘These MOF nanoparticles can then be used as a ‘precursor’, making it easy to fabricate multifunctional thin films on various substrates. These thin films can, for instance, function as a coupled temperature-moisture sensor that rapidly switches from turquoise to dark blue colour for easy identification, reversibly, upon heating.’ 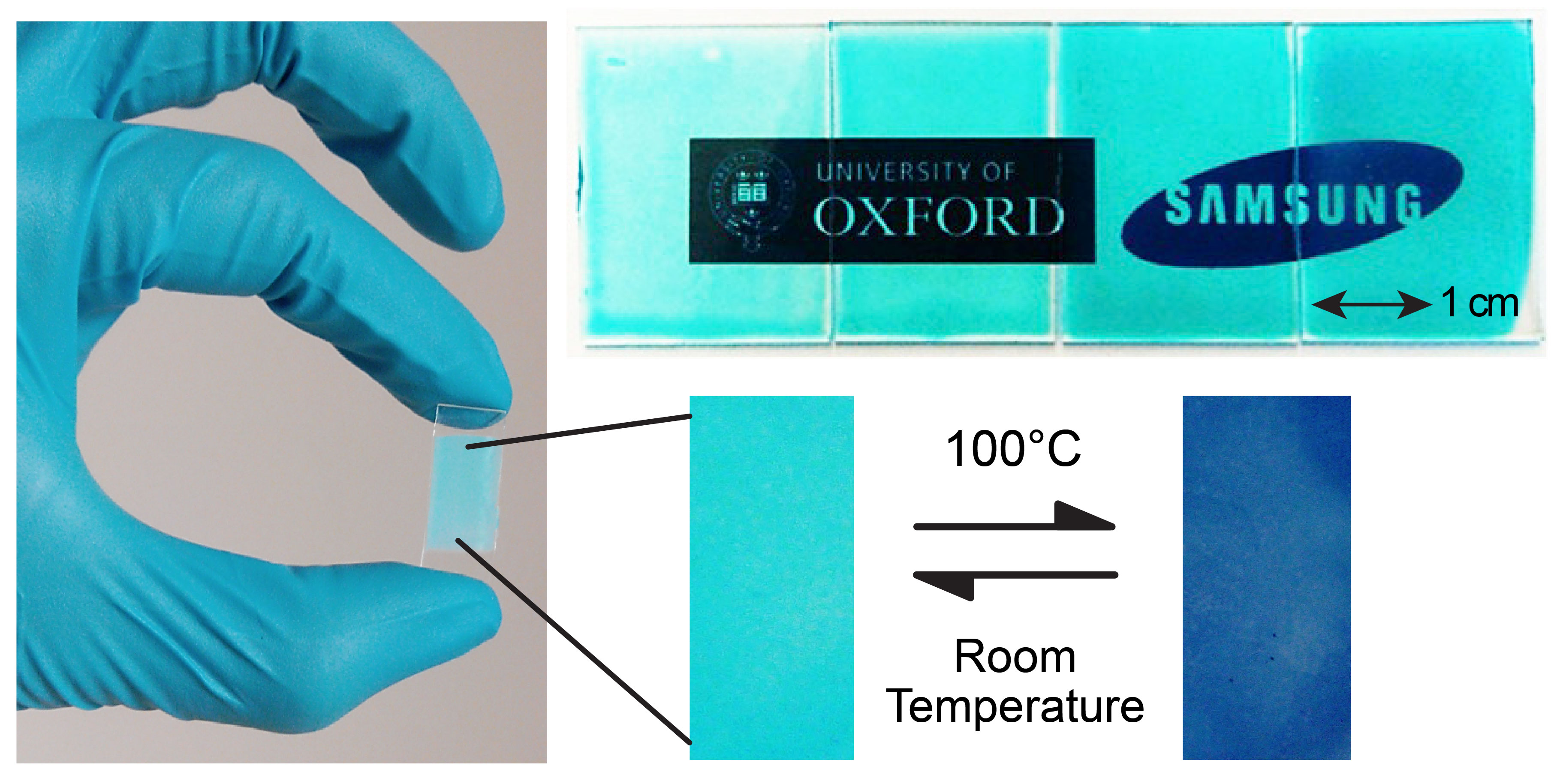 The team worked with Isis Innovation to patent the technology and Samsung Electronics, who part-funded the research, are looking to translate this discovery into a range of real-world applications including optoelectronics, thin-film sensors, and microelectronics.

‘We believe our method has huge potential,’ comments Jin-Chong, ‘it opens the door to exploiting MOF-based supramolecular gels as a new 3D scaffolding material useful for engineering optoelectronics and innovative micromechanical devices.’

In the future, it seems, smart gels could lead to some very smart technology.

Tweeting in Old English
Video: Scientists, medics and mathematicians get to work on the mysteries of the human brain