Professor Smith has been awarded the Polar Medal by Her Majesty the Queen, in recognition of his “outstanding achievement” in the field of Arctic research. Smith has over thirty years' geological experience, particularly in Greenland.

Many scientists may dream of receiving royal recognition for services to their field, but for Professor Paul Smith, director of Oxford University Museum of Natural History, it is reality. In early January he was awarded the prestigious Polar Medal by Her Majesty the Queen, in recognition of his “outstanding achievement” in the field of Arctic research.

As a palaeontologist and polar scientist, with extensive expertise working in the high Arctic, Professor Smith has over thirty years’ geological experience, particularly in Greenland. His research has informed understanding of some of the world’s most uninhabited, little known regions. His achievements include being part of the team that created the first geological maps of the northern Greenland.

ScienceBlog sat down with Professor Smith to get his reaction to winning the award and to learn more about his career.

Congratulations on this spectacular honour, where were you when you found out you had won?

I was sitting on a delayed train, on the way home, just before Christmas, when I received an email that I had won. It made a long, uninspiring journey a lot more memorable.

With the exception of glacial deposits, much of the Arctic landscape is exposed rock, which makes it a big attraction for geologists.

Why did you decide to specialise in Arctic research?

As a geologist and a keen climber and hillwalker interested in remote areas you could say it was a natural fit. But it was my first trip to Greenland that sealed the deal. I had just completed my PhD, when I was invited for the first time on a large-scale expedition, creating a geological map of the furthest north part of Greenland. A dream opportunity.

For those that haven’t yet had the pleasure of experiencing the polar-regions, Greenland is a landscape unlike any I have ever seen before. Unspoilt, mountainous and spectacular.

We worked remotely, in teams of two, completely isolated from the rest of the group. We would be taken by helicopter, to a remote location where we would conduct all of our mapping. Then a week later, the helicopter would return with fresh food and take us further on to map the next area, and so on.

There were twelve pairs of geologists scattered across northern Greenland, so although we were working in isolation we all kept in touch via radio, for safety and lively evening banter. 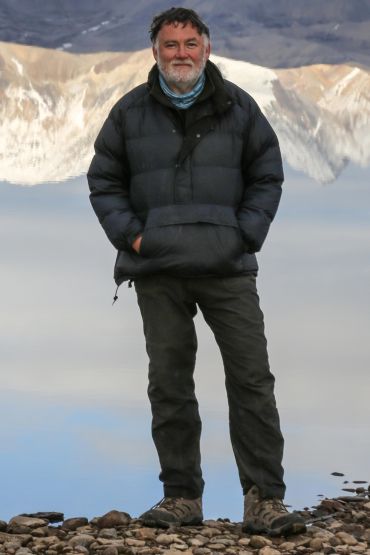 Professor Paul Smith, director of Oxford University Museum of Natural History and Arctic scientist
I imagine in a career spanning three decades it is hard to choose one landmark achievement, but do any expeditions particularly stand out?

About 15 years ago I was involved in a highly complicated piece of geology, on the north eastern tip of Greenland. There had been a number of unsuccessful attempts to unravel the work, but my colleague and I wanted to achieve it ourselves. The bulk of the work was conducted on foot, but the helicopter was always on hand for support if needed. Over two summers we mapped an area around the size of Wales. I know that is the standard measure of land area, but it really was about the size of Wales. To this day I still consider this project one my proudest scientific achievements.

In terms of more recent work, can you tell us a little about researching the Cambrian explosion and why it has such high geological importance?

Most recently and throughout my career, I have been working collaboratively on a special locality, right above the north coast – about 500 miles from the North Pole. Here fossils are exceptionally preserved, which means geologists are not just working from shells or skeletons, but also the muscle tissues and soft tissues that aren’t normally preserved. The region is about 530 million years old, and at a point in time when most of the major groups of animals begin to appear in the fossil record.

This is an event called the Cambrian Explosion. Being able to attack a really fundamental scientific problem in a place that is so special, is very enjoyable as well as being hard work.

What is your fondest Arctic memory?

It has to be those occasions where you capture the perfect golden light in the Arctic. Photographers worldwide talk about the “golden moment.” Just as the sun’s setting, you get five minutes of really stunning light, just before the sun dips below the horizon. But in the far north, the sun never dips below the horizon, so on a nice day, the landscape is bathed in this golden light, for hour, after hour. Often, from eight o’clock at night, through to four in the morning you get to enjoy this glorious, perpetual sunset that never quite goes away. A great photo opportunity, but in my opinion, nothing compares to just sitting peacefully and absorbing it, with a small glass of whisky in hand.

Do you have any polar expeditions planned for the future?

We want to explore an area half way up the east coast of Greenland, where an ancient mountain belt called the Caledonides is well-exposed. It is a deep section through an ancient continent-continent collision zone and we are just in the planning stages of an expedition that we hope to undertake in 2019.

What is the significance of the Caledonides?

One of Greenland’s key geological features is that around 420 million years ago it had a mountain belt that was on the scale of the Himalayas, but it has now been eroded down to its roots. This level of erosion tells us about mountain belt activity, specifically how they grow and the way that they collapse.

The belt was formed by ancient North America colliding with ancient Scandinavia, and runs from the northern tip of Greenland, across the Atlantic, to Scotland, and then back across the Atlantic to the eastern cost of North America. We want to study the point where the mountain belt disappears off the shore of Greenland, to reappear next in North West Scotland. For geologists it is the missing link between the East Greenland and Scottish Caledonides.

Why is Arctic research so important in today’s world?

It is many fold really, and would inspire different answers from different scientists. For glaciologists and those interested in climate change, it is because climate change is currently at its most exaggerated in polar areas. I have been going to the Arctic for thirty years and have seen rapid polar melting at first hand. It is happening, and it shows no signs of slowing down.

Whereas, for geologists and people in my discipline, it is slightly different, the exposed rock is the real attraction. In the arctic we are not hindered by vegetation. There are of course areas covered with glacial deposits, but other than that, there is just the expanse of exposed rock that you just don’t get at lower latitudes. The far north has perfect “outcrop”, as we call it.

If you could have been a part of any scientific discovery from history, which would it be?

We have been exploring the far north since the 19th century, but even now, we get that very rare experience of walking on ground that we know no other human being has walked on before. But to have been a part of those original teams, seeing the entire landscape for the first time, must have been really special. There is one particular explorer, William Scoresby, a whaler who made the first scientific descriptions of northeast Greenland. Each year he would venture further and further north, trying to beat his previous record, constantly finding new terrain and new science. That is pretty special.

What is next for you?

A combination of organising the next expedition, researching the Cambrian explosion and of course, running this great museum (Oxford University Natural History Museum).

Do you have a personal favourite exhibit in the museum?

All museum artefacts have the power to tell stories, but very few can tell as many exceptional stories as the Dodo.  Which has not only informed understanding of bird evolution, but also human induced extinctions, early trade routes and European exploration, and the creation of early natural history museums. Add to that a visit in 1860 from a certain Lewis Carrol and a little girl called Alice, and the Dodo has earned iconic status, crossing cultures, generations and the world.

What would you like your scientific legacy to be?

Someone who pushed forward a scientific understanding of Greenland and the Cambrian Explosion.

Climate change is currently at its most exaggerated in polar areas and having worked in the Arctic for thirty years, Professor Smith has witnessed rapid polar melting at first hand. Of the experience he said: "It is happening, and it shows no signs of slowing down."