When Peter Medawar began his research career at Oxford University in 1935, he remarked that he was '(allocated) a room much too good for a beginner'.

This generous gesture from Professor Howard Florey who allocated the room turned out to be far-sighted: while at Oxford, Peter Medawar made the first discoveries that ultimately led to him winning the Nobel Prize for physiology or medicine in 1960.  His eventual discovery of how the body can learn to accept tissues from another donor opened the door to successful organ transplantation

He was also a well-known science communicator in his day, giving the 1959 BBC Reith lecture and writing numerous books and articles for a general reader. Richard Dawkins has called him 'the wittiest of all science writers.'

2015 marks the centenary of his birth, which has just been celebrated with a special lecture series at the Department of Zoology, where he was an undergraduate.

Peter Medawar completed a first class honours degree in Zoology at Oxford in 1935, after which he was awarded the Christopher Welch scholarship and the senior demy of Magdalen.

But the Zoology department did not have the equipment for the tissue culture work which became the focus of Medawar’s DPhil, so he was dispatched down South Parks road to the Sir William Dunn School of Pathology. The School was the site of a new state of the art lab – and a new Professor of Pathology, Howard Florey. 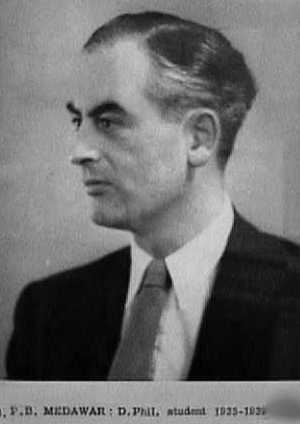 Howard Florey himself won the 1945 Nobel Prize for physiology or medicine for his role in the making of Penicillin, the new 'wonder drug' whose effects were nothing short of miraculous at the time.

The research team that Florey recruited – including the young Peter Medawar – ushered in the modern age of antibiotics.

While Medawar was mostly working on tissue cultures at this point, he also contributed experimental results to the famous second 'Penicillin paper' which established Penicillin’s effects in a living organism, even though he is not credited as an author.

Medawar continued working in Oxford as the second world war began, dramatically changing the direction of his research.

During the Battle of Britain, the now-married Peter Medawar and his wife heard an aeroplane flying low over their Oxford garden, followed by an almighty crash. Oxford was spared the bombing that affected many other cities, and the sound they heard was not a bomb but the crash landing of a British plane.

The plane pilot was badly burnt, and his doctors asked if Medawar's experience with tissue culture could help in treating him in any way. Medawar was also challenged by a colleague who had a clinical interest in the treatment of severe burns to see if he could grow skin in tissue cultures.

Responding to this challenge, Medawar travelled up to Glasgow (where he later claimed that his diet consisted of 'allotropes of porridge'), and worked on transplanting patches of skin from donors to burn patients.

He found that a second set of transplants was rejected much faster than the first, a finding that highlighted the role of the immune system in the rejection of donor tissue.

Back in Oxford, Medawar continued his work on dissecting how the immune system reacted to tissue grafts from another donor, eventually leading to their rejection.

By the time he left Oxford in 1947, Peter Medawar’s research had already established that the body rejected tissue grafts from a genetically unrelated individual through an immune mechanism, and that this mechanism was not mediated by conventional antibodies.

Medawar continued his research at the University of Birmingham and at University College London, writing the seminal Nature paper which described how to make normally-rejected donor tissue grafts immunologically acceptable to the body.

This discovery paved the way for organ transplants. For his role in this work, Peter Medawar was awarded the Nobel Prize for Physiology or Medicine in 1960.

Peter Medawar was struck down by a stroke while delivering a speech in Exeter Cathedral in 1969, but he continued to write through the multiple strokes he suffered until his death in 1987. He made the self-portrait below while recovering in a respite home in 1970. 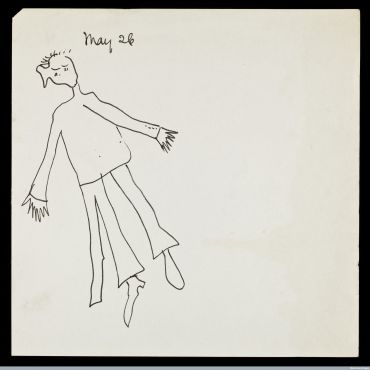 The Peter Medawar Building for Pathogen Research at Oxford University was named in honour of his contributions to scientific research.

'Peter Medawar was an absolutely brilliant teacher,' according to one of his former students, Dr Henry Bennet-Clark, Emeritus Reader at the Department of Zoology. 'He not only made sure that we knew the facts, but he also provoked our interest in science.'

A song of fire and ice in the ocean