The Great Barrier Reef off Australia is the world's largest coral reef system.

As David Attenborough's Blue Planet II series on the BBC nears its conclusion, interest in our oceans is perhaps at an all-time high. One of the most memorable episodes focused on the world's coral reefs – in particular, the damage being caused by climate change.

This month, Oxford hosts the European Coral Reef Symposium, which will bring together experts from around the world to exchange ideas and discuss the latest developments in coral reef research, management and conservation. Tickets for the event – well over 500 of them – were booked up within weeks of its announcement.

The conference is organised by Reef Conservation UK (RCUK), along with the University of Oxford and the Zoological Society of London (ZSL), with support from the International Society for Reef Studies. This year marks the 20th anniversary of RCUK, which was set up and is still run by early-career researchers with a passion for reef conservation.

Dr Catherine Head from Oxford's Department of Zoology is an RCUK committee member and one of the event’s organisers. She said: 'Coral reefs are on the frontline of climate change impact, suffering from major threats such as last year's climate-induced global coral bleaching, and the physical damage likely to be caused by this year's devastating hurricanes in the Caribbean.

'Meetings such as the European Coral Reef Symposium are crucial in bringing together the best minds in coral reef research and management to share findings and ideas to help tackle the threats to coral reefs while there is still time.' 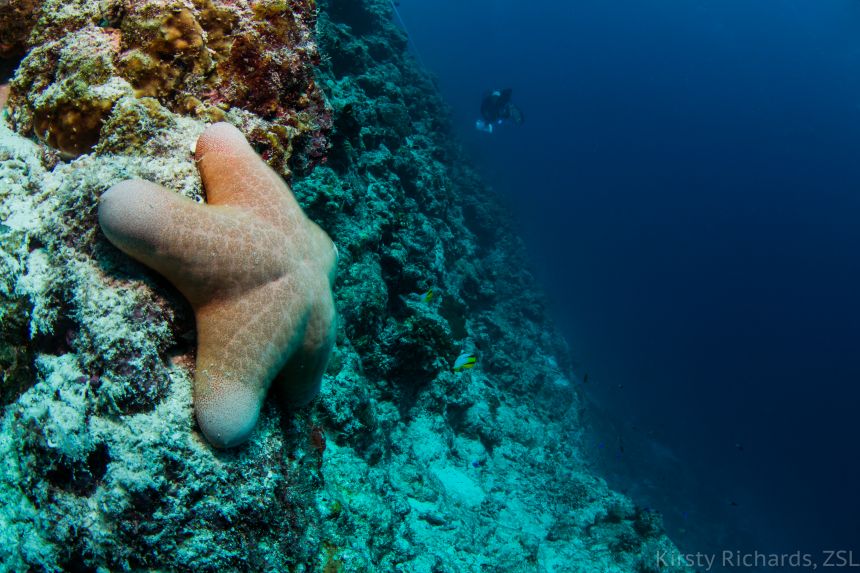 A coral reef in the Maldives (Kirsty Richards)

The UK has a greater direct stake in coral reefs than might be expected, with more than 60,000 km2 of coral reefs in the British Indian Ocean Territory alone. Globally, Europe hosts 7% of coral reefs within its territories – something that will be explored during the symposium.

And while researchers stress the scale and urgency of the threats to our reefs, they are also keen to emphasise that all is far from lost: popular social media hashtags such as #OceanOptimism highlight conservation success stories in an attempt to inspire new solutions. Meanwhile, the Great British Oceans coalition is campaigning to protect the waters around the UK's overseas territories.

Among the plenary speakers at the Oxford-hosted symposium, being held from 13-15 December, is Professor Madeleine van Oppen from the Australian Institute of Marine Science and the University of Melbourne. Professor van Oppen will be presenting her findings from a large project that is investigating whether species of coral can be cross-fertilised to increase their ability to withstand the effects of climate change, including higher sea temperatures. Looking ahead to the symposium, Professor van Oppen said: 'The focus on coral reef conservation and restoration is timely, as the decline of coral reefs is occurring at an alarming rate. Novel interventions to restore reefs and increase reef resilience are urgently needed.'

Other speakers include Professor Nikolaos Schizas from the University of Puerto Rico, and Professor Pete Edmunds from California State University, who have begun analysing the effects of hurricanes Maria and Irma on coral reefs in the Caribbean. High-profile scientists including Professor Morgan Pratchett from James Cook University in Australia – an expert on the Great Barrier Reef – will present their findings on the devastating, climate-induced bleaching events of the past two years.

Kirsty Richards, an RCUK committee member who is also ZSL's marine and freshwater programme coordinator, added: 'We are excited to have been asked to host the European Coral Reef Symposium in our 20th year – the largest gathering of coral reef researchers in the world in 2017. The interest in the event has been incredible.'