The Big Bang has long been taken to be our universe’s beginning. However, recent Oxford University research, published in Physics Letters B, has revealed that Earth’s universe actually existed before the point known as the Big Bang. David Sloan, Postdoctoral Research Associate in Oxford’s Department of Physics, discusses the thought provoking findings.

In the 1960s Stephen Hawking and Roger Penrose proved the “singularity theorems.” These formulae showed that Einstein’s model of the early universe always reaches a point in the past at which it cannot continue. This point is what most physicists have taken to be the beginning of time. However, our findings have shown that although the interpretation of Einstein’s work breaks down, the reality of physics continues.

There have been several previous attempts to resolve the problem of the limits of Einstein’s model, in many cases scientists have created models that introduce new effects to gravity (such as string theory or loop quantum gravity) that alter the models so that they never encounter this problematic point.

Our approach is significantly different in that we do not avoid the Big Bang, but rather continue our solution straight through it to what happened before. We introduce no new principles, and make no modifications to Einstein’s theory of General Relativity--only of the interpretation that is put upon objects. Our findings do not dispute the occurrence of the event, more its position as the beginning of time. Our equations predict that the Big Bang was simply the moment where the orientation of space changed.

In other words, this new research resolves a dilemma in understanding the early universe not by creating a new model of it, but rather by reimagining the interpretation of Einstein’s existing model.

We separate the behaviour of entities in our early universe from the map that they make of the universe, and find that although the map breaks down, physics itself does not.

The technical reason why this is possible is that the equations Einstein developed contain terms which themselves cannot be calculated at the Big Bang – physical parameters such as energy density or curvature which tend towards infinity.

Importantly, however, there is a remarkable property of the equations that until now has been deeply hidden: All the terms that are problematic turn out to be irrelevant when working out the behaviour of quantities that determine how the universe appears from the inside. 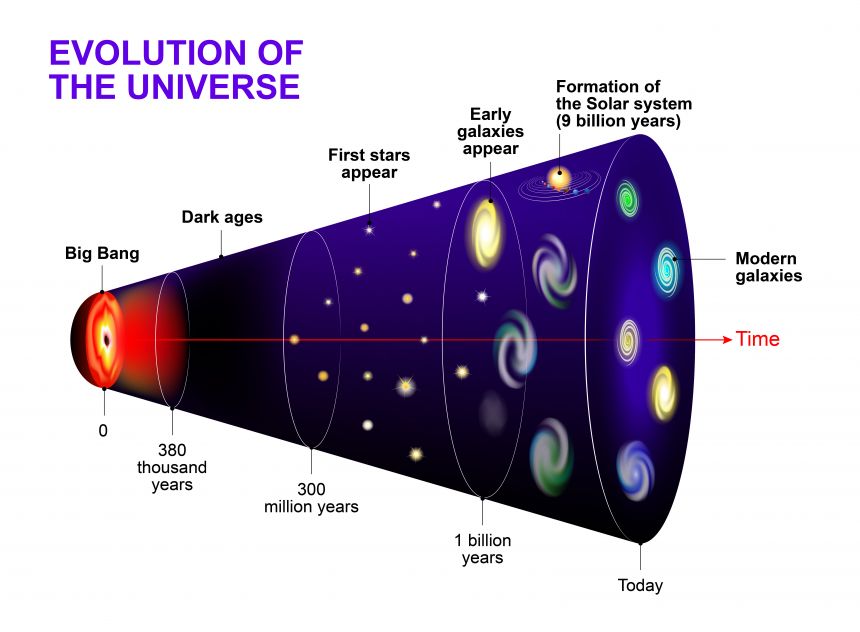 A cosmic timeline of the evolution of our stars, galaxy and Universe after the Big Bang. Image credit: Shutterstock

When seen from the inside, there is no way to measure the overall size of the universe. All that we can see are the relative sizes of objects and their shapes. We then write the equations that determine how these relative sizes and shapes evolve purely in terms of one another without ever referencing the overall scale.

We based our interpretation on these terms and found that there is a well-defined universe on the other side of the Big Bang, where the same interpretation of the theory can be applied. There we see that the universe before the Big Bang looks qualitatively similar to our own with some interesting differences.

There is an inversion of “chirality”, meaning objects that look right-handed in our universe, will emerge left-handed on the other side.

Initial work has shown that thermodynamic quantities like entropy (which determine, for example, how refrigerators work, and the heat we get from the sun) are also inverted, so someone who lived in this universe would experience time that ran the opposite way to our own. From their perspective our universe would be their past.

In future work we hope to gain a better understanding of the details of this mirror universe, this observation has the potential to provide further insights into the nature of time in our universe and our own origins.

Physics Letters B - Through the Big Bang: Continuing Einstein’s equations beyond acosmological singularity