The Ethiopian wolf is the world's rarest canid.

Over the past month, a team from Oxford's Ethiopian Wolf Conservation Programme (EWCP) has implemented the first oral vaccination campaign to pre-empt outbreaks of rabies among Ethiopian wolves, the world’s most endangered canid, in their stronghold in the Bale Mountains of southern Ethiopia.

Described as a turning point in the plight to save Ethiopian wolves from extinction, the campaign follows a decade of intensive research, field trials and awareness work led by the University of Oxford’s Wildlife Conservation Research Unit (WildCRU) and supported by funding from the Born Free Foundation, among others. Working alongside the Ethiopian Wildlife Conservation Authority, regular oral vaccination campaigns will now expand to all six extant wolf populations to enhance their chances of survival. There are fewer than 500 Ethiopian wolves in the world, all in the wild and highly exposed to infectious diseases transmitted by domestic dogs.

WildCRU's Professor Claudio Sillero, EWCP director and founder, said: 'Thirty years ago I witnessed an outbreak of rabies which killed the majority of the wolves I had followed closely for my doctoral studies. We have learned much about these wolves and their Afroalpine homes since then. By the time we detect rabies in a wolf population, already many animals are fatally infected and doomed. We now know that pre-emptive vaccination is necessary to save many wolves from a horrible death and to keep small and isolated populations outside the vortex of extinction. I wholeheartedly celebrate the team’s achievement.' 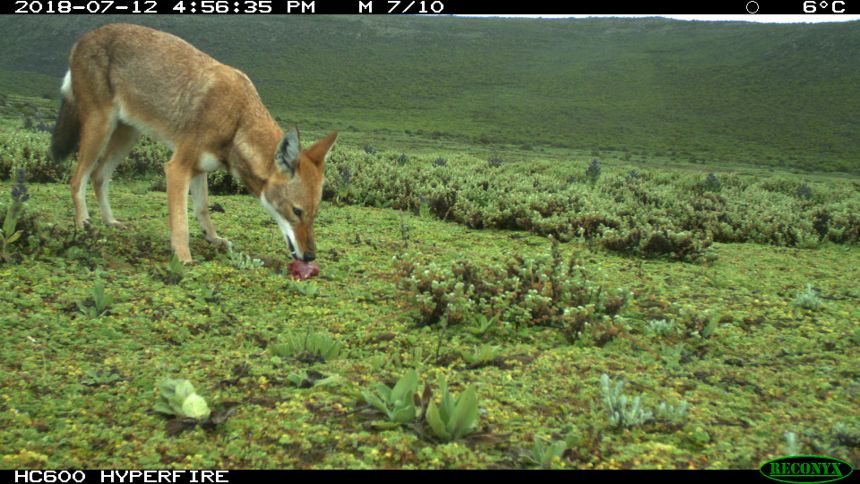 Long-term programmes and targeted research are the cornerstones of biological conservation, as success often relies on an intimate knowledge of the workings of populations, the behaviour of individuals, and the social, political and economic contexts. With a generous donation from pharmaceutical laboratory Virbac of 3,000 SAG2 oral vaccines, EWCP has launched a vaccination strategy, guided by strong empirical information and predictive modelling – and a key component of the National Action Plan for the conservation of the species.

Muktar Abute, EWCP's vet team leader, said: 'Vaccine contained within a meat bait was distributed at night time to three Ethiopian wolf packs. Our target is to immunise at least 40% of all wolves in each population, reaching as many family packs as possible, including the dominant pair – on which pack stability largely depends. We recorded good uptake, with 88% of 119 baits deployed consumed over two nights. Using camera traps we monitored bait consumption, and we will next measure rabies concentration levels in blood to confirm the effectiveness of the vaccine over a larger sample than that of the trials.'

Oral vaccination using SAG2 has been successful in controlling, and even eradicating, rabies in wild carnivore populations in Europe. This approach now raises hope for the survival of one of the rarest and most specialised carnivore species, the Ethiopian wolf. Preventive vaccination can improve the status of other threatened wildlife, and the Ethiopian wolf experience may lead other practitioners to embrace it as part of their conservation toolkit, in a world demanding closer control of pathogens shared by wildlife, domestic animals and humans.