Mathematicians are known for having a brilliant way with numbers, but to have impact beyond their field they need to have an altogether different skill: the ability to communicate.

The George Pólya Prize for Mathematical Exposition, from the Society for Industrial and Applied Mathematics (SIAM), acknowledges and celebrates academics who are both great thinkers and writers.

This year’s recipient Professor Nick Trefethen, Head of the Numerical Analysis Group in the Oxford Mathematical Institute, has been celebrated for bridging the communication gap with his publications. The Society highlights the ‘exceptionally well-expressed accumulated insights found in his books, papers, essays, and talks... His enthusiastic approach to his subject, his leadership, and his delight at the enlightenment achieved are unique and inspirational, motivating others to learn and do applied mathematics through the practical combination of deep analysis and algorithmic dexterity.’

Professor Trefethen discusses receiving the honour and why his field is the fastest moving laboratory discipline in STEM.

Congratulations on your award, how did you react when you found out you had won?

I was thrilled. There are many accolades to dream of achieving in an academic career, but I am one of the relatively few mathematicians who love to write. So, to be acknowledged for mathematical exposition is important to me. My mother was a writer and I guess it is in my blood.

What is numerical analysis?

Much of science and engineering involves solving problems in mathematics, but these can rarely be solved on paper. They have to be solved with a computer, and to do this you need algorithms.

Numerical analysis is the field devoted to developing those algorithms.  Its applications are everywhere. For example, weather forecasting and climate modelling, designing airplanes or power plants, creating new materials, studying biological populations, it is simply everywhere.

It is the hands-on exploratory way to do mathematics. I like to think of it as the fastest laboratory discipline. I can conceive an experiment and in the next 10 minutes, I can run it. You get the joy of being a scientist without the months of work setting up the experiment.

How does it work in practice?

Everything I do is exploratory through a computer and focused around solving problems such as differential equations, while still addressing basic issues. In my forthcoming book Exploring ODEs (Ordinary Differential Equations) for example, every concept measured is illustrated as you go using our automated software system, Chebfun.

How has your research advanced the field?

Most of my own research is not directly tied to applications, more to the development of fundamental algorithms and software.

But, I have been involved in two key physical applications in my career. One was in connection with transition to turbulence of fluid flows, such as flow in a pipe; and recently in explaining how a Faraday cage works, such as the screen on your microwave oven that keeps the microwaves inside the device, while letting the light escape so that you can keep an eye on your food.

You got a lot of attention for your alternative Body Mass Index (BMI) formula, how did you come up with it?

My alternative BMI formula was *not* based on scientific research. But, then again, the original BMI formula wasn’t based on much research either. I actually wrote a letter to The Economist with my theory. They published it and it spread through the media amazingly.

As a mathematician, unless you’re Professor Andrew Wiles or Stephen Hawking for example, you are fortunate to have the opportunity to be well known within the field and invisible to the general public at the same time. The BMI interest was all very uncomfortable and unexpected. 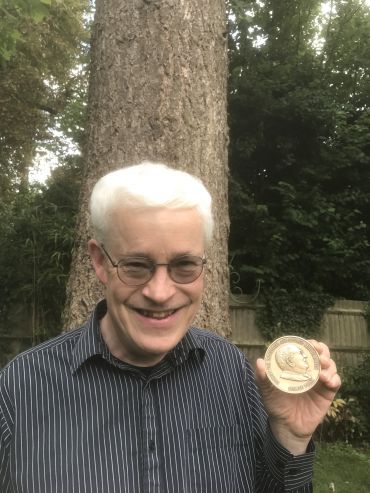 Professor Nick Trefethen has won the George Pólya Prize for Mathematical Exposition from the Society for Industrial and Applied Mathematics (SIAM).

Why do you think so few mathematicians are strong communicators?

I don’t think this is necessarily the case. One of the reasons that British universities are so strong academically, is the Research Excellence Framework, through which contributions are measured. But, on the other hand the structure has exacerbated the myth that writing books is a waste of time for academic scientists. The irony is that in any real sense, writing books is what gives you longevity and impact.

At the last REF the two things that mattered most to me, that I felt had had the most impact, were my latest book and my software project, and neither were mentioned.

In academia we play a very conservative game and try to only talk about our latest research paper. The things that actually give you impact are not always measured.

I just finished writing my latest book on ODEs (due to be published later this year), which I am very excited about.

Have you always had a passion for mathematics?

My father was an engineer and I sometimes think of myself as one too - or perhaps a physicist doing maths. Numerical Analysis is a combination of mathematics and computer science, so your motivations are slightly different. Like so many in my field, I have studied and held faculty positions in both areas.

What is next for you?

I am due to start a sabbatical in Lyon, France later this year. I'll be working on a new project, but if you don’t mind, I won’t go into detail. A lot of people say that they are driven by solving a certain applied problem, but I am really a curiosity-driven mathematician. I am driven by the way the field and the algorithms are moving. I am going to try and take the next step in a particular area. I just need to work on my French.

What do you think can be done to support public engagement with mathematics?

I think the change may come through technology, almost by accident. You will have noticed over the last few decades, that people have naturally become more comfortable with computers, and I think that may expand in other interesting directions.

The public’s love/hate relationship with mathematics has been pervasive throughout my career.  As a Professor, whenever you get to border control you get asked about your title. ‘What are you a Professor of?’ When you reply, the general response is ‘oh I hated maths.’ But, sometimes you'll get ‘I loved maths, it was my best subject’, which is heartening.

What has been your career highlight to date?

Coming to Oxford was a big deal, as was being elected to the Royal Society. It meant a lot to me, especially because I am an American. It represented being accepted by my new country.

Are there any research problems that you wish you had solved first?

I’m actually going to a conference in California, where 60 people will try to prove a particular theorem; Crouzeix’s Conjecture. By the end of the week I will probably be kicking myself that I wasn’t the guy to find the final piece of the puzzle.

The End of ET Fees: A Good day for the Rule of Law
War veteran turned Oxford student to compete at Invictus Games