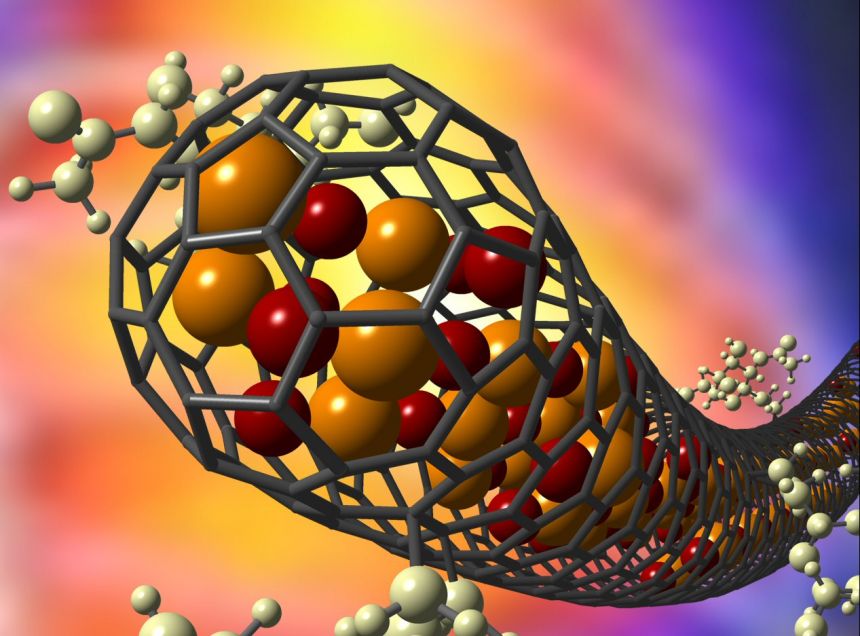 A team, including Ben Davis and Malcolm Green of Oxford University’s Department of Chemistry, report in Nature Materials how they created a ‘cage’ out of a single-walled carbon nanotube and then filled this tube with molten radioactive metal halide salts.

Once the cage, and its cargo of salts, cooled the ends of the tube sealed to create a tiny radioactive nanocapsule with a ‘sugary’ outer surface that helps to improve its compatibility inside the body.

Using this method the team were able to create nanocapsules that could deliver a highly concentrated dose of radiation (800% ionizing dose per gram) of the kind needed for radiotherapy. They then used mice to test how these radioactive nanocapsules would be taken up by the body.

They found that the nanocapsules accumulated in the lung tissue but not in the thyroid, stomach, or bladder as occurred with ‘free’ doses of radioactive salts introduced without first being encapsulated. Even after a week in the body the nanocapsules remained stable without any significant leaking of radiation beyond the lung.

Whilst a lot of further work would be needed to create a treatment for humans, it’s the first time that researchers have shown how such a nanocapsule system for targeted radiotherapy might be made to work inside the body.

As the accompanying News & Views article notes this demonstration shows that: ‘radiosurgery at the nanoscale, from within the human body may have moved a step closer from science fiction to clinical practice.’

How history made science
Science Blog up for award