The impact of ethnic stereotypes on employment: Results from a social experiment on job applications.

Despite their different migration histories, the US and Spain have become the most preferred destinations for Latino migrants, who are among the largest migrant minorities in the two countries. There have been some studies about Latinos’ employment discrimination in the US, but there is virtually no research about the discrimination of Latinos in the Spanish labour market.

During the years 2017 and 2018, we conducted a field experiment to measure discrimination against Latinos in the US and the Spanish labour market.  We sent hundreds of applications (1,547 in Spain, 804 in the US) from fictitious candidates to real job vacancies. Half of the applications were from majority group applicants (US born white applicants in the US, Spanish born applicants in Spain) and the other half was from Latino job applicants. The candidates’ Latino origins were signalled in their CVs with their names and with a reference to their country background in the cover letter (Spanish and Latin American forenames and surnames can be distinguished and we made sure that that was the case in the Spanish experiment). We measured employers’ response to each job application, which could be either positive – when calling back for an interview-, or negative - ignoring or turning our applicants down for the job.

Our research shows that there is an intersection between ethnicity and gender with regard to employers’ discrimination. In the US, only Latino men were discriminated and their probability of receiving a positive response from employers was 13 percentage points lower than for white male applicants. By contrast, only Latino women were discriminated against in Spain, with a positive call-back rate that was 12 percentage points lower than for Spanish-born women. 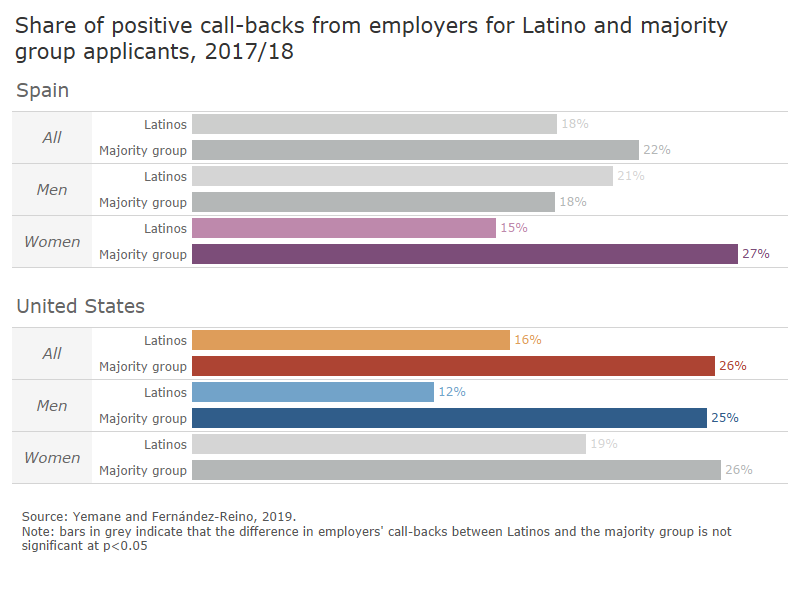 Intersection between ethnicity and gender in employers’ discrimination patterns

Ethnic minority stereotypes are country specific, as they are shaped by the majority-minority relations and history of each minority in a particular context. In the US, Latino men are frequently portrayed in the media as illegal migrants and perceived as threatening and aggressive, while it is not clear that this is the case in Spain. On the other hand, Latino women are seen in the US as docile, traditional and not career-oriented. In Spain, Latinas have very high employment rates though they are often stereotyped as unskilled workers due to their high presence in care work.

Our research examines whether these ethnic and gender stereotypes are behind the different levels of discrimination against Latino men and women in the US and Spain. In order to do that, some applications included information of applicants’ cooperative and friendly personality and/or about their competence and productivity in their current job. Information about candidates’ friendly personality could soften the stereotype of the threatening Latino men, while adding information about applicants’ competence could counteract the Latino women stereotype as unskilled and not career oriented. We also sent applicants to low, medium and high skilled jobs (cooks, payroll clerks, receptionists, sales representatives, IT developers and store assistants).

The discrimination against Latino men in the US disappears when their application includes information about their friendly personality, which underscores that their discrimination is probably driven by employers’ stereotyping of Latino men as threatening and aggressive. Surprisingly, and in contrast to the US, including information about applicants’ warm and friendly personality leads to lower call-back rates for both Latino men and women in Spain.

The discrimination against Latino women in Spain could be shaped to a large extent by their structural position in the Spanish labour market. Employers may stereotype Latinas as domestic workers, which has a negative impact on the labour market prospects of high skilled Latino women. Surprisingly, indicating high levels of competence in their application documents does not soften the discrimination against them. However, Latino women were indeed more discriminated in medium-high and high skilled jobs such as payroll clerks, sales representatives and IT developers.

In the US, discrimination against Latinos is, above all, a male phenomenon, driven by the portrayal of Latino men as ‘threatening foreigners’. The Trump era may have reinforced these negative stereotypes of Latinos, particularly those attributed to Latino men. This stands in stark contrast to the Spanish case, where only Latino women face discrimination, mainly due to employers’ preference for Spanish native women in medium- and high-skilled occupations.

Mariña Fernández-Reino is a researcher at the Centre of Migration, Policy and Society (COMPAS).

This research was part of the H2020 research project Growth, Equal Opportunities, Migration and Markets. For more information, visit www.gemm2020.eu. The paper 'Latinos in the United States and in Spain: The impact of ethnic group stereotypes on labour market outcomes' was published in the Journal of Ethnic and Migration Studies.