A camera drone flying in the sky. Image credit: Shutterstock

The pace of technological development has outrun policy discussions at both a national and international level in recent years. Drone use in particular has improved the efficiency of data collection, allowing teams to monitor and survey large areas without impacting the landscape, day to day life, or their own safety. However, there are some concerns, particularly around ethics, long-term safety and security.

In view of such change, Oxford University’s Centre for Technology and Global Affairs joined forces with drone companies such as Measure, to explore potential governance models for how civil airspace and how the skies in general could be best regulated moving forward.

The Centre, a pioneering interdisciplinary research outlet focused on understanding how technology influences business and governance today, held its first ‘Robotics Skies Workshop: The Role of Private Industry and Public Policy in Shaping the Drones Industry’ (June 21st and 22nd).

The event brought together practitioners, policymakers, and experts from industry, government, and academia to assess the governance and regulatory challenges associated with the burgeoning global Unmanned and Autonomous Aerial Vehicles (UAVs & AAVs) industry.

Lucas Kello, Director of The Centre for Technology and Global Affairs, said: ‘Recent technological advances have outpaced policy discussions. In view of such a development, the Centre's researchers are undertaking interdisciplinary research at the intersection of technology, industry, and government policy.’

The programme included discussions around the latest developments in the sector, such as; the use of drones-as-a-service, Unmanned Traffic Management (UTM), technological advances in geo-fencing, industry-led initiatives in raising safety awareness of drones users, as well as the interplay between data, digitalization, and automation in facilitating future commercialization of UAV and AAV technologies.

High-level speakers at the workshop included Matthew Baldwin, Deputy Director-General of Mobility and Transport from the European Commission, Pavel Abdur-Rahman, Data Scientist and Partner at IBM, Jessie Mooberry, Head of Deployment with Altiscope from Airbus, Christian Struwe, Head of Public Policy Europe at DJI, among others.

The Centre's Founding Donor, Artur Kluz, reflected: "I am pleased to see that the first workshop on the future of autonomous drones perfectly fulfils the Oxford Centre's long-term vision to serve as a powerful policy-building hub for the beneficial development of breakthrough technologies."

Attendee Ludovic Drouin, Science and Technology Officer from the French Embassy in London commented on the value of the workshops, describing it as ‘a tremendous opportunity to witness the state of the art in UAVs, the workshop is foremost in shaping a potential regulatory framework and in understanding inherent challenges associated with the future of the industry.’

Jessie Mooberry from Airbus added: ‘By convening industry, government, academia, and civil service, Robotic Skies fostered necessary deep and wide conversations about the role of automation in our airspace as well as the physical and digital infrastructure required to enable this future.’ 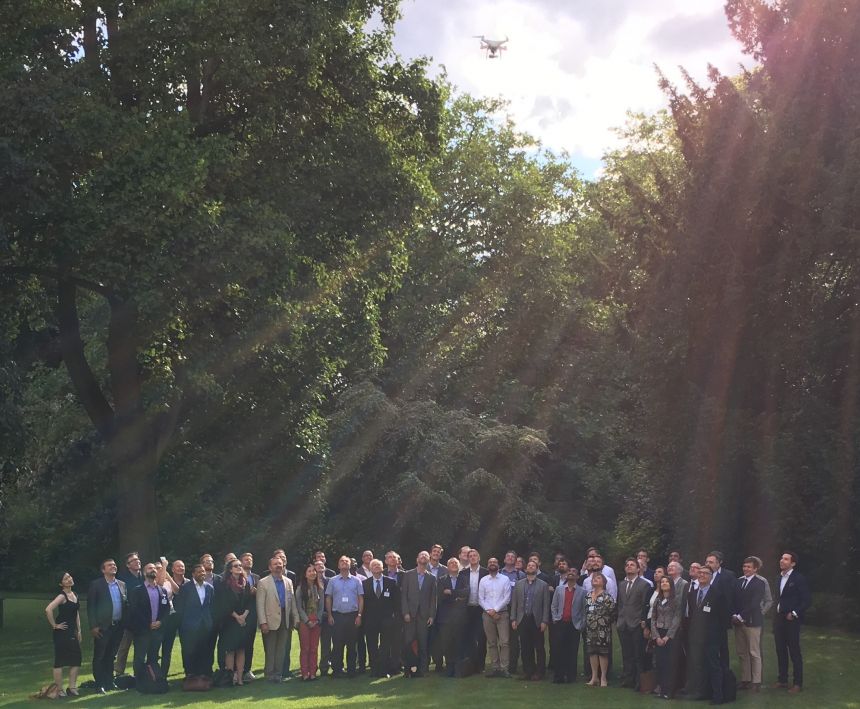 As a global research and policy-building initiative focused on the impact of technology on international relations, government, and society, The Centre serves as a bridge between researchers and the worlds of technology and policymaking, intended to facilitate policy resolution around pressing problems across six technological dimensions: Artificial Intelligence, Robotics, Cyber Issues, Blockchain, Outer Space, and Nuclear Issues. Artur Kluz is Founding Donor of the Centre for Technology and Global Affairs and the Centre was supported by core funding from Kluz Ventures.

Brandon Torres Declet from Measure – who collaborated with the Centre on the workshop, said: ‘It was an honor to participate with Oxford University and drone experts from industry and government to begin an important discussion at the intersection of UAV technology and government policy.’

Robotic Skies is the first in a series of planned events at the Centre, aimed at creating a sustainable forum for inter-sectoral dialogue and driving wide-spread knowledge exchange across industries and disciplines.