Code on a computer screen.

Amy Kao, PhD student at the Department of Psychiatry, Oxford University, reveals how she represented the UK at the international ActinSpace hackathon as part of an Oxford team which combined talents to take on a social problem.

Hackathons have a reputation as a software-heavy coding event welcoming only those with specific skill sets and domain knowledge in computer science. However, as diversity continues to emerge as a pivotal aspect of success for any project, the ActinSpace (AIS) hackathon invited anyone from any background to come and work up realistic ideas using space technology in innovative ways.

The experience was truly memorable. In the beginning stages at Harwell, Oxfordshire, within 24 hours my team and I proposed a satellite-based artificial intelligence application to address street harassment. We worked through the night, inspired by the knowledge that we could be building a technology that could truly make the world a better place.

Our proposed platform was a navigation app to guide you the safest way home. In order to find the safest route, the app estimates the danger on each road segment. Crime record databases in the UK and US are public and annotate with exact geo-location. These can be used to count the number of incidents on each road segment. Using convolutions neural networks and satellite data, the app could accurately estimate the number of pedestrians going along each road. This forms the technical basis of our platform. Additional features are AI-driven velocity tracking that can be used to identify whether the user suddenly stops moving, starts running or even deviating from the intended route, all of which are unexpected behaviours on a normal walk home. Using vibration or non-visual cues avoids the need to be constantly looking down at a phone making you appear less lost, and a much less of a viable target.

We pitched our product in seven minutes the following day, and won the hearts of the UK judges. This gave us the unique opportunity to represent the UK at the international semi- finals in Toulouse.

This was an enormous event gathering teams from over 30 countries, all with exciting and novel technologies.

The finals competition in Toulouse brought together people from across the world sharing a passion for technology and innovation. However, it also sadly highlighted the lack of diversity and representation that remains. 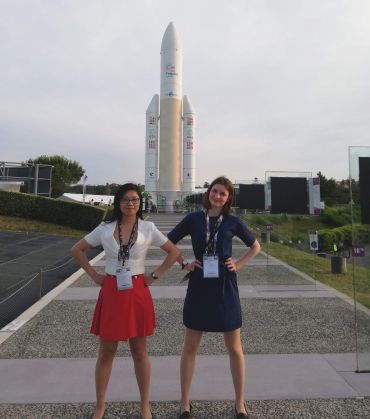 The AIS 2018 had 23% female participation, but only one team among the six finalists had a female team member. There has been considerable movement in increasing this number; however, we see it as our social obligation to do our part and encourage our female peers to take part and pursue activities that they didn’t think they could achieve.

The best part of the team was our diversity, where we were five students from five different countries, coming to Oxford to study five extremely different disciplines (computer science, economics, medicine, physics, psychiatry) ranging from fresh undergraduates to seasoned DPhils. The hackathon really was a problem-solving event, not a software-heavy event at all. It provided the opportunity of working with other astute individuals to propose a holistic solution using space technology and creative business models.

The burst of productivity over one 24-hour period can be extremely refreshing. I would really encourage others to take part, particularly if you’re not in any mainstream programming fields, and even more so if you’re part of an underrepresented demographic (e.g. women in STEM). My bachelor’s was in cell and molecular biology, and my postgraduate research degrees were in pharmaceutical science and neuroscience; perhaps as far removed from space technology as you can get, let alone participating in a hackathon! The mentality of industries are shifting from the limiting idea of entering a career based entirely on what you studied in school to a dynamic stage that embraces diversity and different approaches to solving a problem. Domain knowledge can be quickly accumulated, but the courage to pursue something outside your normal comfort zone and the confidence that you have meaningful contributions requires deliberate time and context to be developed. Just give it a try!

MPLS runs an Enterprising Women lunch and learn in week 4 of each term, welcoming all researchers interested in developing of a supportive network of STEM women. Details are always advertised via eship.ox.ac.uk