For millennia birds have been prized, even hunted, for their beautiful plumage but what makes their feathers so colourful?

A new X-ray analysis of the structure of feathers from 230 bird species, led by Vinod Saranathan of Oxford University’s Department of Zoology, has revealed the nanostructures behind certain colours of feather, structures that could inspire new photonic devices.

A report of the research appears in the Journal of the Royal Society Interface. 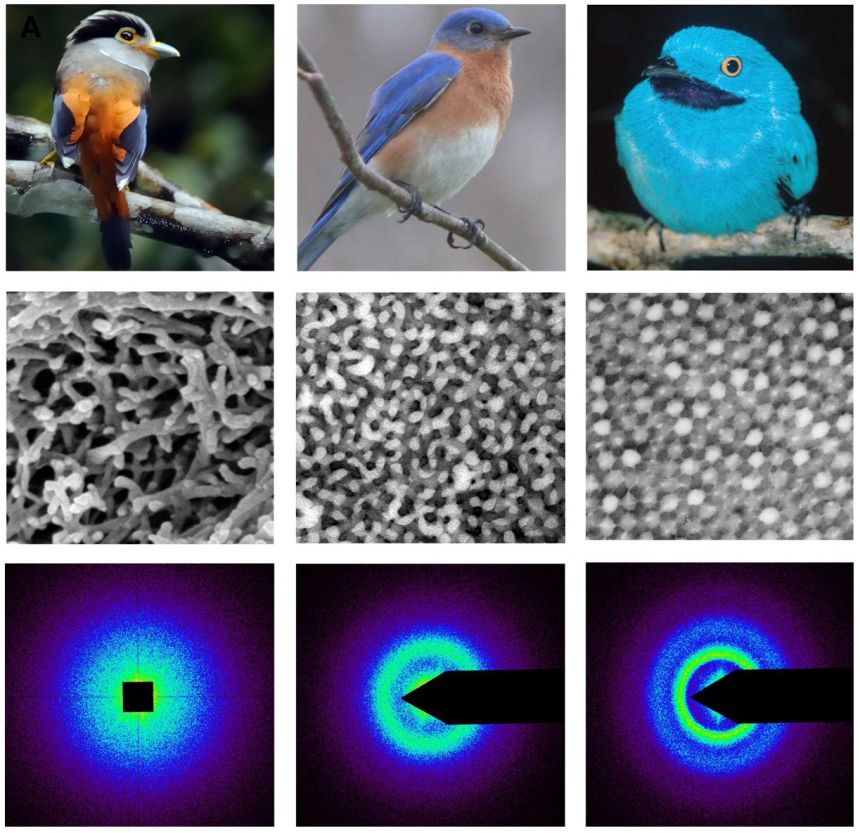 ‘Pigments or dyes are the most common ways to make colour in birds as in other organisms. Pigment molecules absorb certain portions of the white light spectrum and the portions that are not absorbed manifest as the colour we see,’ Vinod tells me.

‘For instance, melanosomes, granules filled with the pigment melanin, produce blacks, browns and reddish-browns in feathers, whereas other pigments such as carotenoids produce the majority of bright yellow, orange or reddish colours.’

He explains that parrots even have their own class of pigments (psittacofulvins) which give them their vivid yellow and red plumage.

‘However, there are no known blue pigments found in vertebrates and the only known green pigment in birds is found in turacos, a group of birds endemic to sub-Saharan Africa,’ Vinod says.

‘Birds have evolved to produce shorter and middle wavelength colours such as violet, indigo, blue and green structurally instead by the scattering of light photons by nanoscale sub-surface features in the feathers that are called biological photonic or biophotonic nanostructures.’

It was these ‘structural’ (as opposed to ‘pigmentary’) colours that Vinod and colleagues from the US set out to investigate.

Vinod explains: ‘These features are basically repeating variation in material composition on the order of a few hundred nanometres, which matches the wavelengths of visible light.

‘In bird feather barbs (barbs and barbules are respectively the primary and secondary branches of a feather), the complex nanostructures, made up of the protein beta-keratin and air, occur in one of two fundamental forms - either as a tortuous network of air channels in keratin (like a porous sponge) or as an array of spherical air bubbles in keratin (like Swiss cheese), but sometimes as more disordered and highly variable versions of these two forms.’

Despite this apparently chaotic arrangement the team’s X-ray scattering experiments found a kind of order (known as ‘quasi-order’) in the variation and sameness of feather structures that accounts for their unusual optical qualities.

Because the quasiordered architecture of barbs interacts strongly with light, often producing double peaks, pure green or red colours cannot be produced structurally. But, Vinod tell me, many birds have evolved a way round this:

‘Some birds such as the tanagers found in the Neotropics, have combined an orange or red pigment with a spongy barb nanostructure tuned to reflect in orange or red wavelengths in order to make bright and saturated colours, which cannot be produced using either biophotonic nanostructures or pigments alone.’

Not only have very similar barb structures evolved independently in many families of birds (at least 44) but these look very much like other nanostructures seen in the physical world, such as beer foam, corroding metal alloys, and oil-in-water. It suggests that, like these latter structures, feather nanostructures may have evolved by a process of self-assembly (the phase separation of keratin from the cytoplasm of the spongy barb cells).

‘This suggests that many lineages of birds have independently evolved to utilise the self-assembling properties of a polymerising protein in solution to create optical nanostructures,’ Vinod comments.

The findings feed into his current work with Ben Sheldon studying the ultraviolet light reflecting crown structural colour ornaments of blue tits, which males use to attract females and see off rival males:

‘That these barb nanostructures could be self-assembled intracelllularly from beta-keratin, the most basic constituent of feathers, suggests that there may be little or no cost involved in producing such structural colours.’

Yet the secrets of structural colours aren’t just for the birds, they could also help to develop new materials for photonic devices that would not allow the passage of a certain band of wavelengths in any direction: such materials are currently hard to fabricate defect-free and on an industrial scale.

Vinod comments: ‘The nanostructures in bird feather barbs, that are likely self-assembled and have evolved over millions of years of selection for a consistent optical function, could be used to inspire novel photonic devices.

‘They could be used as biotemplates for the fabrication of photonic materials using better technological raw materials (such as titania or silica), or we can try and mimic their process of self-assembly using synthetic polymers for colour tuneable applications.’

So, in the not too distant future, we could be growing our own artificial feathers not just to dazzle and amaze but to harness the power of light.

A report of the research, 'Structure and optical function of amorphous photonic nanostructures from avian feather barbs: a comparative small angle X-ray scattering analysis of 230 bird species', is published in the Journal of the Royal Society Interface.

Cocoon clue to lightweight armour & cars
Statins for the many?