Image shows a galaxy where the star formation is obscured by large amounts of dust. Image credit: NASA, ESA, the Hubble Heritage (STScI/AURA)-ESA/Hubble Collaboration, and A. Evans (University of Virginia, Charlottesville/NRAO/Stony Brook University)

Miguel Pereira Santaella, Research Associate at the Oxford University Department of Physics, discusses his newly published work observing never before seen water transitions in space. He breaks down how the discovery will help scientists to answer big planetary questions and build a more accurate understanding of the universe.

From clouds to rivers, and glaciers to oceans, water is everywhere on Earth. What’s less well-known, though, is how abundant the molecule is in space.

Unlike on Earth, most of the water in space takes either the form of vapour or forms ice mantles stuck to interstellar dust grains. This is because the extremely low density of interstellar space - which is trillions of times lower than air, prevents the formation of liquid water. the birth of star formations can tell us about how the Universe behaves. But, since the only way to study them in such dust obscured environments is through the infrared light, detecting water transitions capable of detecting this light, is of vital importance.

Observing the birth of star formations can tell us a great deal about how the Universe behaves. But, since the only way to study these events in such dust obscured environments is through the infrared light, detecting water transitions capable of capturing this light, is vital.

Water molecules experience fluctuating quantum energy levels. This activity allows us to observe them and is known as a water transition. The term refers to the best point for scientific observation, which is the exact wavelength at which water molecules go from one quantum state to another, emitting light and increasing their visibility as they do so.

The majority of these transitions are not very energetic so they appear in the far-infrared and sub-millimetre ranges of the electromagnetic spectrum, with tiny wavelengths (ranging from 50 μm and 1000 μm (1 mm)). Observing these water transitions from the ground is very difficult because the thick vapour in Earth’s atmosphere almost completely blocks the emission from view.

Improvements in technology and the development of super telescopes offer an increasing gateway to the universe, and planetary insights are moving at rapid pace. We can now detect water transitions in ways that we just could not before. They are best seen from telescopic observatories situated at high-altitude, in extremely dry sites. Such as, the Atacama Large Millimeter Array (ALMA), which is located in the Atacama desert (Chile) at 5000 m above sea level. 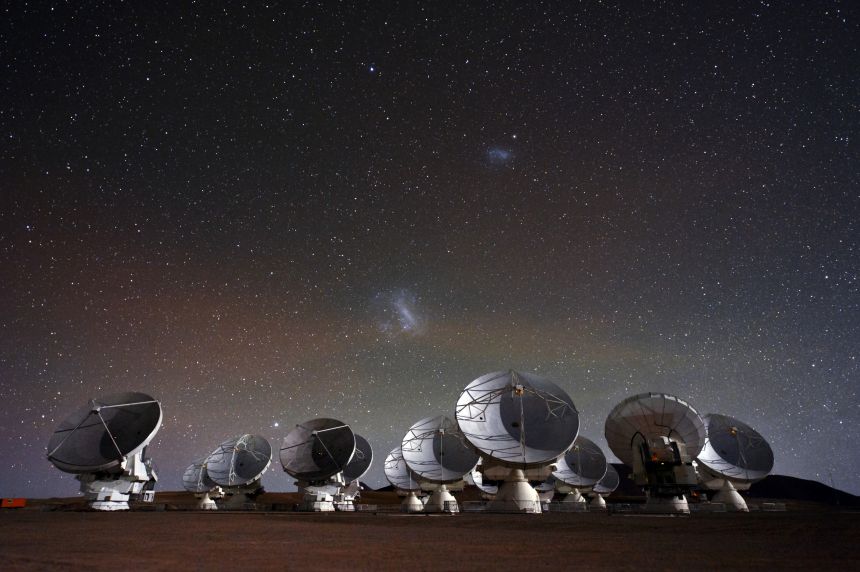 In our study published in Astronomy & Astrophysics, we used ALMA and detected the (670 μm) water transition in space, for the first time. The molecules were spotted in a nearby spiral galaxy (160 million light years away) at a point where the Universe is vastly expanded, and the atmosphere is therefore at its most transparent (red-shifted at 676 μm).

The water vapour emission in this galaxy originates at its core, in its nucleus, where most star formation takes place. To give you an idea of how enormous this galaxy is, the nucleus contains an equivalent amount of water 30 trillion times that of Earth’s oceans combined, and has a diameter 15 million times the distance from Earth to the Sun.

So what sets this water transition apart from others observed in the past? Our analysis revealed that these water molecules intensify their rate of emission when they come into contact with infrared light photons. This increase in activity makes it easier for scientists to observe them. Water molecules are most attracted to photons with specific wavelengths of 79 and 132 μm, which, when absorbed, strengthen the transition’s outline, therefore increasing its visibility. For this reason, this specific water transition has the ability to show us the intensity of the infrared light in the nucleus of galaxies, at spatial scales much smaller than those allowed by direct infrared observations.

Infrared light is produced during events like the growth of supermassive black holes or extreme bursts of star-formation. These events usually occur in extremely dust obscured environments where the optical light is almost completely absorbed by dust grains. The energy absorbed by the grains increases their temperature and they begin to emit thermal radiation in the infrared. Capturing these events can tell us a great deal about how the Universe behaves,  so detecting water transitions that can capture this infrared light, is vital.

Moving forward we plan to observe this water transition in more galaxies where dust blocks all the optical light. This will reveal what hides behind these dust screens and help us to understand how galaxies evolve from star-forming spirals, like the Milky Way, to dead elliptical galaxies where no new stars are formed.

Women in science: A quantum ballerina dancing to the beat of her own drum
Can the theatre change our minds about crime?