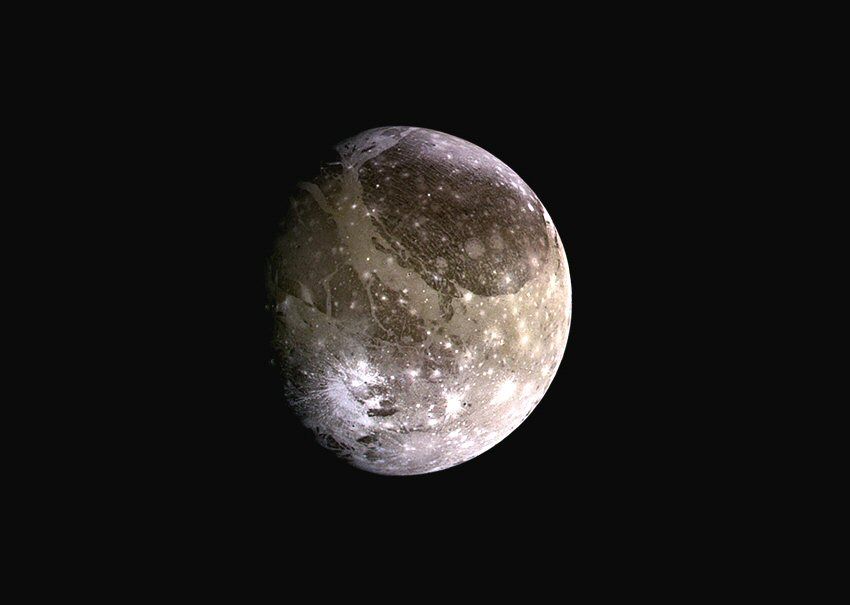 Ganymede as observed by the Galileo spacecraft
Image: NASA

It’s official: it was announced today that Oxford University scientists will help to prepare a mission to Jupiter and its icy moons.

But whilst the JUICE spacecraft will beam back valuable data on several of the planet’s satellites, it will give special attention to one in particular: Ganymede.

I asked Leigh Fletcher of Oxford University’s Department of Physics, one of the JUICE team, about the appeal of Ganymede, what they hope to find there, and how Oxford scientists will probe the secrets of this enigmatic 'waterworld'…

OxSciBlog: What makes Ganymede so interesting?
Leigh Fletcher: When people think of moons in our solar system, they often imagine them as being inferior to the main planets, and somehow less interesting. The moons of Jupiter show how wrong that misguided assumption can be - the four largest Jovian moons (Io, Europa, Ganymede, and Callisto) are the size of planets, and each has a fascinating and rich geologic and chemical history.

These moons truly are worlds in their own right, with a diverse range of unusual landscapes and features that can keep scientists busy for decades. ESA has chosen to focus on Ganymede, the largest example of an icy moon in our solar system. It is thought to be made of roughly equal measures of rocks and water ice, and is likely to harbour a saltwater ocean beneath its icy crust. For those searching for habitable environments in our solar system, the mantra has always been to follow the water, as the vital solvent for the chemical reactions of life.

Ganymede's surface has a mixture of ancient, dark, cratered surfaces, and brighter water-ice-rich regions of ridges. The biggest feature is a dark plain called Galileo Regio, visible from Earth even through amateur telescopes, and may even have polar caps of water frost.  Furthermore, Ganymede has an extremely tenuous oxygen atmosphere, and is the only moon in our solar system with a magnetic field, probably caused by convection within a liquid iron core.

OSB: How does it compare to Jupiter’s other moons?
LF: To better understand Ganymede, it's important to consider the processes which shaped its evolution and surface features by comparing it to the other Galilean moons: although these four worlds of fire and ice probably had the same origins in the Jovian sub-nebula, their present-day structure is the end of product of aeons of subsequent evolution. Jupiter's immense gravity causes tidal flexing of the moons (strongest at Io, weak or absent at Callisto), providing energy to liquefy the water ice crusts and produce internal activity.

Io is mostly rocky, lacking the water ice of the other satellites but featuring hundreds of active volcanoes. Europa is the smallest of the four, with a smooth geologically-young icy surface overlying a water ocean, heated by the tidal flexing from Jupiter. Ganymede's ocean is likely to be deeper than Europa's, under a thicker ice crust. Callisto is further away and experiences less tidal heating, resulting in an ancient terrain, one of the most highly cratered surfaces in the solar system.

OSB: What do we hope JUICE will find out about it?
LF: JUICE will be the first orbiter of an icy moon, and provide a full global characterisation of its surface composition, geology and structure. An ice-penetrating radar will peer through the icy crust for the first time, providing us with our first access to the water ocean of a Galilean moon. Our key goal is to assess the potential habitability of Ganymede as a representative of a whole class of ‘waterworlds’ which may exist around other stars, building upon the discoveries of habitable environments on the Earth's deep ocean ridges.

So JUICE will be looking for key characteristics of habitability on Ganymede - sources of energy, access to crucial chemical elements, liquid water, and stable conditions over long periods of time.

It's a crucial step in our reconnaissance and exploration of our solar system, and towards answering the question of 'What are the necessary conditions that make a planetary body habitable?’ By comparing the three potentially ocean-bearing Galilean moons, we hope to identify the physical and chemical characteristics driving the evolution of this planetary system.

JUICE will study the extent of Ganymede's ocean, its connection to the deep interior and ice shell; the global distribution and evolution of surface materials, geologic features, and present-day surface activity; and the interaction with the local environment and magnetosphere. In addition, JUICE will explore recent activity and composition on Europa, and characterise Callisto as a remnant of the early Jovian system. Finally, JUICE will be capable of exploring the wider Jovian system, from the complex and dynamic Jovian atmosphere, the magnetosphere, the minor satellites and rings.

OSB: What instruments will be needed to study it?
LF: The proposed JUICE payload has cameras to take images of the icy moon surfaces and swirling Jovian clouds; spectrometers covering ultraviolet, near-infrared and sub-millimetre wavelengths to determine moon compositions and temperatures, winds, composition and cloud characteristics on Jupiter; a magnetometer and plasma instruments to conduct an investigation of Jupiter's magnetosphere; and a laser altimeter, ice-penetrating radar and radio science instrument to probe below the surface of the Galilean moons and through the Jovian cloud decks.

The payload is just a model right now, and other instruments could be added. All this will be launched on a 5 tonne spacecraft in 2022, with solar arrays to provide power and a large high-gain antenna to return the data to Earth. It will take 7.5 years to reach the giant planet, before going into orbit around Jupiter to conduct an extensive survey of the whole planetary system. Then, in the final phase in 2032, it will enter orbit around Ganymede.

OSB: How are Oxford scientists likely to contribute?
LF: Oxford has a strong heritage of contributing instrumentation and data analysis techniques for outer solar system missions, notably with the near infrared mapping spectrometer (NIMS) on Galileo and the composite infrared spectrometer (CIRS) on Cassini.

We also have a long-term campaign of giant planet studies from ground-based observatories in Hawaii and Chile and space-borne telescopes (Spitzer, Herschel, Hubble). This has allowed us to contribute to the science case for a return mission to Jupiter and its icy moons, identifying the key questions and mysteries left unanswered by previous generations of spacecraft.

Oxford, along with many other UK institutions, will hope to contribute instrumentation to fly to Jupiter to address some of these questions. Involvement with Galileo and Cassini enabled Oxford to build up a rich planetary science group, with a broad range of experience from lab spectroscopy to spacecraft hardware, and from icy moons to gas giant dynamics. This expertise will help us to solve the challenges of the JUICE mission.

OSB: What is the next big milestone for the JUICE mission?
LF: Now that the mission has been officially selected by ESA as the L-class mission for 2022, the hard work really begins. Industry will be invited to design and build the spacecraft systems, and an announcement of opportunity will be issued to call for instrument designs. Teams will be assembled to thrash out ideas for instruments that address key scientific questions, all hoping to see their particular design on the launch pad when we lift off for Jupiter in a decade's time.

The final go-ahead for the mission from ESA, known as 'adoption', should come in the next 2-3 years.