Changes to their habitat are affecting the clouded leopard population on Malaysian Borneo.

A new study led by Oxford scientists has produced the first robust estimate of the number of Sunda clouded leopards remaining in the state of Sabah, Malaysian Borneo.

The research also explores how changes to Sabah's forest landscape may be affecting these threatened wild cats.

The study, led by researchers from Oxford’s Wildlife Conservation Research Unit (WildCRU) in collaboration with partners from the Universiti Malaysia Sabah, Danau Girang Field Centre (DGFC), Sabah Wildlife Department and Panthera, provides the first evidence that the population density of the Sunda clouded leopard is negatively affected by hunting pressure and forest fragmentation.

The research, published in the journal Oryx, also had some positive news, showing that clouded leopards can persist after a forest is logged and that their numbers may increase over time as the forest begins to recover.

Dr Andrew Hearn from WildCRU, first author of the paper, said: 'For six years, we conducted intensive camera-trap surveys of eight protected areas in Sabah. We used the cloud-shaped markings on the coat of the animal and morphology to identify and sex individual animals and used sophisticated statistical methods to estimate their population density in different forest areas across Sabah. We also analysed our camera-trap data to provide an estimate of poaching pressure for each study area.

'We found evidence of poaching activity in all forest areas, with the lowest detection rates being in Danum and the highest in Kinabatangan. We finally estimated the size of the population of the Sunda clouded leopard to be around 750 individuals in Sabah.' 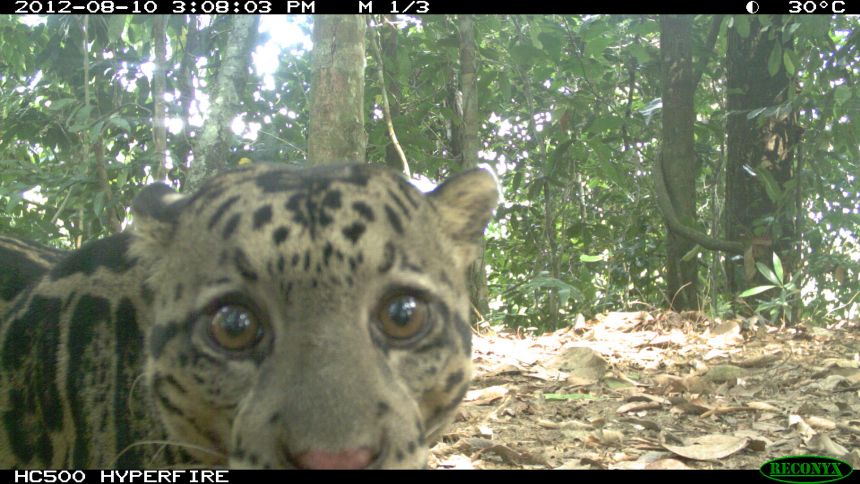 DGFC director Dr Benoit Goossens, a co-author of the study, said he hoped the results of the study, together with the action plan for the Sunda clouded leopard being launched next year, will help to manage the species in Sabah's forests. He added: 'The fact that selectively logged forests provide an important resource for Sunda clouded leopards suggests that appropriate management of these commercial forests could further enhance their conservation value. But the overriding priority for our wildlife managers is to reduce poaching pressure, both on these felids and their prey, by reducing access to the forest interior along logging roads and by increasing enforcement patrols at strategic areas.'

Professor David Macdonald, Director of WildCRU, said: 'Clouded leopards are stunningly beautiful, and as denizens of some of the most threatened forests in the world they have the potential to be iconic symbols for conservation: our findings are a big step on that road.'

Luke Hunter, President and Chief Conservation Officer at Panthera, said: 'The clouded leopard is the top cat of Sabah, playing a similar role as tigers or leopards in continental Asia. Sadly, just as for tigers and leopards elsewhere, clouded leopards are targeted by poachers. Our work emphasises yet again how saving big cats and their prey relies on strong protection and robust anti-poaching measures.'

The research was primarily funded by the Darwin Initiative, the Recanati-Kaplan Foundation, the Robertson Foundation and the Sime Darby Foundation.

What can we all do to fight climate change in today's political climate?
Recording the history of malaria in Africa