Cancer requires a blood supply to deliver the nutrients and oxygen it needs to grow and survive. It had been thought that tumours create the blood supply they need by stimulating the formation of new blood vessels, a process called angiogenesis.

But this no longer appears to be the only process going on. Some tumours seem to acquire their blood supply by taking over existing blood vessels, co-opting them for their cancerous growth.

Oxford Science Blog caught up with histopathologist Professor Francesco Pezella of the Radcliffe Department of Medicine at the University of Oxford, who has been establishing the role of blood vessel co-option in lung cancer. His group is now seeking to understand the process and says it could offer new avenues for cancer drug development, and has recently published a commentary on the topic in the Journal of Pathology.

Oxford Science Blog: What is angiogenesis and why is it important in cancer growth?
Francesco Pezzella: The term angiogenesis was first recorded in 1787 and describes the formation of new blood vessels from pre-existing ones. In 1971 Judah Folkman introduced the hypothesis that tumour growth is strictly dependent on this phenomenon because, in his own words, 'Once a tumour take has occurred, every increase in tumour cell population must be preceded by an increase in new capillaries converging on the tumour'. Eventually 'inducing angiogenesis' became considered as one of the hallmarks of cancer, as it was assumed that all the tumours could only grow if they were able to induce formation of new blood vessels.

OSB: New cancer drugs have targeted the growth of new blood vessels. How have they fared?
FP: Not well! In the mid-1990s there were high hopes that these drugs would have produced a quantum leap in the treatment of all the types of tumours. The idea was that by inhibiting the formation of new vessels, all tumours would simply die or, at least, enter a quiescent state. The high expectations of the time are shown in an interview James Watson gave in 1998, when he declared that 'Judah (Folkman) is going to cure cancer in two years'.

While some benefits have indeed been observed, these have occurred only in a subset of cancers and have been modest. More worryingly, both in some animal models and human trials, progression of tumours during anti-angiogenic treatment has sometimes led to a poorer outcome being observed.

OSB: What has your research shown instead?
FP: We were as enthusiastic about angiogenesis as everybody else. However, as soon as we entered the field in 1996, our group discovered that a type of lung cancer called non small cell lung carcinoma could grow in humans without inducing any angiogenesis, and that this was also the case in advanced metastatic disease.

Our observations were in complete contrast to the accepted wisdom of the time: tumours behaving like this were just not supposed to exist.

The tumours we identified still have a blood supply, but this is obtained by exploiting, or co-opting, pre-existing blood vessels. These tumours therefore have an underlying biology which is different from that of angiogenic malignancies.

It had been accepted as a general rule that, as a tumour outgrows its blood supply, it starts to receive less oxygen and therefore pathways leading to the formation of new vessels are activated.

Instead, the tumours we described – despite having lower levels of oxygen – are not inducing any new blood vessel formation. They are responding to the diminished availability of oxygen in a different way that we still do not fully understand, but it is potentially linked to a re-programming of the way in which the cancer cells produce energy. 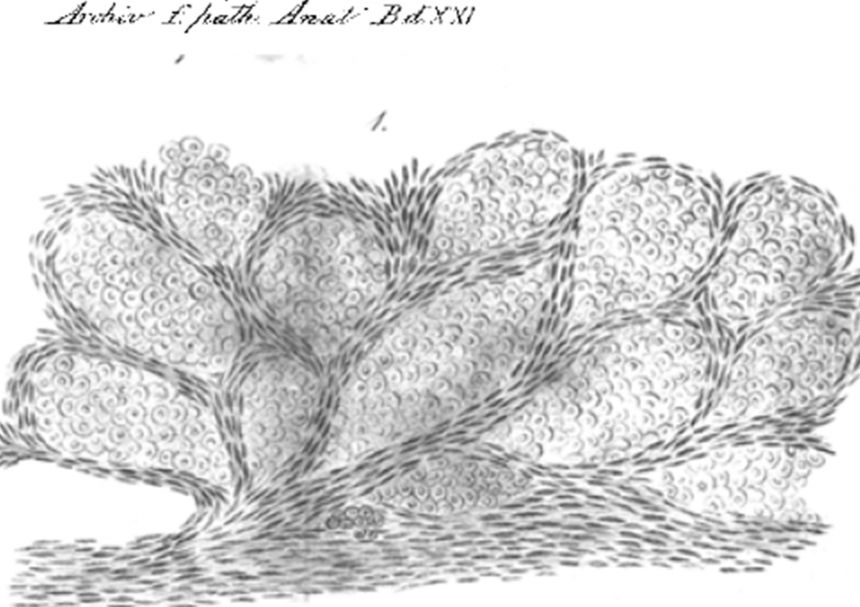 Camera lucida drawing from 1861 showing cancer cells growing inside lung alveolar spaces
Interestingly enough, we realised by extensively reading the literature that other histopathologists before us had suggested that some tumours can grow using pre-existing blood vessels. In a 1934 textbook, Rupert Wills described the growth of metastatic aggressive tumours in the lung according to a pattern he called 'intra alveolar growth'. Thanks to his superb illustrations, we have realised that these are actually non-angiogenic tumours. Wills also credits, as first description of this type of growth, a paper published in a 1861 issue of Virchows Archiv which contains a camera lucida drawing of what appears, once again, to be a tumour exploiting the lung’s normal blood vessels.

However these histopathological observations have been widely ignored in favour of data from animal models, which had pointed to an absolutely essential role for angiogenesis in cancer.

OSB: Do different types of cancers, or at different stages, maintain their blood vessel supply in different ways?
FP: Yes, a primary angiogenic tumour can relapse years later as a non-angiogenic tumour, and vice versa. Even within the same tumour there can be areas attracting new vessels and areas exploiting pre-existing ones. This is actually a rather common scenario.

OSB: What are the next steps in your research/what are the open questions we now should explore?
FP: There are now two main key questions to be answered:

1) Why in some cancers is there no angiogenesis, and how can a tumour switch from angiogenic to non-angiogenic status and vice versa? Recently animal models for non-angiogenic growth have become available and they are allowing us to start to tackle the problem by mapping the pathways involved. Once we have a clearer idea of the pathways involved, we can identify the molecular mechanisms at work by trying to switch the cells from one status to another.

2) How do cancer cells co-opt blood vessels? Only a few studies have so far addressed this issue, but already we know that is a promising field because, by understanding which proteins are mediating this process, we can think about disrupting vascular co-option with drugs. This approach could deliver some useful treatments. Furthermore there are clues suggesting that the blood vessels co-opted by the tumour start to express proteins which they normally would not produce, making them different from other, normal blood vessels and therefore a possible target for treatment.

OSB: What does this all mean for new cancer treatments?
FP: Our observations explain some of the poor results observed with drugs directed only against angiogenesis. But while we have put aside forever the idea of a magic bullet able to kill all new blood vessels and cure cancer, we have also unveiled potential targets for new treatments.

The discovery that cancer cells can survive by co-opting vessels opens an opportunity to test compounds and therapeutic antibodies able to block the co-option, and a few first candidates to target with drugs are already emerging.

Although we cannot be as optimistic as James Watson was in 1998, we think that the more complete picture we are getting of the interaction between cancer cells and blood vessels is likely to deliver some improvement in treatment in the future by targeting both angiogenesis and taking over of existing vessels.