Illuminated sign in hospital warning about radiotherapy equipment in use

The underlying principle of radiotherapy is using shaped beams of high energy light or particles to induce cell death in tumour cells, whilst sparing healthy cells. Radiotherapy can be incredibly effective, and is increasingly used in both a curative and palliative capacity to kill or control tumour growth, either alone or in conjunction with chemotherapy. It's a growing method, with up to 60% of cancer patients receiving radiotherapy in the course of treatment.

Oxygen plays a surprisingly large role in tumour evolution and treatment; it is vital for growth and replication of cells. While this might tempt one to think that one can simply starve a tumour of oxygen, this is not the case – oxygen deficient tumours create chaotic networks of blood vessels to sustain themselves, and too frequently acquire a suite of dangerous skills in a low oxygen environment, such as the capacity for metastasis; the spreading of cancer to other parts of the body. Consequently, tumours bereft of oxygen have a markedly worse prognosis, a fact known since the 1950s through research by pioneering medical physicist Hal Gray (see sidebar).

Such is Hal Gray’s influence on the field that his name has been lent not only to the unit of radiation dose the Gray (Gy, Energy per kilogram) but also to the eponymous Gray Institute, which has been based in Oxford since 2008 as part of the Cancer Research UK Oxford centre. Fittingly, the authors of the work here, Dr. David Robert Grimes and Dr. Mike Partridge, are affiliated with the Gray Institute.

Oxygen plays a substantial role in radiotherapy too, with well oxygenated regions of tumour responding by up to a factor of three better than those segments bereft of oxygen. This effect is known clinically as the Oxygen Enhancement Ratio (OER), and oxygenated tumours prove much easier to treat than their anoxic counterparts. The OER curve (below) is unusual in several respects; instead of increasing linearly, the curve rapidly saturates, obtaining half maximum radio-sensitivity somewhere around an oxygen partial pressure of 3 mmHg with maximum OER typically achieved at partial pressures p > 20 mmHg with subsequent increases not significantly modifying the curve. This distinct curve is seen across all sorts of cells lines with huge variation in biology, from human to yeast and bacteria – suggesting perhaps a chemical culprit behind this useful boost. 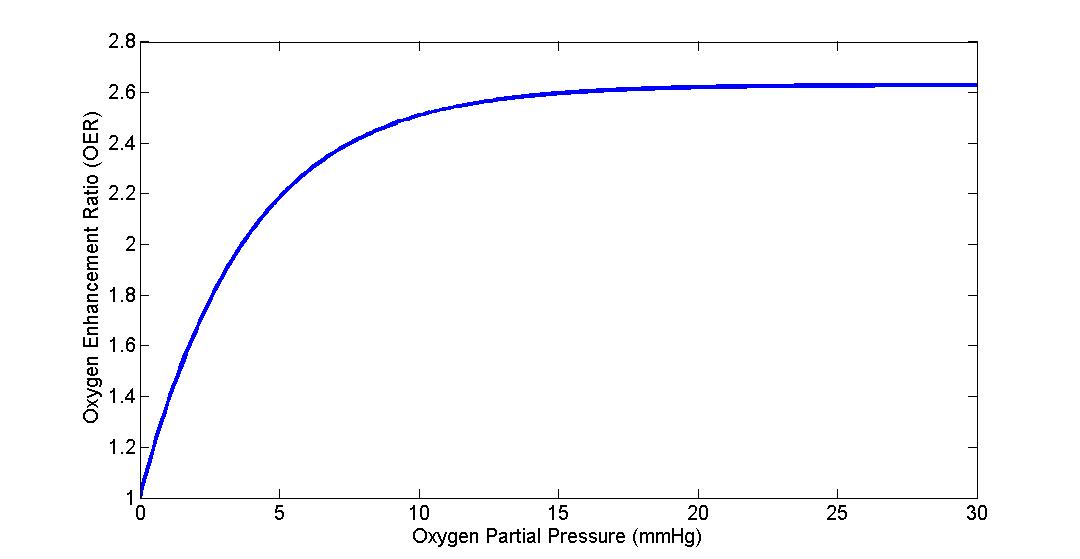 One idea posited to explain this curious result is the oxygen fixation hypothesis. In X-ray therapy, particles of high frequency light are directed at a tumour site. Most of these photons pass through the patient unperturbed, but a significant amount interact with particles in the patient. When a photon does interact, it can create high energy electrons which might impinge upon a target such as the water molecules we contain in abundance. An impacted water molecule loses a proton and becomes a hydroxyl radical. Radicals are highly chemically unstable and extremely reactive - when they encounter DNA, they have the tendency to damage it. This kind of damage is common, and is in general readily chemically repairable, allowing damaged DNA to be restored and cell kill averted. This acts to make radiotherapy less effective, as tumour cells could recover from radiation damage and survive. However, if the radical reacts with oxygen prior to the collision, if forms a new type of radical called a peroxy radical that is difficult or impossible to chemically repair, 'fixing' DNA into a permanent irreparable state. As a consequence, the theory suggests that oxygen is a potent way to make cancers more sensitive to radiotherapy because radical species formed with oxygen are far more difficult for DNA to chemically repair, increasing the lethality of interactions. This concept is illustrated below. 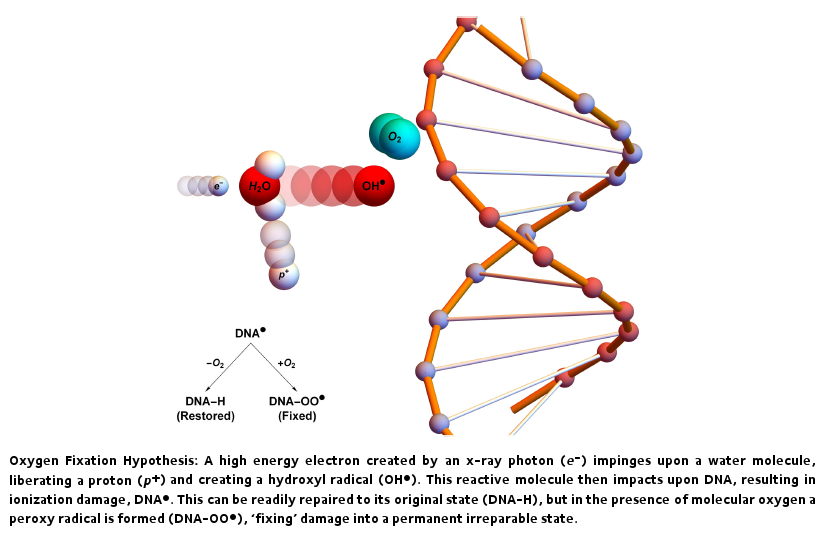 While oxygen fixation is commonly accepted as the mechanism behind the oxygen effect, there has been relatively little work on the fundamental physics underpinning oxygen interaction, nor on the physical parameters that might allow modification of this effect. Up until now, mathematical descriptions of OER have tended to be phenomenological and empirical, capturing the gross behaviour of the curve but not the underlying mechanisms that make it so. This is of course useful, but leaves much unanswered. This curious unknown captured the attention of my colleague Dr Mike Partridge and myself. Indeed, it seemed especially relevant to us, as physicists at Oxford have been working on ways to improve the effectiveness of radiotherapy through a wide variety of methods, including studying the role of oxygen in both cancer prognosis and treatment. We ourselves have published quite a bit on oxygen dynamics before [1,2] , and given the importance of radiotherapy in modern cancer treatment, we were intrigued by not only what factors influence OER but also what parameters might be varied to better understand this oxygen boost to treatment efficacy.

In our new paper published in the Institute of Physics journal Biomedical Physics and Engineering Express [3], we explore the origins of the oxygen effect , describing and predicting the OER curve from first principles. This work establishes  a mechanistic explanation of the OER curve from physical first principle, and helps shed light on all the fascinating processes that lead to this marked effect. Our model combines a range of physical considerations from statistical mechanics and kinetic theory, from the thermal velocity and mean-free path length of oxygen molecules to the interaction probability of radicals and DNA. This model was compared to classic experiments on the oxygen enhancement effects, and the results found to agree well with observed experimental data. The conclusions of this work strongly support the idea that oxygen fixation with radicals is indeed the mechanism which gives rise to the observed clinical effect. Our theory also suggests that while most of the vital parameters are fixed constants of nature and impossible to modify, there is a small thermal effect which may exist, though it is not likely to be clinically exploitable.