You're in hospital and you need to have a blood test: What do you think would reduce your pain?

You probably went with option 2. But in babies option 1 is often prescribed.

Ultimately, we would like to provide better pain relief for some of the most vulnerable patients in hospital.

It is difficult to test whether painkillers work for very young children and we often don't know the best dose to give. But if Professor Rebeccah Slater and her research team at Oxford are successful we may find alternative ways to measure pain in babies and may eventually be able to offer babies some better options to soothe their pain.

Their latest research, published in Current Biology and led by Caroline Hartley and Fiona Moultrie, looks at how babies who have been born early respond when a blood sample is taken from the heel of their foot.

Premature babies have to undergo various procedures, including regular blood tests. So, with the support of parents and working with the charity SSNAP, babies were recruited to the study and the team were able to measure both brain activity and reflex responses during this painful procedure.

Dr Hartley said: 'The youngest babies have disorganised and exaggerated motor responses when painful procedures are performed. For example, they might pull away both feet even when the blood test is performed on just one foot.

'As they get older, these reflex movements become quicker, shorter and smaller. They respond faster but don't pull away as much. However, you cannot directly infer how much pain a baby is experiencing from these responses – for example a premature baby can withdraw both their legs even in response to a light touch.

In the study the babies' brain activity was also measured by placing electrodes on their heads prior to the blood tests – this technique is called EEG (electroencephalography).

'Considering both measures together, we found that older babies with more mature brain activity had more refined reflexes. ' 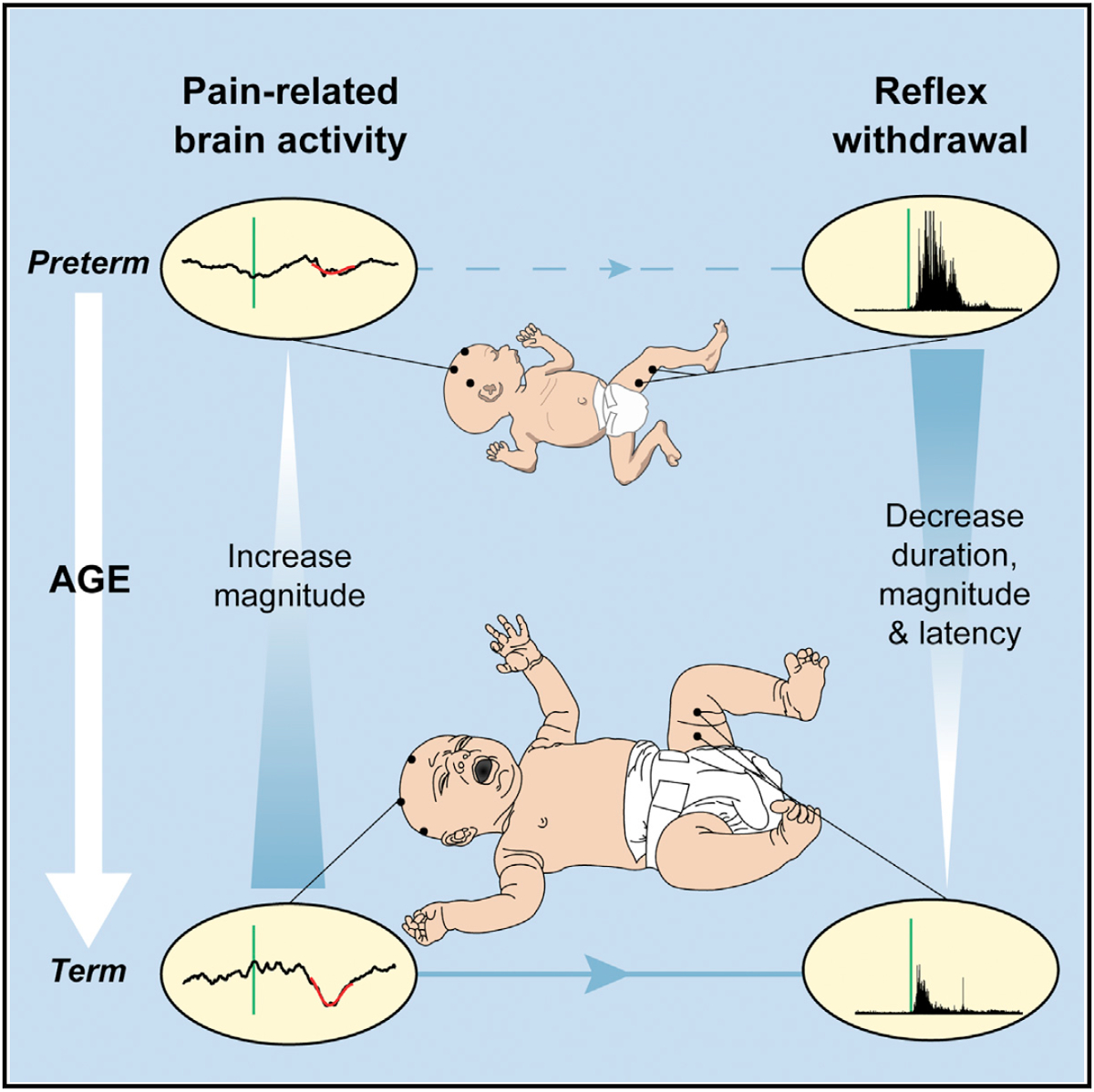 This study suggests that top-down inhibitory mechanisms may begin to emerge during early infancy.  As adults, we may instinctively stop ourselves from pulling our hand away from the handle of a hot pan if the alternative would be to tip boiling water everywhere, a potentially more dangerous result: that's an example of top down inhibition. The observation that, as the babies get older, more mature brain activity is related to more refined reflex activity, suggests that these inhibitory mechanisms may begin to play a role.

Professor Slater explained the context of the research:  'Previous research in animals, which has been pioneered by colleagues at UCL, has shown that top-down inhibitory mechanisms develop in early life. Our results suggest that this research can be translated into humans.

'The results are also relevant to medical practice: doctors and nurses rely on behavioural observation to make judgements about pain in babies. Our results show that the movements of a premature baby in response to a painful procedure may not be proportionate to the amount of information that is being transmitted to the brain.

'That is also critical if we are trying to develop effective pain relief for babies. If we understand better how the immature brain processes information about pain, we may be able to use these patterns of brain activity to see whether different types of pain relief are effective in babies.'

Her next study, starting in September 2016 will test that. The team will measure brain activity and reflex withdrawal activity in a randomised controlled trial investigating whether morphine provides effective pain relief during clinically essential medical procedures.

Professor Slater said: 'Ultimately, we would like to provide better pain relief for some of the most vulnerable patients in hospital.'

Video: Academic searches for the real Tolkien in an unbroadcast interview
The man who designed England’s green and pleasant land