Life reconstruction of a polypterid.

Oxford researchers have conducted a new analysis which reveals a surprising twist in the tale of how fish evolved.

The ray-finned fishes are the most numerous group of backboned animals. There are tens of thousands of different ray-finned species, from angelfish to zebrafish, making up 99% of all species of fish, and 50% of all vertebrates. They are useful to humans as a source of food, and sometimes even as pets, but they are also our distant cousins. We share a common ancestor, deep in evolutionary history. We know a lot about how the other major group of vertebrates, lobe-finned fishes, evolved as they began to move onto dry land, giving rise to birds, reptiles, amphibians and mammals, including humans. However, the early evolution of the ray-finned fishes’ side of the family tree is not so well understood.

Now, an international team including researchers from Oxford University’s Department of Earth Sciences have discovered a new piece of the puzzle. They looked at polypterids, bizarre fish which live in African freshwaters. Led by Dr Sam Giles from the University of Oxford, they used CT scanning to take a fresh look at the ancestors of modern polypterids, fossilised 250 million years ago.

Although polypterids are technically ray-finned fish, they have a curious combination of features, including thick scales, lungs and fleshy fins, which make them look very ancient - they have been referred to as “dinosaur fish”. They are so strange that scientists didn’t work out that they were ray-finned fish for more than a century after they were discovered. The polypterids seem to be out of place in time, more primitive in evolutionary terms than fossilised ray-finned fish from millions of years ago. 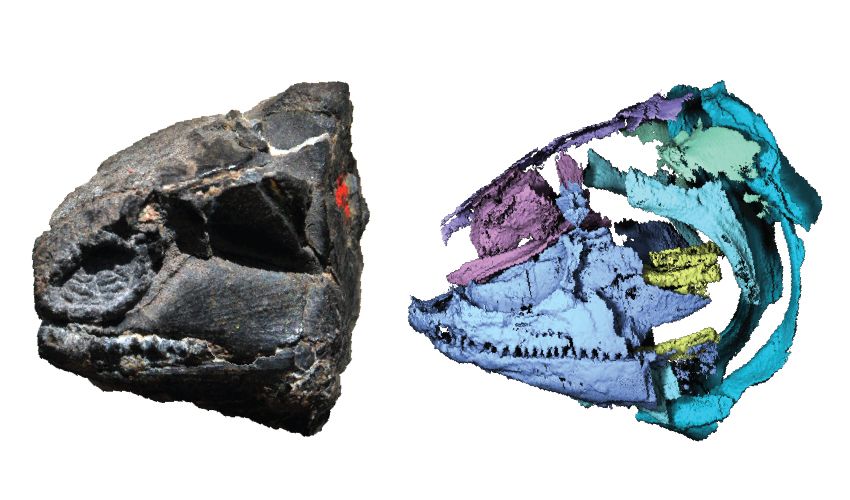 However, the researchers discovered that the “dinosaur fish” aren’t as primitive as they seem. Looking at modern polypterids alongside fossils of their ancestors, it appears that, in fact, they developed some of their odd characteristics later in time.

“Polypterids appear to have undergone several reversals in their evolution, which has clouded the view of their position in the fish family tree,” Dr Giles explained. “It’s as if your brand-new smartphone came with a rotary dialler and without Wi-Fi; we know it’s the latest handset, but its characteristics might lead us to think it’s an older model.”

Now we understand these outwardly “primitive” characteristics for what they were, the polypterids, and their position in the lineage of ray-finned fish, start to make more sense.

“With this new analysis, we were able to iron out a lot of the wrinkles in our understanding of the sequence of evolutionary events,” Dr Giles reflected. “These results change our understanding of when the largest living group of vertebrates evolved, and tell us that ray-finned fishes dominated the seas following a major mass extinction that eradicated their closest rivals.”

“Analyses like these are powerful tools, and go to show that palaeontology doesn’t always rely on the discovery of new fossils; re-examination of old fossils using new techniques is just as important for revitalising our understanding of vertebrate evolution.”

From nanotech research to tortoise racing: photographing Oxford
Breathing with your Brain