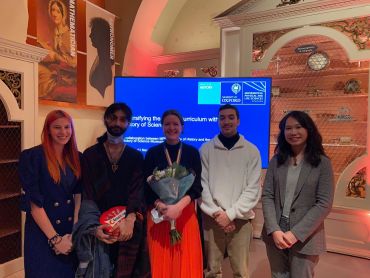 The four of the five undergraduate students from different universities who participating in the internship across five STEM-based subjects.
A set of major collaborations between science, mathematics and history staff and students at the University of Oxford - seeking to diversify the curriculum in STEM (science, technology, engineering and mathematics) disciplines - was launched last week.

The Diversifying STEM Curriculum project has created a unique and original collection of online materials engaging with some significant issues currently discussed in higher education and wider society.

The material reflects upon key scientific concepts and research and places them into wider historical contexts than has been the norm. In particular it highlights diverse contributions that have previously not been given the recognition they deserve including: ethnicity, gender, nationality, sexual orientation, disability, class and religion.

Jo Knights from Equality, Diversity and Inclusion team at the Mathematical, Physical and Life Sciences (MPLS) Division, said:  ‘Each research project explores specific issues within their subject curricula to broaden the global historical and social context to scientific research, to give agency to scientists who have not been appropriately recognised, and to provide lecturers, researchers, students – anyone who is interested in diversifying their curricula – the content and research to integrate these projects into their teaching and learning.’

The projects aim to support the cultural shift towards a STEM curriculum that embraces an interconnected global view of sciences and maths, one that includes a diverse range of people and a more inclusive historical context.

The inaugural Diversifying STEM Curriculum project began in the summer of 2021, with five undergraduate students from different universities participating in a two-month internship across five STEM-based subjects at the University of Oxford. The students picked their own research topics and developed their final projects in collaboration with each other and their supervisors. The projects include:

By focusing on science as a process, I want to demonstrate how information builds and develops, and how it is communicated across cultures. I especially wanted to highlight the importance of agency, as oftentimes the narratives I’d heard would give agency to European scientists, but less so to people from other communities. I’ve chosen to discuss the world’s most consumed psychoactive drug: caffeine. Specifically, this project centres around coffee and yerba mate: two plants with seemingly opposing stories.

Mathematical history has brought out narratives about science that often focus on the singular, brilliant scientist, in most cases male and European,.... despite the ways in which the historical narrative is presented to the public, the evolution of mathematics is hardly as straightforward and linear as it may seem to be.

My project seeks to provide a decolonialist account of South Asian science by interrogating the scientific-historical environment of colonial India at the time of its acceptance into western scientific spheres in the mid-20th century.’

‘Teaching of mathematical history has brought out narratives about science that often focus on the singular, brilliant scientist, in most cases male and European, who makes substantial contributions through their innate genius. However, despite the ways in which the historical narrative is presented to the public, the evolution of mathematics is hardly as straightforward and linear as it may seem to be. We must therefore begin our delving into this history of mathematics as an attempt to unveil our own cultural prejudices.’

‘Named reactions are a very useful tool in organic chemistry and their importance became evident as their number increased through time.  However, they are becoming increasingly controversial. One of the major issue arising is that at least half of the population was blatantly forgotten in the naming process: women. I am highlighting the origins behind the limited number of reactions named after women in the first thirty years of the 20th century and celebrating the achievement of women pioneers in organic chemistry in Europe.’

One of the major issue arising is that at least half of the population was blatantly forgotten in the naming process: women.

Engineering has developed rapidly in the UK and has been one of the main engines of the UK economy. But it is obvious that the gender imbalance in engineering is relatively high, compared with other industries. In 2016, women only accounted for 21% of the engineering workforce, comparing with 47% in all industries on average. I’m investigating how gender equality was improved in the past, and if there are any lessons learnt which can improve gender equality at the present. I’m looking particularly at the inter-war years because women engineers started to realise the importance of gender equality and took various approaches to promote women’s status in engineering.’

The Departments of Chemistry, Engineering Science, Maths, Physics and Zoology have partnered with the Faculty of History and the History of Science Museum for these projects. Funding has been received from the Vice Chancellor's Diversity Fund.

See all the projects here: https://www.mpls.ox.ac.uk/equality-and-diversity/diversifying-stem-curriculum-projects-2021