Diagram by Florence Nightingale from Harriet Martineau, England and Her Soldiers, London, 1859.

Whatever Hollywood might say, AI is not all about killer robots in a far off future. It is more mundane, more everyday - and much more ubiquitous. And thinking it just belongs in a sci-fi film is dangerous, since this leads to a sense it is not relevant or that it is even unreal. Professor Ursula Martin bristles slightly at the very idea of robots, killer or otherwise, and points out that everyone’s lives are already affected by AI – and there are ‘bigger things at play’ than people realise.

The Maths professor and computer expert has put together a fascinating exhibition in the Bodleian  about the history of AI – and has raided Oxford’s collections  for treasures which showcase thinking about AI,  illustrate fundamental ideas, and  provoke debate.

AI is very useful. It’s all around us...It is changing our lives...Making...AI all about killer robots gets us off the hook of taking responsibility and distracts attention from the more everyday reality of AI

Victor Frankenstein played God, she says, and Mary Shelley’s manuscript still has the power to shock. In the exhibition, it is open at the page where 'by the glimmer of the half-extinguished light' Frankenstein sees for the first time 'the dull yellow eye' of the creature he has created in his laboratory.  Another exhibit is Ada Lovelace, describing Charles Babbage’s calculating machines. She places them in a contemporary theological debate: did the the creator of the machines challenge God, or merely help us  to understand His works better?

Meanwhile, Ramon Lull’s colourful medieval diagrams present simple reasoning as an almost mystical process. But, for the 19th century economist Stanley Jevons, the goal was more mundane. His 'Logic Piano', a construction of ivory, wood, wire, showed, in principle, it was possible to mechanise human reason itself. 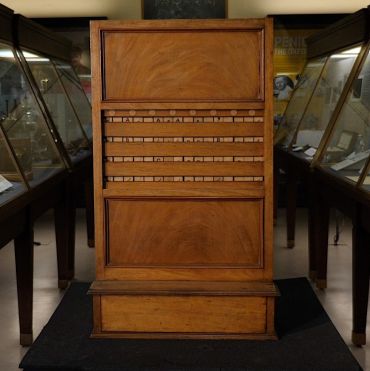 The logic piano
Today’s AI can produce huge mathematical proofs built up by  similar chains of reasoning. But it cannot yet explain them, as a human mathematician could.

Jonathan Swift, meanwhile, imagined a machine that could write a book on any topic ‘without the least assistance from genius or study’. And, in the early days of the computer, Christopher Strachey experimented with simple computer generated love-poems: the fore-runner of today’s AI software. It can mine millions of existing texts and 'learn' rules to create 'plausible' new texts about  any given topic.  Strachey’s programme used a very restricted vocabulary, which gave the poems an oddly prim and stilted tone.

Similarly, it is all too easy for modern AI to reflect biases in the texts it has learned from, propagating and amplifying those biases.

Professor Martin points out, to deliver  modern AI involves vast quantities of data, and fast computers that use clever algorithms, not just for calculation, but to reason and  find patterns too. Looking at early examples, such as Strachey’s poems, shows just how straightforward some of the underlying ideas are.  According to Wadham College-based Professor Martin, it is the scale of the data and the power of the computation that transforms these simple ideas into present-day AI. Understanding them in context can give us new ways to think about contemporary concerns as well.

Professor Martin and the team
She says, take for example Florence Nightingale’s 'Rose diagram', what we would now call a 'data visualisation',  of  hospital  deaths during the 19th century British campaign in the Crimea. It demonstrates that most deaths were due to infection, and is based on data painstakingly collected and analysed by hand. Such techniques were, and are,  widespread in the British government and armed forces, and some of the underlying assumptions that shaped how the data was collected and used, have had long-lasting consequences.

‘There are so many stories you can tell from the Bodleian archives,’ Professor Martin says enthusiastically. ‘We’re trying to tell the history of AI here in 15 objects.'

So it is emphatically not all killer robots. Professor Martin adds, ‘AI is very useful. It’s all around us, for example your phone or your satnav or your bank are full of AI. It is changing our lives, and both as individuals and as society as a whole we need to think and act responsibly, just as we should with any other technology. Making conversations about AI all about killer robots gets us off the hook of taking responsibility and distracts attention from the more everyday reality of AI.’