Credit: Shutterstock. Today we take for granted that sound is spatial, and that hearing is spatial: that it is possible to hear where sounds come from and how far or close they are.

Contemporary art is replete with works which explore the relationships between sound and space, with ‘space’ understood in physical, sensorial, geographical, social, and political terms.

Today, I can plug my headphones into the façade of a building in Berlin called BUG, to hear how its materiality, made audible through the use of seismic sensors in the building’s infrastructure, changes over time and in response to atmospheric variations, weather and other environmental factors. In other words, I can listen to a building as it evolves over time and in relation to its surroundings.

In suburban London, I can visit Vex, a building whose spiralling form is inspired by the music of Erik Satie and the methods of John Cage.

Electronic music, projected over loudspeakers, is played throughout the building. It is created from sounds recorded during the making of the building itself: the sounds of breaking ground, of pouring concrete. This literal musique concrète is lush and surprisingly beautiful. It is impossible to say where music begins and architecture ends.

In 2017, I could visit Silent Room, an acoustic refuge in a low- income neighbourhood in Beirut. This temporary structure, erected in a parking lot close to a highway, used acoustic panelling to reduce environmental noise, but it also featured a quiet, meditative soundtrack composed of everyday city sounds. The designer wanted to draw attention to the uneven ways in which noise affects rich and poor inhabitants of the city - how a politics of noise shapes the city and differently impacts upon the lives of its residents. 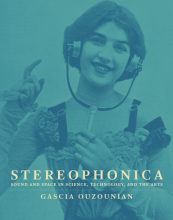 While these particular projects are formed at the intersection of music, art, architecture and urban design, many others take the form of sound recordings, compositions, performances, films, installations, sculptures, radio works, websites, and much more.

Today, I can take a listening tour of Bonn, following a map of unique acoustic features of the city created by Bonn’s ‘City Sound Artist’ in 2010. Or, I can take an ‘electrical walk’ in any number of cities while wearing specially designed headphones which make audible normally inaudible elements of urban infrastructure. During my walk, formerly silent objects such as surveillance cameras, ATMs, and transportation infrastructures, beat and resonate with the pulses and tones of electromagnetic energy.

Despite this striking profusion of creative work and research that takes place at the intersection of sound and space, our historical understanding of how sound came to be understood as spatial remains lacking. Today we take for granted that sound is spatial, and that hearing is spatial: that it is possible to hear where sounds come from and how far or close they are.

Today we take for granted that sound is spatial, and that hearing is spatial: that it is possible to hear where sounds come from and how far or close they are

However, as recently as 1900, a popular scientific view held that sound itself could not relay ‘spatial attributes’, and that the human ear had physiological limitations which prevented it from receiving spatial information. Many psychologists believed it was through reasoning, or visual or haptic sensations, that an ‘auditory space’ was constructed.

In order to explore such striking shifts in perspective, Stereophonica: Sound and Space in Science, Technology, and the Arts (MIT Press) traces a history of thought and practice related to acoustic and auditory spatiality as they emerge in connection to such fields as philosophy, physics, physiology, psychology, music, architecture, and urban studies.

My discussion begins in the 19th century, when scientists began systematically  to study the physiology and psychology of spatial hearing. It extends to the present day, when sound artists seek to reconfigure entire cities through sound, and the concept of ‘sonic urbanism’ circulates within and across the worlds of architecture, urban studies and sound studies. Rather than trace a linear trajectory through any one historical route, I revisit a series of historical episodes in which the understanding of sound and space were transformed:

Each of these phenomena represents a distinct shift in how sound is created, experienced or understood in relation to space. Further, each sheds light upon evolving acoustic and auditory cultures, ways of listening, and changing ontologies of sound and space.

My aim is to cut into and across normally distinct histories, in order to show how various conceptions of acoustic and auditory spatiality have evolved over time and in connection to one another

By focusing on such transformative episodes, whether they last several years or several decades, my aim in Stereophonica is to set into dialogue various realms of thought and practice that bear upon contemporary ideas of acoustic and auditory spatiality, but that are normally kept distinct within such disciplines as philosophy, physics, engineering, music, and urban studies.

My aim is to cut into and across normally distinct histories, in order to show how various conceptions of acoustic and auditory spatiality have evolved over time and in connection to one another.

I therefore devote considerable attention to experimental projects, whether in science, music, art, or their interstitial spaces - including experiments that failed, were limited in their scope, had troubling ethical implications, or simply did not ‘succeed’ in entering mainstream discourses and canons, but that are nevertheless important because of their conceptual, technical, and aesthetic innovations.

It is within these experimental practices, those that test the boundaries of a field, that I find particular interest, especially with respect to ideas that defied conventional thinking and, in some cases, put wider social or cultural conventions under pressure.

In contrast to discourses that understand ‘space’ as a void to be filled with sound, my discussion shows that acoustic and auditory spaces have never been empty or neutral, but instead have always been replete with social, cultural, and political meanings. The case studies are chosen to reflect a particular progression both within and across them: how spatial conceptions of sound and hearing were hypothesised, codified, problematised, and politicised.

Stereophonica reveals how different concepts of acoustic and auditory space were invented and embraced by scientific and artistic communities, and how the spaces of sound and hearing themselves were increasingly measured and rationalised, surveilled and scanned, militarised and weaponised, mapped and planned, controlled and commercialised - in short, modernised.

Professor Gascia Ouzounian is a musicologist with the Oxford Faculty of Music and a member of Lady Margaret Hall.

Thousands of primaries benefit from Oxford oral language programme
Fireworks or fizzling out: How epidemics end?