Robert Burton was a scholar at the University of Oxford 400 years ago. He drew on the collections of the Bodleian Library and Christ Church, where he was himself Librarian, to seek to understand the human condition, in its full emotional range.

But his declared subject was 'melancholy'. The Anatomy of Melancholy, first published in 1621, is an extraordinary and enormous attempt to grapple with the causes, symptoms, and treatments of that universal human experience.

Four hundred years later, when clinical depression is stated to be the leading cause of global disability, and there are many challenges to our mental health, a new radio series for BBC Radio 4 is asking: how far have we come? And is there anything we can learn from Burton’s Anatomy of Melancholy to help us today? 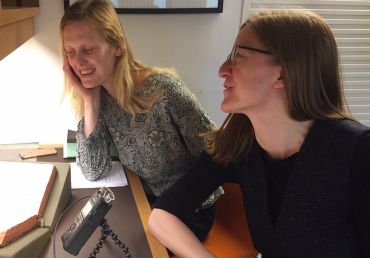 Amy Liptrot and Kathryn Murphy at the Bodleian Library
Writer Amy Liptrot has been digging into Robert Burton's massive 400-year-old text to uncover its riches and begins her journey at the Bodleian where she meets Dr Kathryn Murphy from Oxford’s Faculty of English, an expert on Burton’s Anatomy. Together they look at books Burton owned where you can see his hand-scribbled notes, and reflect on Burton as a person and an Oxford scholar who devoted himself lifelong to the task of anatomizing melancholy.

With Burton as a guide, the series hears from leading experts in mental health research today, and from those who manage their struggles with sadness and depression in a variety of ways - including the gardener and broadcaster, Monty Don, pioneering cell biologist and author of Malignant Sadness: the anatomy of depression, Lewis Wolpert, and a young survivor from the Manchester Arena attack. 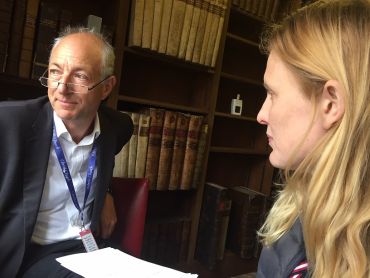 John Geddes and Amy Liptrot at Christ Church
Professor John Geddes, Head of the Department of Psychiatry at Oxford University, meets Amy at Christ Church Cathedral, beneath the bust of Burton, and speculates about the range of mood in The Anatomy. His own specialism in mood disorders and research into the use of wearables as a means of monitoring and managing mood has special relevance in the context of Burton who himself suffered from depression and mood instability.

Each episode takes on a different theme from Burton's Anatomy, covering causes such as: genetics ('an hereditary cause'), inflammation ('inflammations of the head'), inequality ('poverty and want'), trauma ('terrors in the night') and possible 'cures' such as nature, 'merry company', ‘divine music’, sleep, friends, exercise. 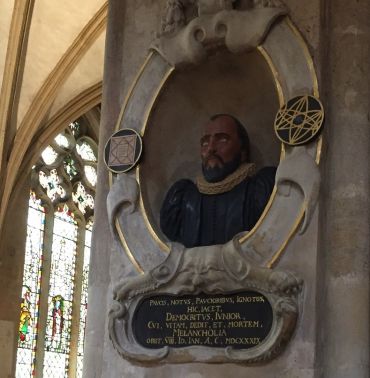 Bust of Robert Burton at Christ Church Cathedral
The presenter, Amy Liptrot, who has written about her recovery from alcoholism in her 20s and the impact of her dad's bipolar disorder, says: ‘In making this series, it's been fascinating to compare the cutting edge of today's psychiatry and people's 21st century experiences with depression, with the ideas of Robert Burton. It's often amazing how relevant and prescient he was, writing 400 years ago.

‘We've explored the part of melancholy in the human condition, how it can be alleviated and lived with - and the unique voice of Burton has been a brilliant guide though it all.’

The series shines a light on common experiences and connections over time and the ways in which science is catching up with the intuitions and understanding from 400 years ago and beyond.

Robert Burton talks about his own struggles with melancholy and reveals a personal vulnerability when he says: 'I write of melancholy, by being busy to avoid melancholy.' The series explores the potential of writing and reading to give purpose, better understand one's experiences and connect with others. Perhaps there has never been a better moment to pause and reflect on melancholy: ways to understand it, alleviate it and accept it.

Professor John Geddes is series consultant for The New Anatomy of Melancholy.

Dr Kathryn Murphy’s book Robert Burton: A Vital Melancholy will be published in 2021.

The Bodleian Library is curating an exhibition based around The Anatomy of Melancholy, due to open in the autumn, 2021.