In his new book, The Murderer of Warren Street, Professor Marc Mulholland, a professor of modern history at St Catherine's College, Oxford, reveals the true story of the notorious 19th-century revolutionary Emmanuel Barthélemy. This article, first published in the Irish Times, focuses on the last fatal duel held in England...

On a foggy morning in October 1852, two French men stopped at one of England’s great beauty spots, Priest Hill, a viewpoint near Windsor rising above the Vale of the Thames. Both were revolutionary republicans, socialists, and refugees from their home country. They took off their coats, received duelling pistols from their seconds and stood opposite each other. At signal, Frédéric Cournet advanced, took aim, and pulled the trigger.

Frédéric Cournet, was a large man, in his forties, who carried himself with the confidence of a former naval war-hero. He had led courageous resistance on the streets of Paris against the recent coup d’état against the constitution launched by President Louis Napoleon. Cournet had killed a guard to escape his captors and fled to London a wanted man.

Cournet’s duel was with Emmanuel Barthélemy, still in his twenties but with a lifetime’s experiences. Born of the working classes, Barthélemy had been a revolutionary conspirator since the age of sixteen. He had served nine years as a galley-slave after attempting to assassinate a police man. Little daunted, after release he fought as a barricade commander in a major workers’ insurrection against the bourgeois government. Arrested again, Barthélemy made international headlines by his daring escape from the notorious military prison Cherche-Midi in central Paris. Disguised as a priest, he slipped out of the country and made for England.

Why were these comrades of revolution meeting in mortal combat? Fundamentally, they were very different types. Victor Hugo, in his great novel Les Miserables, painted a pen-portrait. Cournet was “a burly broad-shouldered man, red-faced, heavy-fisted, daring and loyal”. He was “intrepid, energetic, irascible and temperamental.” Barthélemy was “thin and puny, sallow-faced and taciturn, a sort of tragic outcast.” Cournet was something of a blowhard. He was well-known as a bully and an inveterate duellist. Barthélemy was a fanatic: disciplined, ruthless, and filled with a cold rage against society.

It was an Irish man and graduate of Trinity College Dublin, Arthur Reeves, who explained the affair to a fascinated public. Reeves, who had spent 22 years living in France as a language tutor, kept company with the French political émigrés in London. The “boiling nature” of French blood, he reported, made them ultra-sensitive “upon the point of honour”. Cournet had spread rumours about Barthélemy’s girlfriend, suggesting she was a prostitute. Most men, knowing Cournet’s reputation, might have turned a deaf ear. For Barthélemy, however, the slight was not just personal. The dignity of his class and his revolutionary enterprise was at stake. Cournet refused to apologise and a duel was inevitable. 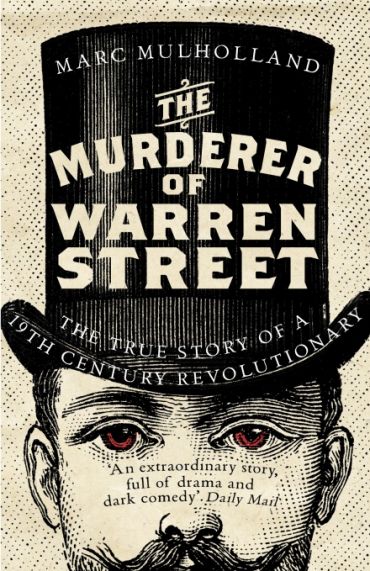 'The Murderer of Warren Street' by Marc Mulholland (Windmill)

Cournet confidently let loose his fire, but missed his aim. Now it was Barthélemy’s turn. He pulled the trigger, but the gun misfired. He tried again, it misfired again. In a growing frustration of terror, Cournet threw his weapon at Barthélemy’s head. “Use mine!” Barthélemy picked it up, took aim and fired. Cournet fell to the ground, mortally wounded. He died later that night in the nearby Barley Mow Inn. For years afterwards his ghost was reputed to haunt the place.

Barthélemy and the duelling ‘seconds’ - friends and assistants to the ‘principals’ - fled the scene, but the new electric telegraph system sent news ahead, and police arrested them at Waterloo station. They were charged with murder.

Duelling had been a common social practice. Prime Minister William Pitt, the Duke of York, even Daniel O’Connell, the Irish Liberator, had all defended their honour on the field. Though technically a grievous criminal offence, duelling was in effect permitted for aristocrats, officers and gentlemen. It was only denied to the common people. The normal practice was for suspects to be released on bail before being found ‘not guilty’. This had been a republican duel, however, and Barthélemy and his seconds were working class. They were flung in jail to await trial.

Once more a curious Irish connection comes into play. Just a few months before the duel, in July 1852, British soldiers had fired upon a crowd in the small manufacturing town of Sixmilebridge in County Clare, killing six peasants. The occasion had been a tumultuous election assembly, with locals under the leadership of their priests shouting against landlord influence, but there is little evidence that soldiers had been seriously provoked or threatened. British opinion was shocked not by the massacre, however, but by the jury of the coroner’s court bringing in a verdict of ‘wilful murder’ against the soldiers and the magistrate. This should have meant imprisonment of the accused until their criminal trial. Instead the Government-appointed Attorney General intervened to order their release on bail. Shortly afterwards he struck down the coroner’s court verdict.

At the Windsor Assizes, the lawyers defending Barthélemy and the others seized upon this legal chicanery. If soldiers could be released on bail as men of good reputation, they asked, why not these honourable duellists? It was an embarrassing moment for British justice, and a special appeal court had to be convened to adjudicate the point of law.

Unsurprisingly, the defence motion was denied, but in so doing the judges had to state with unprecedented firmness that duelling, in fact, was not a crime to be mitigated by honour. It could no longer be winked at as a suitable affair for gentlemen. An important principle had been established. This, as it turned out, would be the last fatal duel ever to be fought on these islands.

Barthélemy and the others were held on bail, went to trial, and were found guilty. The jury, however, brought in a verdict of manslaughter and the sentence was a mere six months. Barthelemy’s extraordinary career was far from over. Upon release, he planned the crime of the century - to assassinate Louis Napoleon, now Napoleon III, Emperor of the French. His furious temper got the better of him, however, and when his employer resisted Barthelemy’s attempt to extort revolutionary funds, a fatal fight ensued. In January 1855, in the falling snow, Barthelemy was hanged for murder outside Debtors’ Gate at Newgate prison.

The Murderer of Warren Street by Marc Mulholland is published in paperback by Windmill.