The cuneiform system is characterised by wedge-shaped signs on clay tablets, representing words or syllables in languages such as Akkadian and Sumerian.

Chronicling 'half of human history', cuneiform texts provide a rich source of information on the rise and fall of ancient civilisations and the daily lives of people of the past.

And with more than half a million original and unique artefacts in museums worldwide, cuneiform texts from ancient Iraq, Iran and Syria – dating from around 3500 BC to the year 0 – represent a resource richer than any other recovered from the ancient world.

The cuneiform system itself is characterised by wedge-shaped signs on clay tablets, representing words or syllables in long-forgotten languages such as Akkadian and Sumerian.

Working with colleagues around the world, Oxford's Professor Jacob Dahl has been co-leading a project to digitise and disseminate many of these important cuneiform texts. Most recently he has spearheaded a collaboration to include the cuneiform text artefacts in the National Museum of Iran (NMI) in the growing online corpus of cuneiform texts.

Professor Dahl, a member of Oxford's Faculty of Oriental Studies and a fellow of Wolfson College, said: 'Cuneiform texts cover half of human history, and the sources from ancient Iraq, Iran and Syria are richer than those of any other ancient civilisation. They cover all topics and genres and include thousands of private letters, lexical texts, literary compositions and above all administrative texts.

'The NMI collection is particularly important for the early period, when cuneiform writing was invented in Iraq and spread into Iran, where a related writing system called Proto-Elamite was developed. The sources for this still-undeciphered writing system are split between the Louvre in Paris and the NMI.

'The Cuneiform Digital Library Initiative, which I co-lead, has digitised much of the Louvre collection of cuneiform already, and bringing in the NMI therefore draws together two parts of the same ancient collection. The NMI also holds significant collections of clay tablets, bricks and stones featuring texts from other periods and in other languages – in particular Elamite and Old Persian – which are of interest to specialists well beyond the narrow field of Assyriology.' 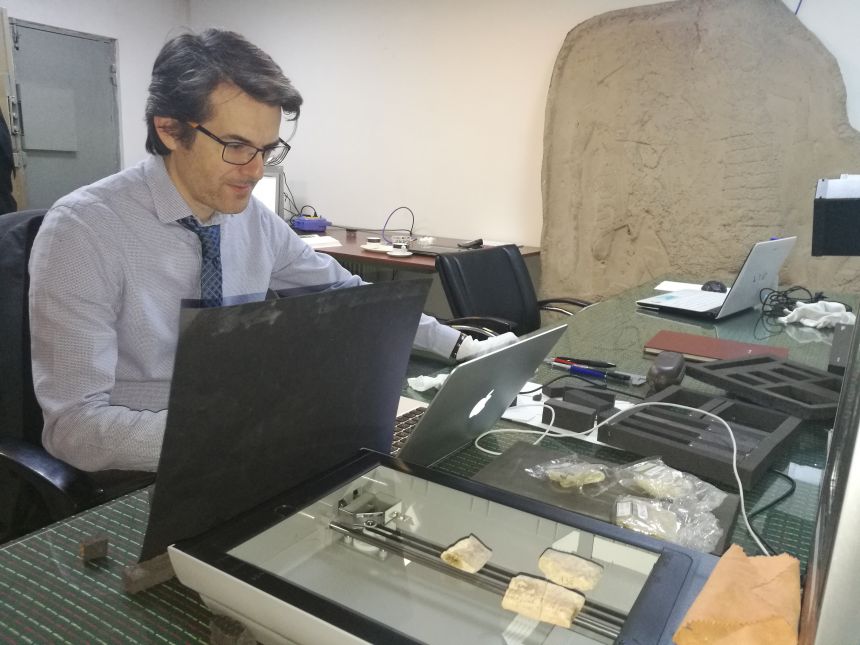 The digitisation project was proposed two years ago by Professor Dahl and Jebrael Nokande, Director of the NMI. The first group of Proto-Elamite tablets was scanned and digitised in January and May this year.

Professor Dahl said: 'Since beginning my work on Proto-Elamite tablets almost two decades ago I have waited for an opportunity to work on the texts in the NMI. I spent a lot of effort digitising cuneiform collections in Syria prior to the current unrest, which highlighted for me the need to secure all collections both here and abroad through digitisation and web dissemination.

'The field in general is in the middle of a digital transformation, and it is hard to overestimate the impact of making this collection openly accessible through the internet. Scholars will be able for the first time virtually to reassemble the ancient textual record recovered during the excavations of Susa (modern-day Shush in Iran). It will also open, I hope, avenues for collaboration and sharing of scholarly knowledge between researchers from Iran and the UK concerning a variety of topics, expanding beyond my own subject of Assyriology.'