Credit: Shutterstock. Whether stormed by President Trump supporters on 6 January, or as the ‘hallowed ground’ that formed the backdrop to President Biden’s inauguration two weeks later, the gleaming perfection of the Capitol's neoclassical architecture is an unquestioned part of its iconic status.

The US Capitol in Washington DC has been much in the public eye in recent weeks. Whether stormed by President Trump supporters on 6 January, or as the ‘hallowed ground’ that formed the backdrop to President Biden’s inauguration two weeks later, the gleaming perfection of its neoclassical architecture is an unquestioned part of its iconic status.

By contrast, in The Classical Tradition in Modern American Fiction, I take a more quizzical and, at times, sceptical approach to the American love affair with ancient Greece and Rome - and a long, hard look at American novelists’ predilection for classical allusion.

It asks what is at stake when seven key fiction writers of the 20th/21st centuries: Willa Cather, F. Scott Fitzgerald, William Faulkner, Ralph Ellison, Toni Morrison, Philip Roth, and Marilynne Robinson, refer to the work of Aeschylus, or Homer, or Virgil, or Ovid, in their explorations of modern identity and experience.

We tend to be far too reverential when faced with allusions to Greek and Roman literature...We tend to assume that such references bestow an immediate and universal authority...We are unthinkingly impressed

The project grew out of my perception, as a reader and a teacher, that we tend to be far too reverential when faced with allusions to Greek and Roman literature, myth, history or visual art. We tend to assume that such references bestow an immediate and universal authority on a text. We are unthinkingly impressed.

My own conviction is that we need to pay close attention when modern writers invoke the ancient past, because they often reach for distant heroes and stories in order to discuss some of the most pressing ideological issues of their (and our) times.

F. Scott Fitzgerald, for example, is obsessed in his fiction with a decadent and ultimately fallen ancient Rome, and he uses this motif to bolster a nativist and anti-immigrant conception of Americanness.

Willa Cather, in Sapphira and the Slave Girl, added many of her classical allusions and framing devices in a very late re-drafting stage - almost as an afterthought, she distorts the realities of slavery and racial injustice through deploying ‘Old Southern’ nostalgic and heroic tradition.

And Philip Roth disguises a visceral misogyny as ‘masculinity’, in his much-feted novel The Human Stain, through the repeated association between his protagonist, Coleman Silk, and Zeus.  In Ovid’s Metamorphoses, which Roth frequently invokes, Zeus is a voracious rapist, but Roth attempts to use him to shore up the sense of Coleman as virile hero.

Why do we tend to be such un-alert or acquiescent readers when it comes to antiquity?...we do not study Latin, Greek, or classical civilization at school

Why do we tend to be such un-alert or acquiescent readers when it comes to antiquity? One reason is that nearly all of us are hazy on the details, because we do not study Latin, Greek, or classical civilization at school. A working knowledge of the classical tradition appears now, for the most part, the preserve of an elite minority. If we are not exactly sure who Trimalchio, Hector or Leda is, when these canonical American writers call them up, we are most likely to nod our heads nervously and move quickly on.

The Classical Tradition in Modern American Fiction sets out to counter this process by insisting that the classical past is accessible to all. Complete with its own glossary of every classical name and concept discussed, as well as a guide to the best among the numerous online-resources, it is underpinned by my sincere conviction that all we need to do, when faced with an unfamiliar Greek or Roman term, is the blindingly-obvious: ‘look it up’.

My conviction is deeply-held for two reasons. First, in teaching these authors to my students over the years, I realised nearly all of them felt excluded from the entirety of classical culture. They needed encouragement to look things up but their confidence grew when they did. Second, I was inspired by my research into these each of these writers’ intellectual formation.

All we need to do, when faced with an unfamiliar Greek or Roman term, is the blindingly-obvious: ‘look it up’

Their contrasting backgrounds and experiences are striking. In the 1890s, Willa Cather studied Latin and Greek to a high level at the University of Nebraska in Lincoln. Philip Roth was highly-educated, including undertaking graduate studies at Chicago, but he never studied the classical languages. Marilynne Robinson has a PhD in English, but studied Latin at high school. Toni Morrison was a Classics minor at Howard. Meanwhile, neither Fitzgerald, Faulkner nor Ellison even completed their undergraduate degrees.

The time period which my chosen authors span, Cather was born in 1873, and Robinson (the only one still living) was born in 1943, encompasses a series of different eras in which classical traditions were variously significant: fin-de-siecle decadence, modernism, liberal humanism, the Great Books tradition and the culture wars of the 1980s. Yet, despite these novelists’ widely diverging contexts, and their widely diverging levels of formal education, they have in common an unqualified passion for reading, and a voracious auto-didacticism. 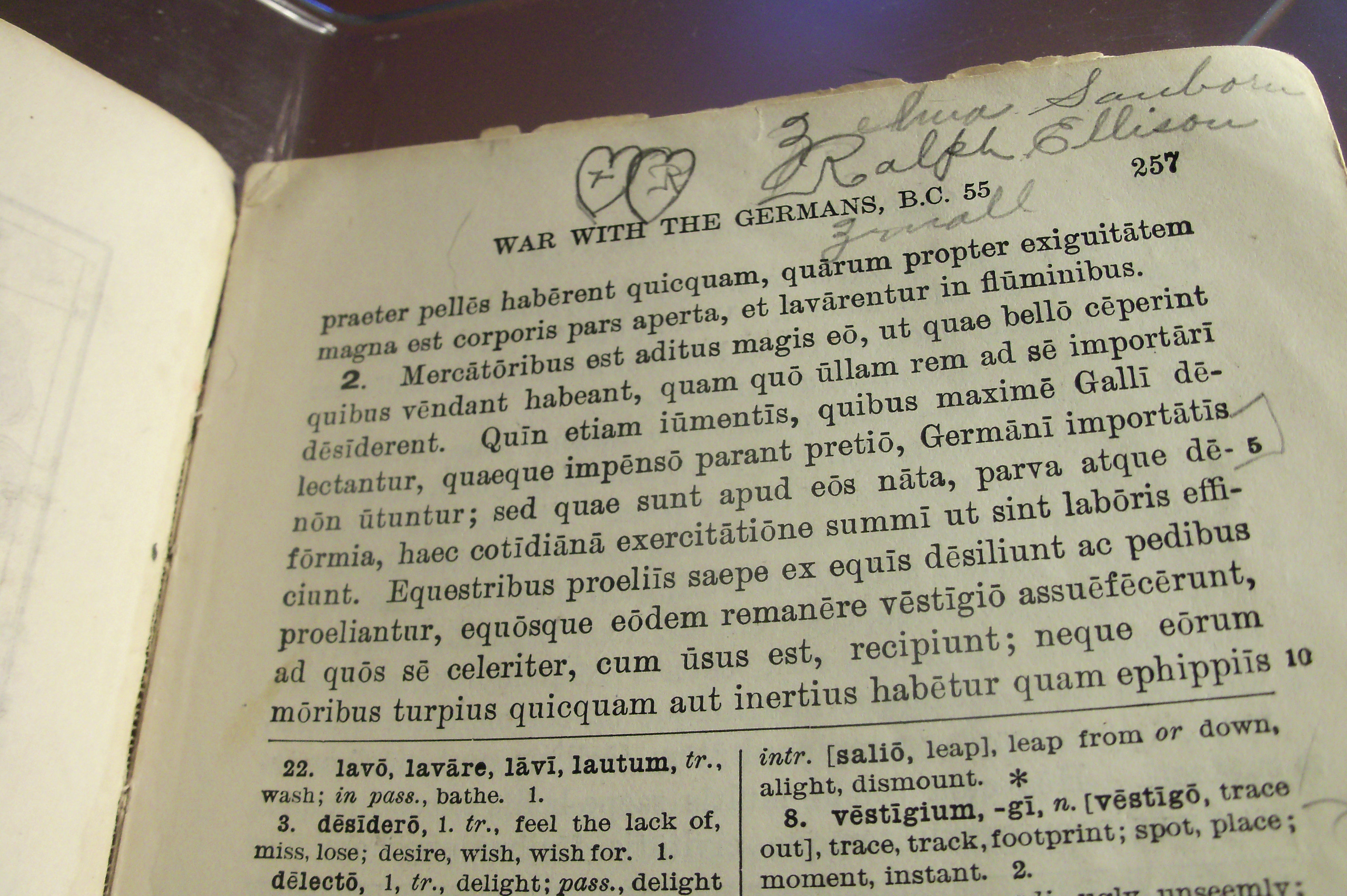 For me, encountering first-hand the annotations Ralph Ellison made, very often about African American life - in the margins of his translations of Aeschylus, was an unforgettable thrill. Ellison, born in 1913 in Oklahoma City, was so impoverished when he began his undergraduate degree at the Tuskegee Institute in Alabama that he rode ‘hobo’ on trains through the 1930s’ Deep South, to get there. His commitment to his own education, the extraordinary number of books he read, in numerous fields and his stalwart belief in the significance of the classical tradition to his own and to black American life, is a humbling and inspiring example I shall never forget.

The RAI is hosting a webinar book launch on 11 February to which all are welcome.

Register in advance at this link: https://zoom.us/webinar/register/WN_1wCpXBqbRa-w7NkDdwSgvA