Christian Frederick Cole was the first black African student to graduate from Oxford University. His attendance at Oxford was a racial equality milestone for the University that opened the door for other black students to follow behind him. Image credit: G.A Oxon

When is a picture more than a picture?

That question and many more were thoughtfully considered last weekend at the Re-imagining Cole symposium, held in celebration of Christian Frederick Cole, the first Black African student to graduate from Oxford University. His attendance at Oxford was a racial equality milestone for the University that opened the door for other Black students to follow behind him.

Although his legacy was widely celebrated last year, when a plaque was unveiled at the University in his honour, the image that was circulated as a representation of Cole gave many pause, and triggered a debate about race and representation at Oxford, that continues to this day.

Despite the fact that photography was introduced in 1839, apparently the only image of Cole is a cartoon illustration drawn, in 1878. The illustration verges dangerously close to parody, and some would argue, reinforces the racial stereotypes that Cole’s commemoration had been intended to help counter.

A gowned and open-mouthed Cole is shown on the steps of the Mitre Hotel on Oxford’s High Street, holding a banjo - though thankfully not tap dancing, swaying in a way that implies he could break into a dance at any moment.

Pamela Roberts, Director of Black Oxford Untold Stories, who campaigned for and unveiled Cole’s plaque, said: ‘It made me wonder, why is this the only image of Cole, who produced it and for what purpose?’

She trawled University archives and photographic cartoon catalogues, channelling her curiosity to find a non-caricature image or photograph of Cole into a body of research. This work formed the foundation of the symposium. The public event held at the Bodleian Libraries’ Weston Library, unpacked the background and context of previously unseen caricatures of Cole, and explored why his historic academic achievements were only portrayed as parody. What exactly is so funny about a black man being successful?

The event examined the broader issue of race and representation in art, how Cole’s image contributed to the reinforcement of stereotypes and how these stereotypes stimulate unconscious biases which shape the collective psyche of the University.

The programme brought together academics, historians, students and members of the local community to discuss and debate the ‘reimaging’ of Cole’s image. Some leading academics and artists including: Dr Temi Odumosu (Malmö University), Kenneth Tharp CBE, (Director of the Africa Centre),  Dr Robin Darwall-Smith (University College, University of Oxford), Robert Taylor (photographer of ‘Portraits of Achievement’) and Colin Harris (cataloguer of the Shrimpton Caricatures collection at the Bodleian, from which the caricatures of Cole are taken), took part in presentations and round table discussions which brought Cole’s legacy to life.

Attendees were then invited to share their personal perceptions of Cole and the impact that his legacy has had on them. During discussions Cole was described as an inspiration, and the event itself as ‘enlightening’ and ‘much needed’.

One student said: ‘As a Black Masters student it is important for me to hear about founding fathers and those who have gone before me, so a huge thank you for organising this!’

Another highlighted a broader need for events of this kind in academia and beyond: ‘More discussions like this need to be had on a wider scale. There is too much negativity in the media about diversity and representation especially regarding top institutions, so it was refreshing to be part of such an encouraging and celebratory discussion about such an inspirational scholar.’

Dr Alexandra Franklin, Coordinator of the Centre for the Study of the Book, at the Bodleian Library, said: ‘The Bodleian Libraries are grateful to Pamela Roberts for convening a symposium full of ideas, debate, and drama. These scholarly exchanges bring archives to life.’

Of the event’s impact, Pamela Roberts said: ‘I am delighted that the symposium reached such a broad, diverse audience. The roundtable discussion concluded that Cole was not only part of Oxford’s story, but Britain’s story and a re-imagined image will afford him the gravitas and greater meaning his achievement and legacy deserve.’ 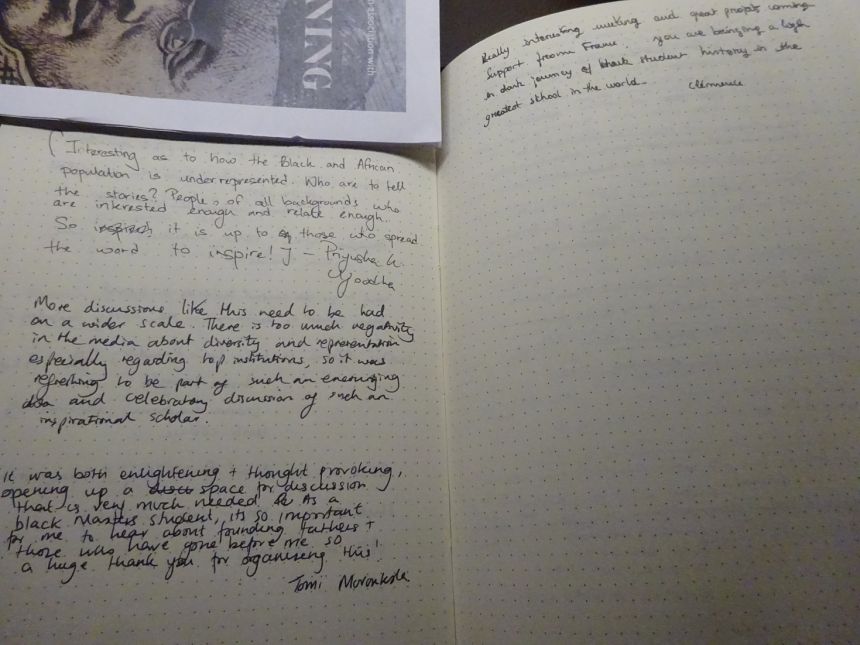 Comments from some of the students who attended the Re-Imagining Cole Symposium
The Last Days of Wilfred Owen
'Know thyself': an immunologist’s reflection on the legacy of the Nobel Prize in Medicine and Physiology