Professor Tim Palmer from the University of Oxford’s Department of Physics has today received the Royal Astronomical Society’s 2023 Gold Medal for Geophysics for his outstanding work in advancing the understanding and prediction of climate and weather.

The Gold Medal is the Royal Astronomical Society’s highest honour and can be awarded for any reason, but usually recognises outstanding lifetime achievement. It was first awarded in 1824, with previous winners including Albert Einstein, Edwin Hubble, Arthur Eddington, and Stephen Hawking. Since 1964, two Gold Medals have been awarded each year: one for astronomy, and one for geophysics.

‘I am delighted to receive this award. Throughout my career, I have always been very motivated to do something of practical importance for society, but in a way that used the sophisticated theoretical and mathematical techniques I had been trained in. It is wonderful to have this formally acknowledged’ Professor Palmer said.

Tim’s work in weather and climate prediction has revolutionised the field – work that is ever more essential as we collectively strive to understand and thus tackle the challenges of climate change. Congratulations to a wonderful colleague on this richly deserved honour.

Professor Ian Shipsey, Head of Department at the Department of Physics, University of Oxford

Professor Palmer came to the University of Oxford as a Royal Society Research Professor in 2010, a scheme that recognises world-class researchers of great potential. One of his most influential contributions to atmospheric science is the development of ensemble forecasting, a method that only became possible with the advent of powerful computers.

Before this, weather forecasting was treated as a deterministic problem, where it was assumed that with enough observations in the initial conditions it was possible to predict the outcome with 100% certainty. But this failed to account for the intermittent instabilities that occur in chaotic systems like weather. During periods where intermittent instabilities are strong, uncertainties, no matter how small, can grow rapidly and destroy any chance of making reliable deterministic predictions.

Professor Palmer pioneered an approach where, instead of running a single forecast, a computer simulation of a weather system is run multiple times using slightly different starting conditions and equations. Comparing the outcomes of these different simulations produces an estimate of the forecast uncertainty and indicates how likely different weather events will be.

Not only did this revolutionise the field of weather forecasting, but ensemble forecasting has led to the development of a wide range of operational products, including tools that allow disaster relief agencies to take anticipatory action: sending food, medicine and even finance, ahead of an anticipated extreme weather event, rather than reacting after the event has happened.

More recently, Professor Palmer has researched how ensemble forecasting can help predict uncertainty in many other fields, including COVID-19, economic, and conflict prediction. His popular science book The Primacy of Doubt, published in 2022, introduced these ideas to a wider audience, by explaining how the geometry of chaos can help  make sense of uncertainty in a rapidly changing world. 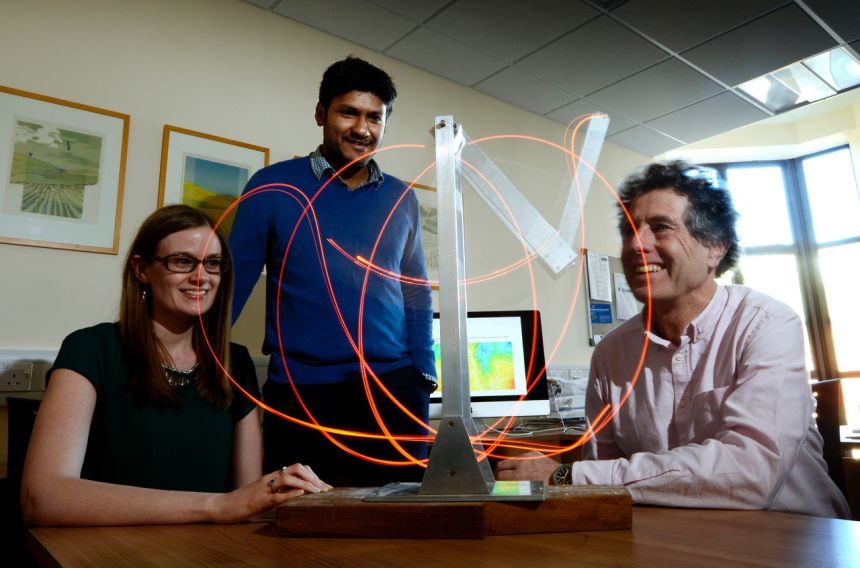 Professor Tim Palmer (right) and two members of his group studying the chaotic motion of a double pendulum. Image credit: Department of Physics, University of Oxford.

Nevertheless, Professor Palmer originally started his career in a very different field, studying for a doctorate in general relativity and relativistic astrophysics at the University of Oxford in the mid 1970s. During this time, he became aware of the work of Oxford Professor of Physics Raymond Hide, who developed highly influential mathematical models to interpret large-scale flows in the atmospheres of the Earth and other planets. Ultimately, this inspired Professor Palmer to change fields after completing his doctorate, and move into climate dynamics and prediction.

I would like to thank Oxford University and Jesus College for their considerable support, the European Research Council for being a major source of funding throughout my time at Oxford, and the European Centre for Medium-Range Weather Forecasts. I am also very grateful to the Royal Society for funding my position and giving me considerable academic freedom to pursue and develop my ideas.

Reflecting on his award, Professor Palmer said: ‘In a sense, winning this award feels like coming full circle, since the Royal Astronomical Society was the first learned society that I joined and I attended many meetings as a DPhil student. When I changed fields to climate physics, I sought to apply the sophisticated theoretical and mathematical techniques I had learned from astrophysics to climate forecasting. So, it is particularly gratifying to receive such a prestigious award from my “alma mater” learned society.’

The award also reflects Professor Palmer’s contributions to science and society, which includes his position as President of the Royal Meteorological Society between 2011-2012. He was involved in the first five Intergovernmental Panel on Climate Change (IPCC) assessment reports, and served on various government committees to examine issues from climate adaptation to the role of science in helping mitigate the humanitarian impact of natural disasters. To date, Professor Palmer has published over 260 research papers in international peer-reviewed journals (including 13 articles in Nature), which have attracted over 25,000 citations.

In the near future, Professor Palmer remains committed to championing the need for a ‘CERN for Climate Change’: an international centre of excellence for climate research. ‘Developing accurate models that simulate climate at extremely high resolution is a challenge that can’t be solved easily at a national level – just as discovering the Higgs boson couldn’t have been achieved at the national level’ he said.