The University of Oxford has been selected to help deliver the Met Office Academic Partnership (MOAP) for a further three years, as part of a multi-institutional agreement supporting cutting-edge research in the science of weather and climate prediction.

The Met Office Academic Partnership gives the University the opportunity to enhance its contributions to weather and climate science. By working with the Met Office and other partners we aim to accelerate our research and to extend its impact and reach, including influencing global bodies such as the Intergovernmental Panel on Climate Change (IPCC) and providing advice to governments around the world to help shape their policies. 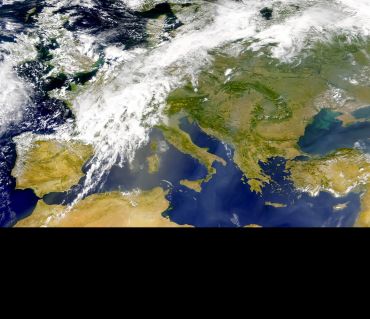 The University of Oxford is playing a leading role in developing improved methods for climate simulations and calculating the probability of extreme weather events. Image credit: Shutterstock.
The renewed agreement will build on the University of Oxford’s longstanding partnership with the Met Office, which began in 2013. Over the past five years, Oxford academics and Met Office scientists have collaborated on 24 joint research projects and co-authored 169 peer reviewed publications. Highlights of this work include:

Professor Tim Woollings in the Department of Physics, who chairs the Oxford partnership with the Met Office, said: ‘We are delighted that our partnership with the Met Office is continuing and developing, and that the wider MOAP network is flourishing. We face many challenges in understanding how our climate is changing and how to both mitigate and adapt to these changes. Networks such as MOAP help to bring our national expertise together to most effectively meet these challenges. Joint projects provide academic breadth and insight to the Met Office and give Oxford scientists access to data, modelling, and expertise at the Met Office.’

Professor Stephen Belcher, the Met Office’s Chief Scientist, said: ‘Extreme weather events and climate change pose among the greatest risks facing humanity. Tackling them is an urgent and huge undertaking. The Met Office can’t do it alone – the Met Office Academic Partnership harnesses the best of UK research and will give us the best chance of coping with and adapting to future change.’

The other institutions currently in the MOAP are the Universities of Birmingham, Bristol, Edinburgh, Exeter, Leeds, Reading, and University College London, UCL.

You can learn more about the MOAP at Oxford here.