Host Richard Ovenden OBE, Bodley’s Librarian, said: ‘Today we present Oxford’s solidarity with Salman Rushdie and of the right to freedom of expression and for open society.'
Published

Prominent figures from the literary world came together, alongside students from the University of Oxford, for an event in solidarity with Salman Rushdie at the Bodleian Libraries.

In his opening address, host Richard Ovenden OBE, Bodley’s Librarian, said that Salman Rushdie, who survived an assassination attempt in August 2022, was ‘through the powers of modern technology, watching from afar’. Adding: 'We are delighted to welcome especially members of the Rushdie family'. 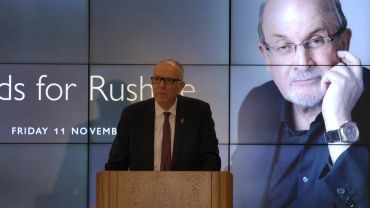 Richard Ovenden opens Oxford Reads for Rushdie
Author Sir Salman Rushdie lost vision in one eye and the use of one hand following a stabbing attack at the Chautauqua Institution in New York State where he was about to give a speech.

Richard Ovenden, who is also Oxford University's Head of Gardens, Libraries and Museums, continued: ‘Today we present Oxford’s solidarity with Salman Rushdie and of the right to freedom of expression and for open society. We are joined today by writers and by Oxford students to read the words of Salman Rushdie; words that have been under attack for almost four decades.

‘Salman Rushdie is one of the most successful, widely read and studied, and critically acclaimed writers of modern times. He has written 12 novels with a 13th Victory City to be published next year.’

During Oxford Reads for Rushdie, which was held at the Weston Library on November 11, Ian McEwan read from this forthcoming book.

Other readings came from works including Haroun and the Sea of Stories, Midnight's Children, The Satanic Verses, Shame, Two Years Eight Months and Twenty-Eight Nights, Yorick in East, West, The Moor's Last Sigh, and Quichotte.

You can watch the full Oxford Reads for Rushdie event online here (event begins 07:35 on the clock).

Oxford Reads for Rushdie was held in partnership with English PEN. It follows an event at the New York Public Library organised with PEN America, which was held immediately after Rushdie was attacked, and an evening of solidarity organised by English PEN and others at the British Library in October.

In hosting the event, the trio wanted to publicly mark both the Bodleian's and the University’s longstanding commitment to protecting academic freedom of expression.

Richard Ovenden added: ‘The Bodleian has a proud tradition of supporting freedom of expression. In the 1660s and the 1670s, when the works of John Milton were banned by Royal Proclamation and all copies were ordered to be burned, Bodley’s Librarian refused to surrender a special copy of his works – which had been presented to the library by the poet.

‘We stand firmly with Salman Rushdie today in the wake of this horrific attack. We are proud to protect the freedoms of all writers, who are fighting to protect their right to write and publish whatever they want to, and in turn, those of readers, who have the right to read and hear them.’

Watch Zadie Smith read her short essay dedicated to Salman Rushdie following his stabbing on 12 August 2022. The reading was recorded at the time of Oxford Reads for Rushdie. During the event itself Zadie Smith read from the first page of Midnight's Children.